Wacky infomercial creates quite a stink 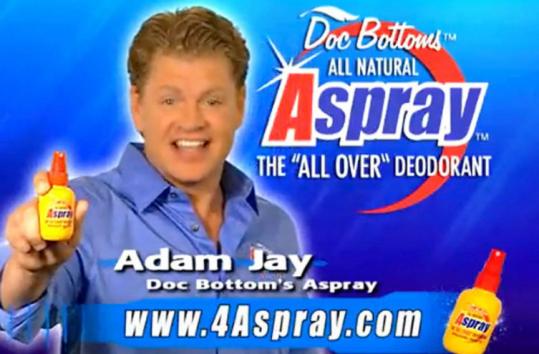 WASHINGTON - Once upon a time in this great land, there was a roofing contractor. His name was Adam. He lived on Long Island, N.Y.

It came to pass that Adam had an idea for a personal grooming product, and because this is America, where anybody can do anything, Adam begot something so completely and wonderfully absurd that he took to the airwaves to advertise it him-self.

And so there came to be Doc Bottoms Aspray, billing itself as the first “All Over’’ deodorant.

The resulting two-minute infomercial, featuring wildly enthusiastic Adam Jay Geisinger as pitchman, is so cheerfully mortifying that it reaches its own level of art. It showcases green gases emerging from various body “odor zones,’’ a construction worker musing that “I got odor in special places,’’ people spraying their “privates’’ and Geisinger shouting the unforgettable tag line: “NO BACTERIA, NO STINK!’’

Think of a blond and beardless Billy Mays, as directed by Ed Wood.

MSNBC says it aired the ad once a couple of weeks ago, in the television graveyard of 2 a.m. to 5 a.m. The channel pulled the spot immediately.

Even by the Wild West standards of infomercial-dom, Doc Bottoms is being greeted with awe.

“I just couldn’t believe it was real,’’ says Remy Stern, author of “But Wait . . . There’s More!,’’ a history of the infomercial biz. “I’d put it right up there near the top of the all-time most ridiculous ads.’’

And he means the bigs, the Hall of Fame, the Infomercial Unforgettables.

Hallowed icons like “I’ve fallen and I can’t get up!,’’ and the HeadOn commercial about a topical analgesic you rub on your forehead - though all the ad ever really said was “HeadOn! Apply directly to the forehead!’’ over and over and over again until you threw a large rock through the television.

Geisinger is 38 years old, married to Wendi Rogers, who was a stalwart on infomercials in the 1990s with beauty products. He’s explaining the genesis of Aspray. He thought of such a product in his truck about two years ago, because, “Frankly, I needed it.’’

A contractor who sells roofing, siding, and other outdoor building materials, he works up a working man’s sweat during the day. Afterward, he likes to go to the gym. The result, he said, was that “the funk was building up.’’

He looked for an antibacterial product that could be sprayed all over the body, didn’t find much, worked with his wife and a “team’’ that developed a product without alcohol, aerosols, or other irritants. It’s designed to stop odors before they start, not just mask them, he says. The product is licensed.

He swears business is fabulous, never mind those prudes at MSNBC. He slapped it on YouTube, and it’s garnered more than a quarter-million hits in two weeks.

“We’ve created a monster,’’ he says. “The reaction from the public has been unbelievable.’’