The best of ‘Ted’; psyched for ‘House’ 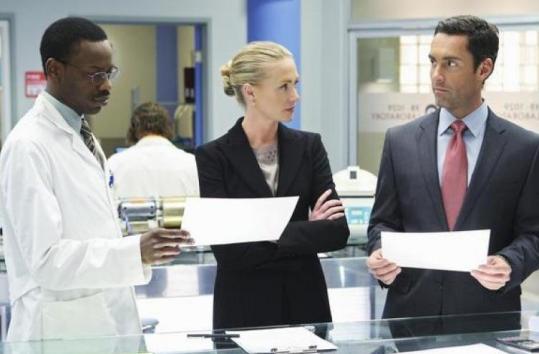 Q. For some reason, I watch “Better Off Ted.’’ I don’t think this is because it is actually good.

Matthew: Yes, “Better Off Ted’’ is almost good. I keep wanting it to break into greatness. Still waiting. Love Portia de Rossi, though, and the faux commercials.

Joanna: She is funny. And I love the other blonde. What’s her name?

Q. Supposedly some episodes of “House’’ next season will be shot in the psych hospital. Lot of potential there, don’t you think?

Matthew: Yes, it could be interesting. Is “House’’ as revelatory as it was early on? No. But is it still interesting and challenging? I say yes. The writers are bold, and I like that. They match House’s personality. The writing of the show mimics House’s crazy brain, in a way.

Q. Do you think there will be a “Sopranos’’ movie?

Matthew: I hope not. I still can’t forgive “Sex and the City.’’ The movie tarnished the show’s legacy, as far as I’m concerned.

Joanna: The only thing I could see them doing with any integrity is a story that has nothing to do with Tony Soprano. A prequel or something. But why? Besides money. Which is never a motivating factor in these situations, as you know.

Q. Is “Rescue Me’’ going to end with Denis Leary dying?

Matthew: Leary would love that. He keeps mentioning it. But I don’t think so.

Q. I only watch occasionally, but his character is so self-destructive.

Matthew: Yes, and heroic too. It’s an interesting mix. He saves others, but not himself. Thus the title.

Joanna: If I had to count all seasons, I’d say 6 The first season was more of a 7. In isolation.

Matthew: “All in the Family.’’

Matthew: Depends on the last season.

Check out the full chat transcript at www.boston.com/viewerdiscretion.