All the drama in half the time (plus laughs!) 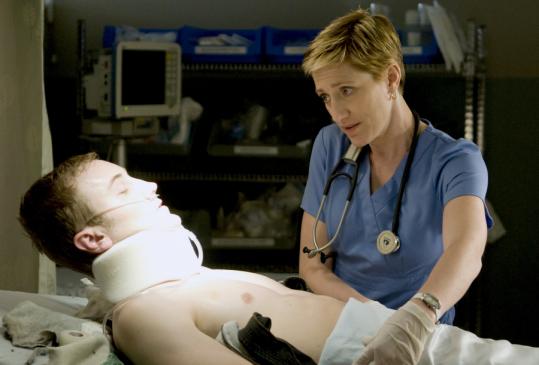 Edie Falco stars in "Nurse Jackie," a cable show that is neither a sitcom nor a dramedy. (Ken Regan/Showtime.)
By Matthew Gilbert Globe Staff / July 12, 2009
Text size – +

In an Emmy-worthy turn, Ivey plays malevolent nurse Paula, fuming with cigarette smoke despite her imminent death from lung cancer. Paula is unsympathetic to the bitter end, a machine gun of angry punch lines. Her closing sentiment from her ER bed? “[Expletive] you, here’s to me.’’ Paula’s warlike exit is definitely not moving; it is pathetic and - as the finale of a nurse who couldn’t nurse herself - ironic.

The writers of Showtime’s extraordinary “Nurse Jackie’’ understand that, sometimes, we don’t end up laughing or crying. Life as we know it does not resolve to either comedy or tragedy, communion or division, summer or winter, Dickens or Shakespeare. The traditional Janus masks are convenient - but simplistic - storytelling symbols. There’s a vast hinterland of mixed feeling in the contemporary human experience, complicated emotions and thoughts that don’t easily fit on the familiar “happy-sad’’ spectrum. And cable TV, in its continual evolution and innovation, has generated yet another genre to cover that gray turf: Let’s call it the grimedy.

Grimedies are being manufactured primarily in the Showtime factory, with “Nurse Jackie’’ as well as “Californication,’’ “United States of Tara,’’ “Secret Diary of a Call Girl,’’ and “Weeds.’’ Recently, though, HBO joined in, with “Hung.’’ These are all half-hour shows, but they share a piquant, realistic spirit that isn’t nearly sitcommy.

Technically speaking, grimedies are made as single-camera sitcoms, the more movie-like filming style that isn’t live on stage, doesn’t tend to use laugh tracks, and can easily shoot on location. Across the decades, they’ve ranged from “The Andy Griffith Show’’ to “Sex and the City’’ and “Entourage,’’ and now, on the networks, “The Office’’ and “30 Rock.’’ But grimedies hinge on darker themes, are more tinged with present-tense despair.

Nor are they dramedies, the hourlong hybrid that David E. Kelley pioneered in the 1990s with shows such as “Ally McBeal.’’ Dramedies - from “The Days and Nights of Molly Dodd’’ to, more recently, “Eli Stone’’ - are fluffier and more whimsical. They ricochet strictly within the drama-comedy spectrum, and they often rely heavily on magic realism, as they navigate the characters’ fantasy lives.

No, the tone of the grimedy is hard to encapsulate - it’s farcical, satirical, cynical, realistic, dramatic, poignant, hopeless, and affectionate, almost all at once. And that is its beauty. This genre is not a comedy with dramatic moments (“Scrubs’’), or a drama with comedic flourishes (“The Sopranos’’), so much as a queasy, provocative blending. Grimedies recall some of the darkly funny, acerbic social criticism of Paddy Chayefsky, writer of the films “The Hospital’’ (1971) and “Network’’ (1976), except that as TV series they are steeped in weekly character development. They are more rooted in the intimate journey of a person - Edie Falco’s Jackie, say, or Toni Collette’s Tara, who has multiple personalities - than the workings of a generalized American system or institution.

In a recent interview, Edie Falco told the Globe that even she hasn’t quite known how to categorize her own show. “I always thought I was signed on for a drama,’’ she said. “And then I found out that Showtime bought a comedy. So there were times when I had no idea what the hell we were making!’’ Set in a New York City ER, the show invites you to watch Jackie secretly abusing drugs and cheating on her loving husband, then laugh at the young male doctor who grabs women’s breasts when he has anxiety attacks. (Also bringing on laughs: Eve Best as Jackie’s jaded best friend and Merritt Wever as Jackie’s innocent student.) “Luckily, from an acting standpoint, you deal with it all the same way,’’ Falco said. “You approach it from the same vantage point of reality.’’

The defining element of a grimedy is how it confounds easy judgment. In that way, these shows are akin to the new wave of hourlong dramas that came up during the 2000s. “Dexter,’’ “Rescue Me,’’ “House,’’ “24’’ - they’re all defined by their morally ambiguous heroes, by the way their main characters can’t be quickly reduced to villain or saint, by the way they force the viewer into an active engagement with what’s on TV.

The grimedy may be more condensed than these full-on dramas, the humor more obvious; but the characters are no less ambiguous. Ray Drecker (Thomas Jane) in “Hung’’ is selling sex for money, but he’s such an Average Joe, and so browbeaten by the failing economy, he’s hard to fault. Hank Moody (David Duchovny) in “Californication’’ is a two-timing sex addict and an irresponsible parent, and yet he is a burning romantic in an increasingly cold world, a brilliant writer fighting against media overload.

The grimedy is about as far from escapist comedy as you can get. These shows are very much set in the here and now, and, across each season story arc, their characters wrestle with fractured lives riddled with conflict and secrecy. They represent the kind of TV that speaks to the weight of the world these days, as the country deals with economic recession and war. But the grimedy is a flexible structure, too, that allows for wry humor amid pathos, flippancy amid tragedy, wit amid affliction. It’s shorter than drama, and, happily, more elastic.