With teen mothers so visible on television, it may surprise that an MTV series makes the best argument for abstinence 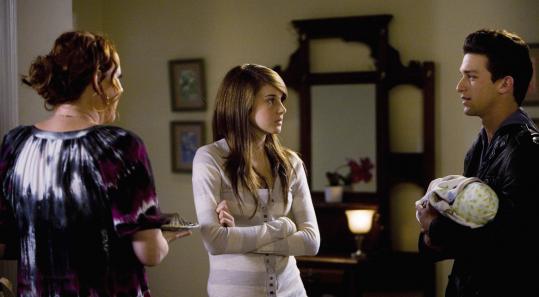 Amy Juergens has to be the luckiest teen mother in America. She still lives in her cozy suburban home, where her parents help her put her infant son to bed. The baby’s father - a one-night-stand-turned-responsible guy - comes by nightly to cuddle with his son while she attends to her history homework. The kids in school admire her newly-ample breasts.

So we learn on tomorrow night’s second-season premiere of ABC Family’s hit series “The Secret Life of the American Teenager.’’ The story line that ended last spring with the birth of little John now picks up with a similar tone: Amy whines about how hard it is to manage her new life while everyone around her pitches in to help.

Every real-life mother, teenage or not, will tell you it isn’t so easy. Even Sarah Palin’s daughter Bristol, whose teen pregnancy was touted as a happy tale of family values during election season, changed her tune once reality set in; she abandoned the idea of marriage, skipped her high school graduation, and had to take jobs to pay for diapers. She told People magazine last month that “if girls realized the consequences of sex, no one would be having sex.’’ Of course, she also had her glamour shot with her baby on the cover.

By its very nature, every portrait of teen pregnancy on TV is an unsettling mix of precaution and glamour. Even E’s “True Hollywood Story’’ has come up with a version: the breathless “THS Investigates: Teen Pregnancy Nightmares.’’ Pregnant teens now have the chance to be on MTV, in the new documentary series “16 and Pregnant’’ - a title that, given the network’s fascination with the ultra-rich, conjures up images of shopping sprees at baby boutiques and infants as fashion accessories.

But this show, which tracks a series of girls from pregnancy through the first few months of their babies’ lives, turns out to be a far cry from the glossy world of Paris Hilton and her best friends. It’s raw, unflinching, unsettling, and a far clearer argument for absti nence than the supposedly-safer fare on ABC Family.

Teen pregnancy has long been the subject of handwringing - remember that supposed pact by high school girls in Gloucester? - especially as it’s been glamorized by celebrities and treated, in movies like “Juno,’’ like a cute problem solved with little emotional scarring. A recent study by the Columbia University Mailman School of Public Health and the Guttmacher Institute found that teen contraceptive use has gone down in recent years, while teen pregnancy rates have gone up. And while teenagers have plenty of role models, it’s easy to blame TV: A study in the journal Pediatrics last fall found that teens who watch steamy programming are far more likely than their counterparts to get pregnant.

“16 and Pregnant’’ isn’t steamy in the least; it’s about the rough consequences of sex, not the joys of it. “Secret Life’’ is a little more complicated; it’s about exploring the characters’ different approaches to sex, so while they don’t do much on camera, they talk about sex a lot.

That’s not unusual, as ABC Family goes; despite the name and the 12-and-older target audience, the network has never purported to be innocent or pure, and series like “Greek’’ and “Kyle XY’’ have their share of illicit behavior. Still, everything the network airs has a lighter, safer tone than anything on, say, the CW. “Secret Life,’’ ABC Family’s biggest hit, has beaten the CW’s racy “Gossip Girl’’ among 12- to 34-year-olds whenever the shows have aired at the same time.

“Secret Life’’ comes from Brenda Hampton, the creator of the pious “7th Heaven,’’ and it does offer arguments for abstinence, both subtle and overt. “Listen and listen good. Do not have sex. This is what it leads to,’’ Amy tells her friends while she’s in labor. But in an effort to cosset young viewers from the harshness of the truth - to stay family-friendly - it glosses over the consequences of pregnancy, presenting a world surrounded by gentle padding and a cushiony safety net.

Amy gave birth to John in a hospital room that looked more like a hotel suite, complete with couch, end tables, and well-appointed lamps - and nary a piece of medical equipment in sight. Even divorce, in this show, is a stunningly gentle affair: Amy’s parents split amicably while making jokes, and when her father moved out, he bought the house next door.

The teens on “16 and Pregnant’’ have no such luck; this series is filled with bad teeth and bad furniture, babies crying uncontrollably, young mothers at their wit’s end. (What makes it MTV-ready is the shameless hawking of music: During dramatic scenes, some text pops up onscreen, telling us what’s on the soundtrack.) In the premiere, Maci, a cheerleader from Chattanooga, Tenn., gives birth to a boy named Bentley. She gets some baby-sitting help from her parents. But they encourage her to live in a depressing apartment with Ryan, her lug nut of a boyfriend, who rounds up his guy friends to go sing karaoke while Maci struggles to feed the baby and finish her college homework.

Ryan, who works the night shift as a diesel mechanic, reacts to the baby largely by ignoring it. In one particularly painful scene, Maci desperately hands off Bentley so she can do some schoolwork. Ryan brings the baby to bed, hiding under the covers while his son wails miserably beside him.

It’s clear that things are hopeless, whether Maci and Ryan stay together or not. And what’s especially gut-wrenching is imagining their son as he grows older, struggling with a neglectful, resentful father. If Ryan is going to have an a-ha moment about parenthood, the cameras won’t be around any longer to capture it.

That the cameras were there to begin with represents a fairly striking cultural shift. Certainly, teen pregnancy has long been the subject of issue-driven soap operas and young-adult dramas; back in 1980, a young Rob Lowe starred in an After School Special called “Schoolboy Father,’’ playing a high schooler who tried to raise his son, but wound up giving him up for adoption.

That’s been the typical scenario. AMC’s “Mad Men’’ shows us that once a pregnancy could be hidden from sight and willfully forgotten. ABC’s “Desperate Housewives’’ played the issue for laughs; Bree wore a padded belly to cover for her teenage daughter’s condition. The daughter eventually reclaimed the baby.

The CW’s remake of “90210’’ had a lengthy pro-adoption story line this season as well. High school student Adrianna gave her newborn daughter to a loving couple while her mentor, Brenda, adopted a baby from China.

But without a full-term pregnancy, there wouldn’t have been a “Juno,’’ and “The Secret Life of the American Teenager’’ likewise wouldn’t have existed without the promise of a baby this season. Adoption or abortion were given lip service, but never were likely scenarios. And while Amy’s father once referred jokingly to the “good old days’’ when they would have pretended to send their daughter to “camp’’ during her term, no one really reacted to Amy’s pregnancy with anything but sympathy. If Amy’s classmates were shocked, it was only because they’d discovered that teen pregnancy can happen to good girls, too. The sharpest sarcasm came from Amy’s mother, but that was probably because she’s played by Molly Ringwald, who all of these years later, still acts like a sullen teen.

Because Ringwald is pregnant with twins in real life, the writers have spun her condition into the story: Amy’s mother, who’s in the process of getting divorced, has sex on a first date and winds up pregnant herself. Again, there’s little in the way of judgment - just a few choice jokes and the promise of a farcical plotline down the road. Amy has purportedly suffered through her own ordeal, what with the worry and the homework and the labor pains. But there’s a lot about her life, in a comfortable suburb where everyone speaks in sitcom-style dialogue, that still seems aspirational.

“16 and Pregnant’’ is also striking for its not being judgmental; the show’s website includes a link to the National Campaign to Prevent Teen and Unplanned Pregnancy, but no one utters a word of preachiness or a suggestion of regret. Maci struggles, but perseveres; in social settings, she’s the subject of open-minded fascination. Her friends support her, even if they don’t understand her (they want her to join a dance squad shortly after giving birth). Her challenge isn’t shame so much as logistics.

Commenters on the show’s online message boards seem to react accordingly. Some write in to wish the couple well, or to share their own stories of teen pregnancy that turned out right: “It is not easy being young parents and you miss out on a lot. But if you stick together it is well worth it in the end.’’

Still, a few viewers, if they are indeed teens, appear to be getting a starker message. “im 16 myself,’’ one wrote, “and after watching this show im not having sex until i am married.’’