Conan O'Brien's time has come. Will the Leno faithful follow? 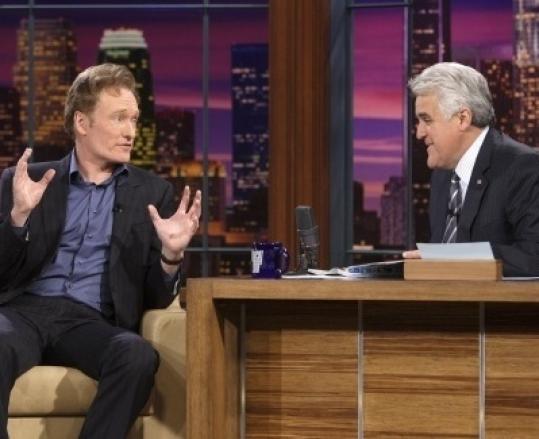 Conan O'Brien is inheriting the best job in television at what might seem the worst possible time.

The funnyman from Brookline with the flaming red hair, who tomorrow becomes the host of NBC's "The Tonight Show," won't only be competing for viewers with David Letterman, his one-time idol. He'll also be competing with cable TV, video on demand, shows stored on DVRs, movies downloaded to laptops, and the hipper fare of Comedy Central.

Yet in a fractured TV landscape, O'Brien is also taking over an institution that has been remarkably stable - and an audience that has stayed surprisingly large. Over the past decade, with host Jay Leno, "The Tonight Show" has maintained its audience size of about 5 million viewers, and has led its time slot - 11:35 p.m. in Boston - since the 1995-6 season, according to . Ratings for CBS's "The Late Show with David Letterman" have slipped from 7.1 million viewers in the 1993-94 season to 3.8 million today.

How much of the "Tonight Show" dominance is attributable to Leno's avuncular style or his loyal-but-aging viewers is an open question. One of the prevailing mysteries about O'Brien's upcoming tenure is how his own brand of quirky, silly, and mildly-cerebral humor, honed in the giddy environs of 12:30 a.m. on the East Coast, will fare an hour earlier - and how many of the Leno faithful will follow their own man to 10 p.m. (Of Leno's 5 million viewers, only 735,000 are 18 to 34, and some have questioned whether older viewers might want to go to bed earlier, anyway.)

Still, there's something about late-night TV itself, the way it fits into the rhythms of the American day, that makes "The Tonight Show" and its time slot still feel, if not crucial, then comfortable. And O'Brien clearly feels that he's taking the helm of something important, following the spotlights of Steve Allen, Jack Paar, Johnny Carson, and Leno.

"It's a venerated, beloved NBC franchise," he told reporters last week, describing his lush new set. "That doesn't mean I can't do silly things in that space, but the space itself should be beautiful."

O'Brien's romantic mix of reverence and irreverence may be just about right. "The Tonight Show" may not be the hippest show on TV, or even the most newsworthy, but it may well be one of the last TV institutions that matters. And its middlebrow sensibility could be the secret to its success.

The show premiered in 1954, based in New York, as a vehicle for comedian Steve Allen, who helmed a show that bears similarities to David Letterman's show today. Allen had a Lettermanesque goofiness, said Father Michael V. Tueth, the author of "Laughter in the Living Room: Television Comedy and the American Home Audience."

When Allen moved to his own prime-time show in 1957, NBC briefly experimented with a newsier format, not unlike the current "Today" show. When that failed with viewers, NBC hired comedian Jack Paar, whose TV demeanor was emotional and who loved political fare: He interviewed both Richard Nixon and John F. Kennedy during the 1960 presidential race.

In 1962, Tueth said, NBC replaced Paar with Johnny Carson, who developed the now-universal conventions of the late night talk show: the desk, the sidekick, the opening monologue (Allen often started his show sitting at a piano). It was Carson who, in 1972, moved the show to California, and he solidified his own role as a late-night companion - the wide-eyed, open-minded, open-hearted Nebraskan, guiding Americans through the gaudy and alien culture of entertainment.

For stand-up comedians, the show has long been reputed to be a career-maker; in 1982, Boston-based comedian Steven Wright - discovered by a "Tonight Show" producer who had traveled east with his kid on a college tour - catapulted onto the national scene based on his stand-up performance on Carson's show, and his stint on Carson's couch.

In more recent years, "The Tonight Show" and its late-night counterparts have evolved into proving grounds for politicians, who have used the casual venue to reach for everyman appeal, or even launch their careers: In 2003, Arnold Schwarzenegger made waves when he used the "Tonight Show" couch to announce that he was running for governor of California.

Tueth describes the mood of the late-night network shows as "playtime for grownups." And the brand of humor that works best - particularly the brand honed by Carson and Leno - has an easygoing nature, said Walter J. Podrazik, a consulting curator at the Museum of Broadcast Communications and the coauthor of "Watching TV: Six Decades of American Television."

Leno has gotten criticism, Podrazik said, for "not being zing-y enough, not being sharp-edged enough. But again, he understands his audience. He understands who's there." He points to Leno's famous 1995 interview with the scandal-ridden actor Hugh Grant, in which Leno asked, "What the hell were you thinking?"

"He could ask the questions that we're thinking," Podrazik said. "That might be a trait that would be shared with Carson."

Leno, who grew up in Andover, put his mark on the show as the consummate stand-up comedian, making the opening monologues a bigger and more important part of the show. O'Brien's is another brand of comic entirely. Before he took the helm of "Late Night" in 1993, he was a writer for "The Simpsons" and "Saturday Night Live." He says his great love is the comedy sketch.

He has been on the air long enough to have built a loyal audience of his own; "Late Night with Conan O'Brien," based in New York City, drew nearly 2 million viewers last year. And in some ways, O'Brien's persona - the fish-out-of-water, the gawky outsider in La-La land - places him firmly in the Carson tradition.

Indeed, when O'Brien talks about reaching an audience, he speaks of universal themes, and of a brand of humor that's less about politics and more about situations. Already, his staff and crew have been preparing sketches that play on his outsider status, as he explores Los Angeles beaches and the giddy world of the Universal backlot.

Whether it will draw him an audience comparable to Leno's, or place him in a pantheon with Carson, is unclear. But O'Brien said he's clinging to the advice that Carson gave him back in 1993: Just be yourself. Don't get caught up in the institution, however grand, you are inheriting.

"I think the biggest danger to me taking over 'The Tonight Show' - and I've thought this since the beginning - is overthink," O'Brien said.