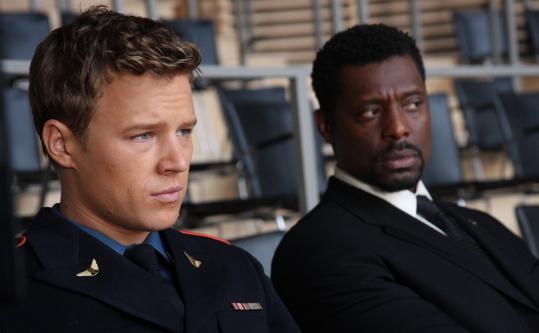 This ambitious new drama resembles little else on TV right now, and that may make it something of a prime-time albatross. Get a load of the detectable influences in the first few episodes: The Bible, Aaron Spelling, ABC's now-canceled "Dirty Sexy Money," Shakespeare's history plays, "I, Claudius," Showtime's "The Tudors," and retro-futuristic science fiction.

Did I forget to mention George W. Bush as an influence? Because "Kings," which has its two-hour premiere on Sunday at 8 on Channel 7, is also a loosey-goosey allegory of the Bush era. In the fantasy premise, Ian McShane (from "Deadwood") plays the monarch of a country called Gilboa that looks a lot like America. McShane's Silas Benjamin locks Gilboa into an unpopular war with a country called Gath. Abuses of power ensue.

Amid all the "Kings" atmospheric strangeness - which includes castle-like architecture for the royals against a slick New York City-like skyline - there is much human nature afoot. That's where the Aaron Spelling and the Shakespeare come in. King Silas is surrounded by family and staff members, all of whom he plays like chess pieces - when they're not playing him. His wife Queen Rose is a block of ice performed to the hilt by Susanna Thompson ("Once and Again"), and she is the King's formidable friend and foe. Sebastian Stan is the envious and secretive Prince Jack, a disappointment to his parents. Allison Miller is the noble Princess Michelle, and Dylan Baker is the king's ignoble and two-faced brother-in-law, the not-so-subtly named William Cross.

The hero of the series, though, is not a royal, although he may be by the end of the 13-episode season, given the show's plural title. He's a pretty-boy soldier named David Shepherd - a David who goes up against the Goliath of the Gaths and scores fame, fortune, and the affections of the princess. David is played like an amalgamation of Matt Damon, Heath Ledger, and Ryan Phillippe by Australian actor Christopher Egan, who milks every virtuous eye-twinkle for all it's worth. The curious "Kings" may not work out, but Egan, I suspect, will land on his feet in Hollywood.

McShane is the big draw here, and anyone who saw him maul the spotlight as Al Swearengen in "Deadwood" knows what I mean. He is an actor who, with a relatively still face, can mug for the camera with only his eyes. He brings on the tension, as he whispers cruel and incendiary things, like Iago, into the ears of the members of his court. At times, he makes me think of a silent-film villain. Thompson, too, stiffens her face and goes crazy with the eyes - but next to McShane, even she pales. McShane dresses in a contemporary suit and tie, but you may think you saw him wearing red velvet and a crown. The screenplay, too, gives his lines the mannered ring of ye olde royalty.

"Kings" was created by executive producer Michael Green, who has been involved with a few other unconventional series including "" and "Smallville." But this series is unusual even by those standards, and it is awesome that Green was able to get it on the air for a trial run. "Kings" does dip in and out of predictability, when familiar Spelling soap operatics and political machinations break through the show's unique surface. But it still is a fascinating effort.