'Big Bang Theory' has burst into an old-school hit comedy 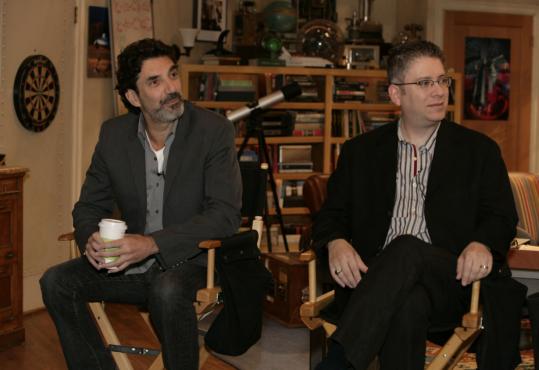 LOS ANGELES - What makes a TV show a hit or a flop is complicated. Variables include time slot, competition, how an audience likes the cast, and whether a show's style fits the national mood.

Perhaps the array of numbers, letters, and curious squiggles on a white board on the set of the CBS sitcom "The Big Bang Theory" represents that equation, because the series - about a group of geeks who work out scientific hypotheses while inadvertently solving life's conundrums - is coming up with the right answer.

On its soundstage, the "Big Bang" cast and crew are abuzz over the highly illogical feat they've managed to accomplish. In its second season, the series, which airs Mondays at 8 p.m., is gaining in both viewership and critical acclaim.

"The last original [episode] we had before Christmas went over 11 million [in viewers]," says shaggy-haired "Big Bang" co-creator Chuck Lorre, reclining on the leather sofa that serves as the centerpiece of his lead geeks' apartment. Lorre, who also created "Two and a Half Men," the even bigger hit comedy that films next door, tries to explain the viewer growth since CBS moved the show to the 8 p.m. slot and gets tripped up on percentages.

"I can't do the math, I just write about it," he quips of the ratings, which have steadily risen from an average of 8 million viewers during last year's strike-shortened season.

The list of reasons for this boost in fortunes is long. But mostly, the show has gotten funnier.

What began in the fall of 2007 as a mildly amusing but predictable story about two nerdy physicists - newcomer Jim Parsons and "Roseanne" alum Johnny Galecki - has blossomed into an often laugh-out-loud rumination on friends as family and the meaning of aspiration.

Order is important on the fastidiously decorated set, with its superhero cookie jars and faux-science journals. But on this January day, the cast watches as Parsons generates laughs by leaving his character's comfort zone in a big way: He dangles from a rope 20 feet above the set.

As Sheldon Cooper, the lanky, moon-faced actor takes the stereotype of the socially awkward scientist to the outer limits of extreme. For the scene they're shooting, Sheldon attempts to conquer his fear of making friends by climbing a rock wall. Unfortunately, this collides with his fear of heights. As Parsons's comically prone form suggests, he fails.

Sitting in a tidy dressing room that bears just a bit of un-Sheldon like mess - a pile of papers, an open laptop - Parsons, 35, admits he does share at least one trait with his alter ego: "I can talk," he says with a laugh.

He then effortlessly demonstrates by launching into a speech whose cadences resemble, but aren't identical to, his character's comic ebbs and flows. "I can really go off on a tangent and I can really get caught up," Parsons says. "It's not that I like to listen to myself talk, although I probably do - unless you hear it back on a tape recorder and then it sounds terrible.

"It's one of the most fun things about getting to play Sheldon," he adds. "It's hard because you want to get the words right and until you get the words right it's hard to play that song, as it were. But I'm so grateful for the speeches they hand down, because he's got a real way of thinking and it comes through without that filter. So we get to hear, a lot of times, the entire mental process going on."

The courtly Houston native had mostly performed onstage and in bit film and TV parts prior to landing a recurring role on "Judging Amy" in 2004. Parsons speaks with a stronger drawl than Sheldon, the beautiful mind who can explain in painstaking detail the rules of "rock-paper-scissors-lizard-Spock" but can't do something as basic as hug another human being.

But even at an easier pace Parsons tends to punch up the ends of certain words and phrases - "should," "of course," "heavens no!" - with an enthusiastic squeak that brings to mind Don Knotts.

As they've learned Parsons's rhythms, the writers have handed him more complex things to do, and the audience has responded. "We knew if there were any eyes on the show that it was going to happen, and it's totally warranted," says Galecki, who plays Leonard Hofstadter, Sheldon's considerably less geeky but still interpersonally-challenged roommate.

While his verbal skills draw praise, his physical gifts aren't too shabby, either, as today's dangle and Sheldon's painfully awkward hug of neighbor Penny (Kaley Cuoco) in the Christmas episode amply demonstrated. Parsons played his discomfort, hesitation, and the internal calculations of just where to put his arms around his costar to cringe-worthy perfection.

"That's Parsons. His instincts are uncannily correct," says Lorre. "That's what's great about television. It's historically been a medium that has allowed the audience to get to know new faces and new talents."

Aside from its creative strengths, "Big Bang" has also made a few smart moves, and gotten a few lucky breaks, on the business side of the equation.

There was the strategic decision to return following the strike, a choice many other shows did not make, to their peril as it turned out. The temporary disappearance of formidable competitor "Dancing With the Stars" certainly freed up more viewers. And the fact that "Big Bang" doesn't stream on the CBS website is also a plus as far as Lorre is concerned.

"If someone were to tell you that this was a show worth watching and there's nowhere else to see it, it makes sense that you might turn on CBS," he explains. "I mean it does limit your choices."

After wrestling with all the potential variables, Simon Helberg, who plays deluded horndog Howard Wolowitz, advances a simpler theory about the spike in the show's popularity.

"Maybe after a year of being on," says Helberg with a laugh, "people are like, 'Oh it's still on? Maybe it's worth checking out.' "