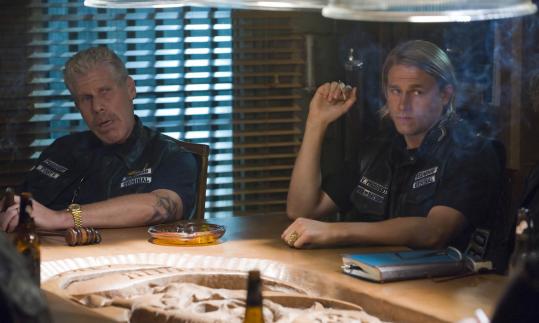 Kurt Sutter, the creator of FX's intriguing new drama "Sons of Anarchy," spent years as a writer-producer for FX's "The Shield." And it shows. About a gun-running motorcycle gang in California, the grimy, B-movie-tone "Sons of Anarchy" is similarly obsessed with brutality, amorality, and the ruthless politics of self-preservation.

But "Sons," tonight at 10, begs even more for comparison - and not necessarily negative comparison - to "The Sopranos." If you substitute "mobster" for "biker" in a description of the series, the shared blueprint is obvious: A gang of bikers, led by a family with a murderous matriarch, are at cross-purposes with the law, with other biker gangs, and, of course, with one another. The family's son, meanwhile, deals with an unlikely bout of conscience and nostalgia. The kicker: Drea de Matteo, Adriana on "The Sopranos," is in the cast.

The good news here is that "Sons of Anarchy" ultimately has its own identity, thanks to the absence of polyester suits, gold necklaces, and New Jersey accents. These thugs wear jeans and leather, they smoke lots of pot, and, while they have evolved into psychopathic outlaws, they have roots in 1960s West Coast hippie-cowboy culture. TV has invited us to sympathize with many corrupt subcultures in the post-"Sopranos" years, but I'm not sure we've ever sidled up so close to helmeted road warriors.

Also a plus: the performances. The Sons of Anarchy motorcycle club was started by Vietnam vet John Teller, who is now dead. Charlie Hunnam, at times looking uncannily like Heath Ledger, ably leads the cast as John's son, Jax, who is destined to become the gang leader. Jax is a tough guy, but he's a sensitive tough guy with a beatific smile and pretty yellow hair. And now that his junkie ex-wife (de Matteo) has given birth to his first son, he is rethinking his choices and pondering his father's original, more peaceful intentions for the gang. In episode 2, as the Sons plan a murder to cover up another crime, he boldly asks, "What if I could do this without spilling blood?" It's akin to blasphemy.

That nascent kindness in Jax is a source of great worry to his ambitious mother, Gemma, who is played with impressive iciness by Katey Sagal. Gemma is remarried to the current Sons leader, the violent Clay Morrow (Ron Perlman), and together they want the Sons to run the town of Charming by whatever means necessary. They have no scruples, and no tolerance for the ideals that Jax may have inherited from his father. Anarchists, they know, need an especially firm leader. "He's not his old man," Clay snaps at Gemma. "Stop worrying." But she will worry - and perform at least one horrifying deed - until she is sure that she owns her son's soul.

In tonight's episode, there is a warehouse explosion, and the Sons lose a cache of firearms. Those crises set a few plot strands in motion, including the growing powerlessness of a crooked cop who is in the Sons' pocket. But the show's more engaging drama involves the family dynamic between Jax, Gemma, and Clay, and the Freudian tensions that simmer beneath its surface. I can't say whether "Sons of Anarchy" will go on to fulfill its promise to be more than an violent action piece about a bunch of rebels; that's the gamble you take with any new series. But I do think it has real potential to become a solid dramatic addition to the FX slate, as "The Shield" enters its final season.