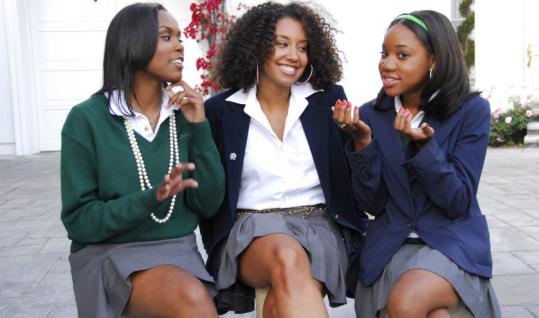 It's easy to dismiss "Baldwin Hills," the teen docu-reality show on BET, as simply "the black 'Laguna Beach'." That was the early pitch, and easy to imagine: a simple twist on a reality TV template, a chance to gawk at rich kids who happen to be African-American.

But BET's most popular series, one of the top 10 cable shows among African-Americans this summer, has turned out to be something more complex. Yes, the show gawks at the trappings of wealth, the mansions and pools in one of America's richest black enclaves. One running plotline last year concerned whether Roqui, the daughter of NBA coach Reggie Theus, would get the Mercedes she wanted as her first car. (She wound up settling for a Lincoln SUV.)

And yes, this is teen drama with the standard material: hurt feelings, silly catfights, oh-no-you-didn't moments. But what saves "Baldwin Hills" from meaninglessness is the fact that it isn't just about Baldwin Hills. The Los Angeles neighborhood blends, in geography and imagination, into what the opening credits call "the mean streets of Crenshaw and Inglewood." And the result is far more interesting than any white teen shows that served as model or inspiration.

Far more important, too; you could argue that "Baldwin Hills," which premieres new episodes on Tuesday at 10 p.m., is a more honest look at the black experience than some series that have been lionized in the past. At the very least, it's more complete. "The Cosby Show" offered a window to a world many Americans didn't know existed. "Baldwin Hills" knocks down the walls to the whole thing. And it's worth watching - for white viewers as well as black - as a study in how we live today. If Barack Obama is a symbol of both racial unity and divisiveness, "Baldwin Hills" proves that his struggles aren't unique. Even the most ambitious, successful, assimilated African-Americans must often find ways to occupy all worlds at once, to embrace or embody both Harvard Law School and Jeremiah Wright.

Indeed, it's not the wealth that makes "Baldwin Hills" so slyly fascinating; it's the way wealth coexists with poverty, both real and relative. The first season's chief villain was Garnette, a controlling diva type who aspired to be a CEO. Her equally compelling foil was Staci, a bona fide girl from the hood, who made a point of reminding Garnette about the breadth of black culture. At Garnette's fancy birthday party, Staci decided that no one was having fun, so she proceeded to give a boy a lap dance. Later, she complained to her neighborhood friends about "black white girls," griping that "I need a dictionary."

And as Garnette and her rich friends went from private school to college, Staci remained at home, wondering if she could balance community college with family drama. She was the conscience, the embodiment of doubt, the reminder that African-Americans are bound together culturally, both from the inside looking out and from the outside looking in.

That's a reality that spoiled white kids seldom have to face: No one ever expects Lauren Conrad or her friends to mingle with the residents of Orange County trailer parks. (And a show like "The Simple Life," which plunked Paris Hilton and Nicole Richie into working-class homes, was glibly condescending on both sides of the divide.)

When it comes to portraying black America, too, reality TV has tended to focus on cultural extremes. VH1's "Flavor of Love" and "I Love New York," and MTV's "From G's to Gents," are largely glorified minstrel shows, parades of gold teeth and big chains. At the other end of the spectrum, Bravo next month will debut "The Real Housewives of Atlanta," a study of five absurdly wealthy women - four of them black - in the throes of a shopping frenzy.

"Baldwin Hills," by contrast, seems determined to show rich and poor at once - a goal producers say they developed early on. Executive producer Michael McNamara says the original pilot came across as "almost a rich black version of 'Mean Girls'." But in focus-group testing, he says, audiences warmed to Staci, who was natural, expressive, and unapologetically ghetto.

Unlike the girls born lucky and rich, Staci embodies the challenges of hope. She wants to be a sports therapist or a fashion designer, but she isn't keen on losing her neighborhood ties. Nor is her best friend Sal, an aspiring rapper from the hood who now lives with his wealthy uncle in Baldwin Hills. He serves as Staci's counselor, encouraging her to go to school. But he spends ample time in the poorer parts of town, searching for material and cred.

His is a common struggle for African-American performers: How to boost your stature without losing your soul. And the most fascinating black cultural figures today, the ones who tend to draw the biggest crossover audience, find ways to occupy both worlds. Tyra Banks toes the line between street and couture. Oprah Winfrey dips into dialect when she wants to connect on a gut level with her viewers. Chris Rock doesn't stray from the specifics of black culture in his stand-up, yet finds universal themes in his CW sitcom "Everybody Hates Chris." By staying honest, he keeps himself believable to all.

Language, after all, is credibility. When Jam Donaldson, then a law student at Georgetown University, created the popular website "Hot Ghetto Mess," her goal was to wipe out embarrassing behavior within the black community. Her method of attack involved the lingo of the street.

In this second season, "Baldwin Hills" has tried even harder to plumb those intersections. When old cast members left for college, their replacements were chosen to represent a broader socioeconomic range. Even the opening credits have changed. Last season, the kids were introduced as "the sons and daughters of doctors, actors, athletes, and entrepreneurs." This season, schoolteachers, nurses, and policemen have been added to the list, and the proximity of poverty made clear.

The new additions include Seiko, whose father is a sheriff. Her love interest, Justin, is a teenage father who has served time in jail, and now preaches in a youth ministry. Staci's arc has shifted, too; she attends school, abandons the facial piercings, and aces an interview to teach at an after-school program.

Does that make "Baldwin Hills" an uplifting study of social triumph? Hell, no. This summer's central drama has been an extended girlfight over Moriah, the hapless son of former NBA all-star Marques Johnson. But even the silly teenage battles here have a social subtext, and this one is a sharp little study of intra-racial tension. Gerren runs in the rarefied world of professional modeling. Lo'Rena - well, she doesn't. Gerren shows up at parties in couture, but Lo'Rena gets the girlfriends on her side. And in a battle between two self-absorbed, manipulative teenagers, she comes across as far more sympathetic. She also seems the one who's more likely to win.

"She's got a little bit of ghettoness in her," one of the boys says of Lo'Rena in the premiere, by way of introduction. He means it, for the most part, as a compliment.