THIS STORY HAS BEEN FORMATTED FOR EASY PRINTING
critic's notebook

On TV, men are the new weaker sex 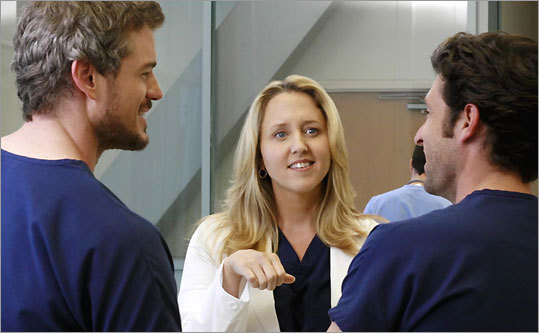 "Big Shots," ABC's mostly-comedic take on male bonding, is a man's idea of a woman's idea of men. The show's heroes - each the head of a corporation - are adorable, sensitive, flawed, and yearning for love. And they're eager to talk about it. They gab about troubled relationships on the golf course, across the pool table, in the steam room at the gym. They buy each other drinks, and sometimes cars, for consolation.

It's a lot like "Sex and the City" for men, a comparison that surely came up when the show was pitched to network executives. Except that these characters aren't wrestling with empowerment so much as they're wallowing in victimhood. They're constantly beset by the women in their lives: badgering wives, cheating wives, fickle ex-wives, insidious ex-lovers.

This is the strange state of ABC's female-friendly Thursday night lineup: It has become a night of emasculated men and emasculating women. If the classic male pinup was the strong, silent, unattainable type, tonight's TV dream man is addled and fawning. And the empowered woman - once a happy departure from older stereotypes - has become not just self-sufficient, but kind of mean.

In one sense, this is gender-bending stuff as old as Shakespeare, imagining what things might be like if men were more like women, and vice versa. But on ABC, role-reversal is pursued with such vigor that it feels like a social mission: a feverish, wholly off-putting attempt to break free of the boy-meets-girl formula.

Nowhere is that clearer than on "Grey's Anatomy," ABC's wildly-popular lead-in to "Big Shots," where the character of Derek Shepherd - once known as "McDreamy" - has completed his transition from guy-the-heroine-pines-for-in-spite-of-herself to simpering McWeenie. When he was introduced in season one - a neurosurgeon seducing medical intern Meredith Grey at a bar - Shepherd (Patrick Dempsey) was the classic TV bad boy. He was distant and commitment-phobic. He nursed a deep dark secret. He was "McDreamy" because he was a fantasy: attractive but unattainable.

Then Shepherd dated Grey, left Grey for his wife, left his wife for Grey, begged for Grey's affection, rescued Grey from a near-death experience, and wound up so pathetically attainable that he lost his appeal altogether. Lately, he's taken to staring moonily into the distance, moaning about lost love and looking as if his pet parakeet has died.

"She doesn't let me take care of her," he lamented two weeks ago to Cristina Yang, Grey's hard-charging confidante, as they watched a complicated surgery from an upstairs gallery. "It's not my job anymore. She won't let me."

On "Grey's," in short, empowerment has become a zero-sum game. And a show that once found creative ways to ogle men has evolved into a show that wants to see them punished or demeaned. Mark Sloan (Eric Dane), the womanizing plastic surgeon dubbed "McSteamy," is now in pursuit of Erica Hahn (Brooke Smith), a hard-charging heart surgeon who calls Sloan and Shepherd "Pretty and Prettier." And of late, the male character most successful in romance is George O'Malley, the nerdy intern who is going through a remedial year. One of the other characters nicknamed him "Bambi."

It's hard to entirely fault "Grey's," now in its fourth season, for experimenting with unlikely dreamboats and artificial obstacles. A show about intramural sex at a teaching hospital has to find new reasons to bring characters together and keep them apart. (In future episodes, rumor has it, Shepherd might get a new love interest. Here's hoping she'll actually be nice.)

But by setting up the Derek-Meredith romance as the show's emotional core, the "Grey's" writers have given themselves a dilemma: How to create dramatic tension - and keep up the Meredith-acts-like-a-guy conceit - while still catering to the many female fans who ascribe real emotion to the flickering screen. "I was thinking recently about why so many want to see Mer and Der together, and the truth is that it . . . is the need to believe in something," one viewer recently posted on the popular "Grey's" writers' blog. "It's hard to believe in much these days, with weapons, evil, hatred, and violence, but there is still love."

A scary thought, yes. But then, that principle of chick-lit has kept "Grey's" soaring in the ratings for all of these years. Viewers are willing to forgive a lot of mismatched love and misguided sex if there's hope - but not too much of it - that attractive characters will wind up living happily ever after.

"Big Shots" doesn't even offer that promise. That could be why the series, clearly aimed at the 19 million viewers who tune in to "Grey's" each week, only captures a fraction of its lead-in. ABC won't comment on rumors that the show, currently filming the last of its episodes written before the TV writers' strike, won't resume production when the strike is over.

But if it goes away for good, that won't be a big surprise. There's something unsatisfying about watching rich guys wallow in their powerlessness, perhaps because it puts us in the odd position of wondering who to root for: the venal women or the men they can so easily crush. Joshua Malina, who plays a pharmaceutical magnate named Karl Mixworthy, has a certain smart-girl's-dreamboat quality, honed over years of spouting snappy dialogue in Aaron Sorkin dramedies. Here, he only stammers and looks befuddled while his vampy blond ex-mistress takes over his life. What's the fun when even the intellectual challenge is gone?

That's the fallacy of zero-sum empowerment: No self-respecting female TV viewer wants to lust after a man who won't fight back. Women who watch TV for romantic escapism - who settle down for "Grey's" with a box of tissues and a glass of chardonnay - aren't looking for comeuppance or retribution. They're looking for boy meets girl. Even "Sex and the City," turned out, in the end, to be about getting the guy.