Cheech and Chong spark up a new tour 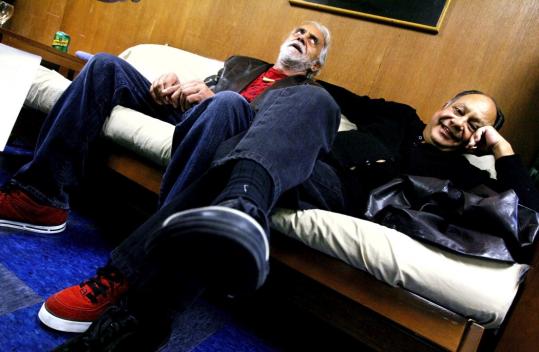 Tommy Chong (left, backstage with Cheech Marin in October) says of getting back to-gether, ''I would ... look at Cheech and know that I looked just as bad. It cracked me up.'' (Cheryl Senter for the Boston Globe)
By Nick A. Zaino III Globe Correspondent / December 7, 2008
Text size – +

HAMPTON BEACH, N.H. - It was early October when Cheech and Chong's "Light Up America" tour rolled into the Hampton Beach Casino Ballroom, but it might as well have been 1980. The room was packed for the second night in a row, a healthy line forming to buy $40 "Dave's Not Here" T-shirts, fans carrying perfectly preserved copies of Cheech and Chong albums.

Richard "Cheech" Marin and Tommy Chong haven't been on the road together in 27 years, and there have been no new movies or albums, but it was clear that their appeal hasn't waned much. (The tour, which the duo says they will continue until they get tired of it, comes to the Orpheum Dec. 11 and 12.)

Most of the audience members in Hampton Beach weren't old enough to have seen 1978's "Up in Smoke" - about two guys trying to drive a van made of marijuana from Mexico to the United States - in theaters, or to have waited in line at a record store for "Big Bambu," the 1972 album that includes the classic "Sister Mary Elephant" bit. But they've become fans nonetheless.

Tony Ciampa, a 44-year-old father of six, has been hooked since seeing "Up in Smoke" on cable. Likewise, 19-year-old Matt Johnson found the duo through their movies. But some, like 51-year-old Nick "ZZ" Misso, wearing a tie-dyed headband and "Baked Fresh Daily" T-shirt, have been fans from the beginning. "I had a smile on my face this big knowing I'm coming here," he said.

"We were middle-of-the-road dopers, and that's the norm," said Marin. "We're the norm. We kind of embodied where the country had shifted to."

Backstage before the show, Marin and Chong relaxed with tour manager Jimmy Root and Chong's wife, Shelby, a comedian opening for the duo on the tour. Chong's 70-year-old face is wrinkled, his hair and beard have gone gray; Marin, 62, has lost some hair and put on a few pounds. But the energy is still there. When the pair first got together for rehearsals over the summer at Chong's house in Los Angeles, they felt the old connection - and the years. "I would look over and look at Cheech and know that I looked just as bad," said Chong. "It cracked me up."

They challenged each other to remember their old material and sometimes wound up going back to the movies and YouTube as a reference.

So why reunite now, after so long apart? "It's the 'felimony' tour," Marin said, referring to his divorce and Chong's 2003 arrest and nine-month jail term for selling bongs and marijuana pipes. "His felony, my alimony."

Marin, who also lives in LA, has carved out a living as an actor on TV shows like "Nash Bridges" and in movies like "Planet Terror," while Chong has written two books and worked on his stand-up. Chong's new book, "Cheech & Chong: The Unauthorized Autobiography," tells his side of how the pair met in Vancouver in '68, where Marin had fled to avoid the draft and study pottery making. They first performed together in a strip club there, doing what Marin calls "hippie burlesque" with the dancers. Their act can be traced back to vaudeville comedy teams and early improv theater - two guys willing to do whatever it took to get a laugh, whether singing a song or wearing a silly costume. Fifteen years later, after many gold records and much box office success, they got sick of each other and called it quits.

Neither of them is surprised by their popularity today, but things did get a bit strange in their absence. "All of a sudden there were starting to be Cheech and Chong impersonators in Vegas," Marin said.

"Here's two right here," said Chong, and they both laughed.

After the show, Marin and Chong were greeted by a line of fans. "It was a rowdy crowd," said Marin. "They wanted to participate. It was going back to our roots, a really big beer hall."

The afternoon before the show, Root, the manager, sat in his hotel room with a pile of laundry, including Cheech's tutu and his wrinkled Margaret dress. Root, who worked with the duo back in their heyday in the mid-'70s, sees Cheech and Chong as "path-makers." "In an oddball way, the 25-year separation has actually probably been a good thing," he said. "I think that it just goes to validate how enormously talented they are, that it could survive."

Indeed, Cheech and Chong's influence can be seen in the recent popularity of stoner comedies, such as "Pineapple Express" and the "Harold & Kumar" series. But there's more to the genre of "doper movies," Marin says, than dope. " 'Napoleon Dynamite' is a doper movie," he says. "It has that doper mentality - a little hazy, a little off."

Clearly, the duo's hazy charm continues to resonate, and this tour may not be the end of the reunion. Marin mentioned a "Spamalot"-type theater project that would tell the history of how the pair became a team. Chong sees them picking up right where they left off. "The 'Up in Smoke' movie came from our live show," he said. "So what I see us doing is touring until we get tired, and then we say, 'Let's take this bit and make a movie out of it.' "