Realism gets a grip under a ghostly shadow

'The Farm' makes use of current and disturbing events 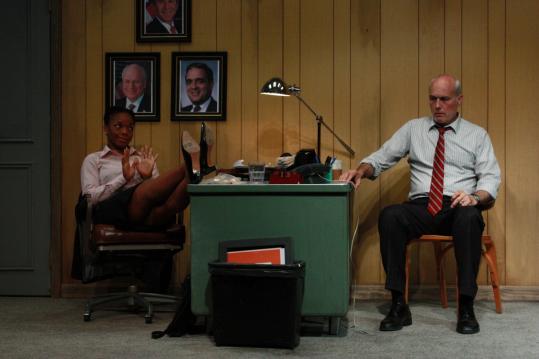 Finn is a CIA field agent, a white guy in his 50s, set to retire to a facility called The Farm after many years on the job. Parker is an analyst, a black woman in her 30s, assigned to evaluate his state of mind after a final, fatal incident in the field. Their conversation is part therapy, part interrogation, never exactly what it seems to be on the surface.

With those two characters, Walt McGough set up a crisp drama in “The Farm,’’ his one-act play debuting at Boston Playwrights’ Theatre through Oct. 23, with Dale Place as Finn and Lindsey McWorter as Parker.

But the playwright pushed it a step further with the creation of a third character, who steps in and out of the spotlight - and whom only Finn sees.

“On the one hand, it’s a traditional, two-character realistic play,’’ says director David R. Gammons, “and then it’s complicated by the presence of the third character, called The Enemy, whose presence as a ghost or a hallucination, a memory, a fantasy, a fear - I think he has many possible manifestations - it’s his presence that really got me excited.’’

The play changed even more with the casting of Nael Nacer as The Enemy. As written, the character was a traditional “white Soviet guy’’ out of the pages of early John le Carré, McGough says. Nacer’s mutable look and acting skills made the character more complex; at different times The Enemy can appear younger or older, European or Middle Eastern. Nacer “has really put his stamp on it and helped develop it in directions I never would have thought about,’’ McGough says.

“The Farm’’ goes beyond traditional Cold War spy-vs.-spy tales to comment on today’s even bleaker realpolitik. Although it doesn’t directly address issues such as waterboarding, the character Finn is definitely haunted by things he has done.

McGough says he set the play circa 2004, when the Abu Ghraib scandal broke and the world learned that US officials had authorized “enhanced interrogation techniques’’ that, to many critics, amounted to torture. He believes the United States as a country missed a chance to confront that policy: “There was a choice there to really take a look at it and overhaul it and figure out where we went wrong - and I don’t think we really made that choice. We all felt really outraged and then we looked away.’’

McGough, 27, a native of Pittsburgh, came here in 2009 for the graduate playwriting program at Boston University.

“I was on winter break preparing for second semester, and I had in my mind I was going to write this big, epic, magical play about America, the great American play or whatever, and I couldn’t get past page eight or so,’’ he says ruefully.

He was stressing out, worried that he wouldn’t have anything to work on going forward, when a professor e-mailed an assignment for the first class after break: Write the first 10 pages of the play you’ve been putting off writing.

McGough had been mulling an idea since hearing about a CIA facility in Virginia called The Farm. It was widely assumed to be a training venue, but he had read one account speculating that it was also used as a sort of decompression chamber for spies coming out of the field.

“I realized this was the play I had been putting off writing. So I put down the big American epic that was just going nowhere and wrote out these first 10 pages and brought it into class, and . . . I realized that was the play I wanted to be writing,’’ McGough says. “It sort of blindsided me.’’

Only a fraction of the students in the MFA program get a play fully produced at the theater, she says. “Walt is the real thing,’’ Snodgrass says. “I knew immediately this was a play that had legs.’’

Gammons has one Elliot Norton Award and several nominations as a director, as well as a reputation for edgy stagings such as last season’s “Hotel Nepenthe.’’ He took to “The Farm’’ immediately and said he would like to be on board if it was produced.

McGough lives in Brookline and still has a day job, as an administrative assistant at SpeakEasy Stage Company. But the playwriting side of his resume is growing. His “Priscilla Dreams the Answer’’ won the audience award for best comedy at Washington D.C.’s Capital Fringe Festival, and will be the debut production of Boston’s new Fresh Ink Theatre Company in December.

His other works are humorous and often fantastical. “The Farm’’ is a departure, but not as much of one as he thought, McGough says. Working with Gammons and the cast, “We’ve been discovering that it’s a little simpler than the other stuff I’ve written, it’s a little less crazy and out-there, but it’s definitely not realism.’’

THE FARM Play by Walt McGough