Expansion, contraction, and the space in between 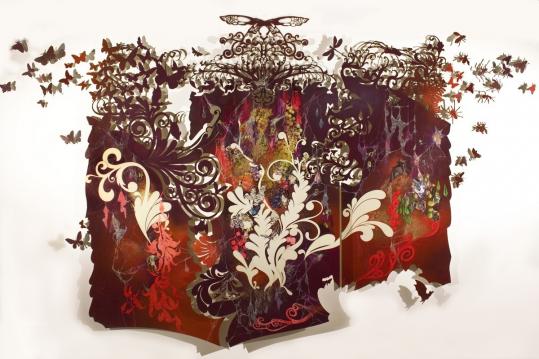 Resa Blatman’s exuberant paintings, full of flash, dazzle, and baroque flourishes, have over the years become increasingly architectural. You can lose yourself in the illusions she creates with paintings.

They’re also complex structures cut out of panels, and the shape of the painting itself becomes part of the story. “Ultimate Whorl,’’ her exhibit at Ellen Miller Gallery, offers some of Blatman’s most technically virtuosic work yet.

“The Golden Mean,’’ the show’s most ambitious piece, overflows its three panels and even the wall it’s mounted on. As always, this artist’s topic is life’s expansion and contraction. The painting has at its center a spider on a web that crosses plump clusters of grapes showered with gold glitter. Deer, bats, and a variety of insects also appear.

Blatman weaves layers of different types of representation, from realist painting to flat graphic filigrees to ornate cutout designs that cast shadows. The center panel of “The Golden Mean’’ juts out at a greater relief from the wall than the other two, heightening the drama. Some insects, such as the spider, are painted with the precision of a master of Dutch still lifes. Others - for instance, a flurry of moths liberated from one edge and flying around the corner - are merely cutouts, their wings the same purples and reds as the seething background of the painting.

The viewer’s eye bandies about, from depth to surface to shadow to off the very edge of the painting. The variety of technique complements the subject matter - life as teeming and lush, almost beyond comprehension. This is true even in Blatman’s smaller works such as “Ripening,’’ which wheels around another cluster of grapes. The fruit droops over a wandering white vine - not realist, but graphically flat - that a bird perches upon. Nearby, another flat, white filigree erupts from the cap of a realist mushroom, and the effect is comically sexual. All of this occurs within the busy ornamentation of the cut edges, which swoop and blossom and unfurl. It’s hard to imagine that Blatman could push her work even further than this, but I hope she does.

The format reminded me of Mexican retablos, folk art paintings depicting saints. The project also conjures lingams, representations of male energy found in Hindu temples. It has that clarity of purpose, cutting through a heap of societal fetishes in order to celebrate masculinity’s joyful, life-giving essence. Hooray for that!

In “La Petite Mort (blue apotropaic magic),’’ the male genitalia are electric blue, with the tiny happy faces blinking throughout. The ejaculate is a small fireworks display. Anchoring the piece is a vividly blue eye, in which tiny skulls float - the Greek or Turkish evil eye, worn to ward off evil.

The happy faces show up in grids in “La Petite Mort (cosmogonic drips),’’ and that same visage appears as the head of a slender, Marcel Marceau type fellow who embraces a naked lady in another series, “Love.’’ She’s clearly having a good time, but he curiously comes across as sexless. With all this powerful masculine energy throughout the exhibit, where is our hero’s?

Reese Inman, who handcrafts paintings based on algorithms she designs, has a new show at Gallery NAGA. The paintings have evolved over the years, but essentially follow the same format, with dots over a hazy ground. In “Migration II,’’ for instance, the dots grow sparser and smaller along the edges, winking over a background that shifts from punchy olive green to deep brown. They have a murky loveliness, like lights seen through a mist.

But Inman also has something new to offer, digital videos, and they are captivating. In the series “Times Square Garden,’’ she uses color-coding to insert images of flowers into footage of Times Square. We still sense the movement and outlines of urban bustle, but it comes across in tiny squares of daisies and roses swelling and rushing over the screen.

Nelson DaCosta’s brawny, turbo-charged paintings, also at NAGA, continue to feature graphic, almost iconic faces carved out of a network of black lines - like a ropy spider web - against a shifting ground of prismatic color.

DaCosta is from Angola, and violence, grief, and love of family has always lurked in his bold abstractions. In some works, he collages in magazine clips. “In the Beauty’’ shows two willowy young white women and several black women in profile, some with African adornment. DaCosta puzzles over two standards of beauty, and expresses the immigrant’s clash of cultures, but that clash doesn’t feel fully realized in these works; it’s jarring. Art is about integrating polarities, not merely illustrating them.

ALEXIA STAMATIOU: The Call to Adventure!