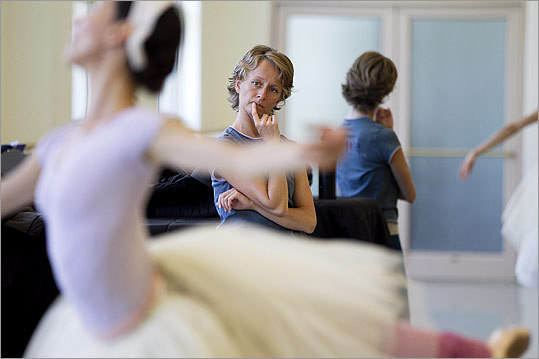 "The more you turn the leg out, the more the hip will be in the correct place."

Larissa Ponomarenko is in Boston Ballet’s light-filled Grand Studio, instructing new Boston Ballet II dancer Olivia Lipnick on how to keep her balance while pirouetting. It sounds basic, but for Ponomarenko, technical precision is the road to artistic excellence.

Over the past 18 years, as a Boston Ballet principal dancer, Ponomarenko defined artistic excellence, whether it was with her obsessed Utamaro beauty of a Cio-Cio San in Stanton Welch’s “Madame Butterfly,’’ her peerless seagull imitation in Nacho Duato’s “Jardí Tancat,’’ or her simple stance in perfect fourth position as Nikiya in the first act of “La Bayadère.’’

Now, as a new company ballet master at 40, Ponomarenko has given up performing for teaching. At a rehearsal for this season’s production of “Les Sylphides,’’ she’s the embodiment of Chopin’s music, wafting along the sidelines, making weeping willows of her arms, or checking herself in the mirror to see what she looks like - which is what the dancers should look like.

Fashionably attired in overlapping lemon and lavender tops, black sweatpants with red Adidas stripes, and sage-green socks, she stands with her hands behind her back, leans forward with her hands on her knees, or kneels to get a different perspective. There’s the pensive look, the half smile, the sly smile, the big smile.

At one point, Ponomarenko talks to rehearsal pianist Alex Foaksman about tempos. “Pianists also are artists, and they have their own vision of how things should be played, but the physicality of the movement sometimes doesn’t coincide with the tempos,’’ she explains later.

She demonstrates her way of doing a sequence to former Paris Opera Ballet principal Florence Clerc, who’s coaching Boston Ballet in “Les Sylphides.’’ She runs to the center of the studio to fill out a trio. She flies across the room to embrace former Boston Ballet School instructor Tatiana Legat.

Her day is a mad rush, from teaching (or taking) the morning company class - if she can fit it in - to blocks of rehearsals interspersed with meetings to schedule still more rehearsals. “Sometimes I have no chance to even have a bite of food at lunch time,’’ she says. Her new role as ballet master may also include overseeing photo shoots, acting as a representative of the company, and speaking at special engagements and events.

But she’s not conflicted about her decision to retire, which the company announced in May, after a career of performing in more than 100 Boston Ballet productions - hundreds of performances ranging from “La Sylphides,’’ “Giselle,’’ “Coppélia,’’ and Don Quixote’’ to modern works by George Balanchine, Mark Morris, Christopher Wheeldon, and Jirí Kylián.

“Every chapter in life or in nature ends at some point. Will I miss it? Of course,’’ she says. “There are parts I will not miss. Of course, dancing onstage, nothing can compare to that.’’

What if her choreographer husband, former Boston Ballet principal dancer Viktor Plotnikov, created something for her? Would she dance then? “Oh, absolutely.’’

It began in Ukraine Together, Ponomarenko and Plotnikov have traced an improbable career path. Ponomarenko was born in Odessa, Ukraine. “It’s a beautiful city, a real gem,’’ she says. She didn’t start ballet classes until she was 9, but a year later, she was off to St. Petersburg to train at the Vaganova Ballet Academy.

“I lived there for eight years; I would come home for two months in the summer,’’ she says. She met Plotnikov in St. Petersburg, and the two returned to Ukraine to dance with Donetsk Ballet.

Then in 1990, they came to Jackson, Miss., for the USA International Ballet Competition. “Viktor,’’ Ponomarenko recalls, “really wanted to stay in the United States,’’ so they accepted an offer from Ballet Mississippi in Jackson. After two years they moved on to Tulsa Ballet, and a year later they were in Boston.

Company principal Yury Yanowsky, who also arrived in the fall of 1993, has a vivid memory of Ponomarenko’s debut, as Aurora in “Sleeping Beauty,’’ when she slipped and fell before she’d taken five steps onstage.

Ponomarenko can’t explain it. “I don’t remember if I slipped, or if there was a Ghost of the Wang Center, or . . . but it just happens, you know, and there I was. Somebody mentioned that it was my christening by the stage.’’

That might have been the last time she was off balance on the Wang stage. She was the opening-night Odette/Odile in “Swan Lake,’’ and then the opening-night Tatiana in John Cranko’s “Onegin,’’ which concluded her first year with the company. (“Oh my God, she was divine,’’ is company artistic director Mikko Nissinen’s comment about the Tatiana she danced in 2002. “I don’t know if I ever saw better.’’)

By the following season, she had become one of Boston Ballet’s biggest stars. Her Giselle’s mad scene was Lady Macbeth-like in its intensity. Her Kate in Cranko’s “The Taming of the Shrew’’ was a holy terror; when she smacked one of her hapless suitors, you could hear it in the back row of the Wang balcony.

Modern dance was another matter. “They were not casting me for contemporary pieces, because they were afraid I was not capable, or at that time there was a common understanding that Russians didn’t like to do contemporary pieces,’’ she says. “But I did want that, so I had to go and ask them to let me learn on the side.’’

She learned quickly: By March 1995 she was doing the “Rum and Coca-Cola’’ number in Paul Taylor’s “Company B,’’ joining the Bomb Squad in Twyla Tharp’s “In the Upper Room,’’ and dancing a steamy Apache with Paul Thrussell in Tharp’s “Waterbaby Bagatelles.’’ And then there was her Lucille Ball-like turn in Daniel Pelzig’s “The Princess and the Pea’’ as she hitched up her skirt and tried to scale the nine mattresses.

Had she been watching “I Love Lucy’’ reruns? “No, but then when I read the reviews, and people were comparing me to her, I did. It’s acting - I love acting.’’ She had played a role in the 1983 Ukrainian film “The Star-Child’’ at 12, riding a horse and brandishing a pistol.

Nissinen says Ponomarenko became “a fantastic contemporary dancer.’’ Indeed, by 2007 she had become Boston Ballet resident choreographer Jorma Elo’s muse, starring as a little girl playing with her toys in “Brake the Eyes,’’ the Chosen One turned heroine in “Le Sacre du Printemps,’’ and the focal point of “Elo Experience.’’

Company principal dancer Kathleen Breen Combes wasn’t surprised. “It’s because her technique is so clean. Jorma can use that and then distort it and make it a little bit creepy,’’ she says. “If you watch what she does in [Elo’s work], it’s very classical. It’s super-hard, technically. You watch her and she’s standing on one leg and it’s so turned out, and it’s contemporary because he’s added something to it, but you couldn’t do it if you didn’t have that technique.’’

It also helped that both Elo and Ponomarenko are adept at tapping their inner child.

“People perceive me as a serious person,’’ she says, “but I think I’m very foolish and crazy, actually. That’s why I love the stage, too, because it allows me to be somebody I can’t always be in real life.’’

What’s next? As to her real life after dancing, she says that once she had decided to retire, she didn’t assume she would be offered a job with Boston Ballet. “I never have expectations, so I was prepared mentally to leave Boston.’’ She didn’t know whether her Russian training would be needed. “There are companies and dancers that don’t have that training, and they bloom and they prosper in their field.’’

Nissinen, however, doesn’t think Boston Ballet is one of those companies. “I am really looking for that strong academic classical training in the studio, the strength of the Russian school of the back and arms, with different speeds in petit allegro,’’ he says. “I’m also looking forward to having her coach the principal ladies. The whole company loves her and has looked up to her; they really listen to her.’’

Breen Combes certainly does. “You felt honored to be in the ‘Swan Lake’ corps when she was dancing,’’ she says. “I just think she has so much information in her, and I’m happy that she’s going to pass it along, that we’re not losing her.’’

These days, Ponomarenko has more than dance on her mind.

“I love nature, whether it’s walking in the woods or going swimming in the ocean. I love video editing. I’d love to learn crafts like quilts and mosaics. I love gardening. I have a disassembled bench, I would like to paint the pieces of wood and put it back together for my garden. There are so many things I would love to explore, I don’t think I’ll ever find time for all of them.’’

And looking back? “All my life, I’m learning to be present all the time and enjoy every single moment. I had to learn to do that onstage, because at the beginning of my career, I would just go on, perform, and come off, and I don’t remember what happened, because the nerves get the best of you. So I really had to learn to enjoy every moment.’’