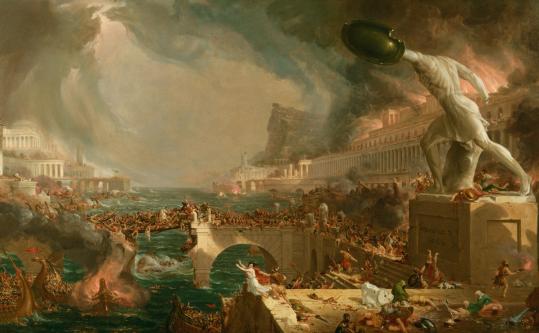 Thomas Cole’s “The Course of Empire: Destruction,’’ part of his five-painting series that opens the “Painting the American Vision’’ show at Peabody Essex Museum.
By Cate McQuaid Globe Correspondent / August 26, 2011

SALEM - The Hudson River School artists had a particular and romantic agenda: to transmit the sublime experience of nature they found in the American landscape. For 19th-century artists such as Thomas Cole, Asher B. Durand, and Albert Bierstadt, the wilderness represented something pure and holy, a majesty that could not be found during a grand European tour, a must for American artists of the day.

“Painting the American Vision’’ is a traveling exhibit put together by the New-York Historical Society, now on display at the Peabody Essex Museum. It features a host of treasures from the historical society’s collection, which rarely travel (the society is renovating its galleries, so some of its masterpieces have gone on the road). This is the only New England staging of the show.

The exhibit begins and ends with showstoppers that do more than capture that 19th-century fervor for nature. They give today’s viewers pause to consider where we have come as a society since the Hudson River School painters dreamed their glorious dreams.

Cole’s magnificent five-painting series “The Course of Empire’’ fills the first gallery. Collector Luman Reed commissioned the artist to paint the series in 1833, and over the next three years Cole developed a vast, intricate narrative framed by the landscape, notably a rugged cliff face in the distance, which remains throughout the rise and fall of Cole’s empire.

The New York staging of the exhibit presented the series clustered in a salon style, but PEM’s in-house curator Sam Scott hangs them more cinematically, side by side around the gallery, the better to give viewers a sense of time passing as the sun rises and sets over this mythical empire.

It proceeds from “The Course of Empire: The Savage State,’’ in which men in animal furs hunt for their food in a woodsy wilderness beneath a roiling sky, to the more placid “The Course of Empire: The Arcadian or Pastoral State,’’ which represents the moment in American history in which Cole painted it. The scene is mostly rural, with a shepherd tending sheep, and youths engaged in music-making and dancing.

There are 45 works in “Painting the American Vision,’’ and, in some galleries, there is too much wall space for them. Many are small jewels. The Hudson River School painters were committed to realist detail, and went into the woods and along the riverbank to paint studies en plein air, which they would take back to the studio to use in both documentary-style landscapes and imagined composites. Thomas Hiram Hotchkiss’s “Catskill Mountains, Shandaken, N.Y.’’ is an exquisite example of an intimate work, filled with nature’s motion and patterns, that clearly demanded on-site observation - hair-thin reeds bow down over a water hollow; mauve flowers puff on the left, and an ivy-wrapped tree rises behind.

Durand, Hotchkiss’s mentor, was a great advocate of detailed observation, which you can see in his “Shandaken Range, Kingston, New York,’’ a tree study executed at least partly outdoors. The rugged texture of the bark begs to be touched, as foreground trees frame a backdrop of woods and pasture, and a sky suffused with light-filled haze.

The Hudson River School was hardly unique in its approach. Its common motif of the framing tree is a nod to the 17th-century painter Claude Lorrain, who also deployed reflective water to guide the eye through his landscapes. Durand’s evocative “The Solitary Oak,’’ with its cattle and its luminosity, clearly borrowed from 17th-century Dutch landscapes. In it, the noble old tree is backlit by a spectacle of a sunset, which mirrors off water in the distance as cows and sheep linger peacefully in the twilight.

These artists grew to be masters of light and distance, a visual cocktail intended to evoke serenity and awe. The scope of the paintings, from the precisely rendered foregrounds to the distant mountains shrouded in clouds, suggested more than a painter’s technical investigation of space - it spoke to the breadth and possibility of the American wilderness. John Frederick Kensett’s “White Mountain Scenery’’ is an imagined New England scene. In the near ground, a tiny herdsman steers his sheep and cattle over a bridge beneath a slender, arcing tree that joins the warm, pale sky to the woodlands - these notes anchor us in colorful, minute detail. Far beyond, the shadowy mountains top the horizon.

Even Martin Johnson Heade’s nearly scientific close-up “Study of an Orchid,’’ depicting a voluptuous lavender bloom hosting a couple of hummingbirds, features a far mountain, a smoldering sky, and an overarching branch to orient us.

Most of the works in “Painting the American Vision’’ delight. A couple miss the mark jarringly. Jervis McEntee’s “Autumn, Mill Stream’’ is a muddle of brush strokes, and the low perspective has us digging out, aching for a vista. The foreground of Louis Rémy Mignot’s “The Harvest Moon’’ is a nimbly painted field of yellowing cornstalks, and the sky is gorgeously iridescent, but the moon itself, poking up across the horizon, looks like a prop in an elementary school play.

These are quibbles. “Painting the American Vision’’ revisits a time of passionate faith in the possibilities of America, as embodied in the natural landscape. There’s no irony and no lament here, both hallmarks of 20th- and 21st-century American art - only canvases awash in a rapturous encounter with the land.

Just as “The Course of Empire’’ sets the stage for more than an exhibit of lovely landscapes, the exhibit’s final work, Bierstadt’s grand “Donner Lake From the Summit’’ offers an unsettling coda. A sumptuous landscape, with the turquoise lake cradled in mountains beneath a lemony sky, this painting was commissioned by railroad magnate Collis P. Huntington to commemorate the Central Pacific Railroad’s highest geographic point, which required blasting nine tunnels through solid granite.

A shiny train laces across the mountain’s edge on the right of the painting. Bierstadt painted it in 1873, 27 years after the Donner party was trapped at the pass. Viewers at the time wouldn’t have missed the juxtaposition of the railroad’s forward progress with the earlier plight of pioneers.

From a more jaded 21st-century vantage point, though, the railroad represents the beginning of the end of the American idyll portrayed by the Hudson River School painters, a point at which the wilderness tipped from being more of a spiritual resource to a commercial one. And the terrible story of the Donner party becomes an allegory of an America consuming itself to death.