Love and loss, right from the Hart, in ‘Ten Cents’ 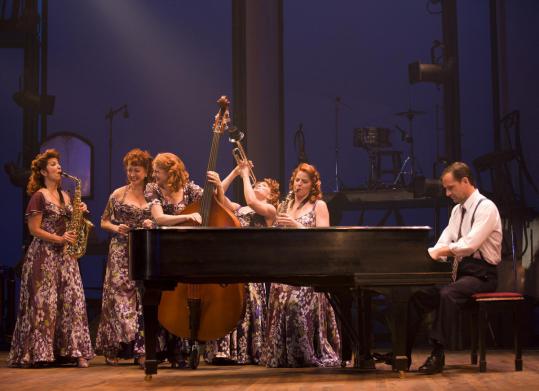 WILLIAMSTOWN - Perhaps it’s odd, even heretical, to think of another songwriter’s words when you’re listening to the songs of Rodgers and Hart.

But throughout John Doyle’s lovely, elegiac “Ten Cents a Dance,’’ now at Williamstown Theatre Festival, a line from Bruce Springsteen’s “Mary’s Place’’ kept running through my head: “Tell me how do you live broken-hearted?’’

An approximation of that question underlies many of the lyrics written by that tormented genius Lorenz Hart before he died in 1943 at age 48. So it’s fitting that the ache of loss, loneliness, and regret suffuses the new musical revue Doyle has constructed from Hart’s words and the melodies of Richard Rodgers.

“Ten Cents a Dance’’ chases the elusive shadows of memory to tell - through songs and images and gestures rather than traditional narrative - the story of a love affair between a singer named Johnny and a chorus girl named Miss Jones. (The names were inspired by Rodgers and Hart’s “Have You Met Miss Jones?’’ and “Poor Johnny One Note,’’ both of which are performed in “Ten Cents). Johnny is portrayed by Malcolm Gets, while Miss Jones is played by five actresses who represent Miss Jones at different stages of her life: Lauren Molina, Jane Pfitsch, Jessica Tyler Wright, Diana DiMarzio, and Donna McKechnie. As with Doyle’s Broadway productions of Stephen Sondheim’s “Sweeney Todd’’ (in 2005) and “Company’’ (in 2006), the performers play musical instruments in “Ten Cents a Dance.’’

“Ten Cents’’ is not for everyone. Some may find Doyle’s creation mystifying and overly abstract. It contains only the briefest snippet of dialogue and only the faintest of characterization. What it has in abundance, apart from three dozen hard-to-beat songs that are generally well-performed by the cast, is mood and atmosphere, much of it supplied by Jane Cox’s crepuscular lighting and Scott Pask’s hauntingly evocative set. That set is dominated by a black spiral staircase, down which Johnny walks at the beginning of “Ten Cents.’’ When he reaches the bottom, he just sits there, lost in thought.

He gets up and walks slowly to a piano, pauses for a long moment, then sits down. But he’s facing away from the keyboard, turning his back on the music and the past that music will summon. Finally, he turns around and, with seeming reluctance, begins to play a few notes, and then he starts to softly sing “Blue Moon’’: “You saw me standing alone/ Without a dream in my heart. . .’’ When Johnny reaches the line “And then there suddenly appeared before me. . .’’, the five actresses begin to descend the staircase, attired in matching gowns. Over the next 75 minutes or so, as Johnny and the various Miss Joneses trace the shifting currents of romance, Doyle finds ways to suggest beginnings and endings, innocence and disillusionment, the blooming of romance and the souring of romance, in a single song.

During a performance of “There’s a Small Hotel,’’ for example, Miss Jones 1 (Molina), the youngest, is aglow with the happiness of a love affair just begun, while Miss Jones 3 (Wright) and Miss Jones 4 (DiMarzio) wear bitter expressions. The evocation of a small hotel clearly brings less happy memories for them; perhaps of a betrayal by Johnny during that period of time?

“My Funny Valentine’’ starts out as an affirmation of love’s right to choose quirky individuality (“Your looks are laughable/ Unphotographable’’) over common standards of beauty. Then Wright, looking distraught, turns the line “Stay, little valentine, stay’’ into a desperate plea, while Miss Jones 5 (McKechnie) looks wistful, suggesting she was unable to persuade her valentine to stay after all.

The middle portion of “Ten Cents a Dance’’ captures the cosmopolitan, larky side of Rodgers and Hart. In “Bewitched, Bothered, and Bewildered,’’ Johnny is surrounded by all five Miss Joneses, who lean on the piano, looking flummoxed, as they alternately celebrate and lament the power of sex. During their rendition of “The Lady Is a Tramp,’’ DiMarzio stands out with her brassy, to-hell-with-convention gusto.

The mood turns reflective and melancholy in the latter part of “Ten Cents a Dance,’’ with poignant performances of the heart-piercing title song, “I Didn’t Know What Time It Was,’’ and “He Was Too Good to Me,’’ which Johnny reprises shortly thereafter while substituting “she’’ for “he.’’ By the time Johnny reprises “Blue Moon,’’ it registers as a final prayer of thanks.