Her parents' legacy, her own spotlight 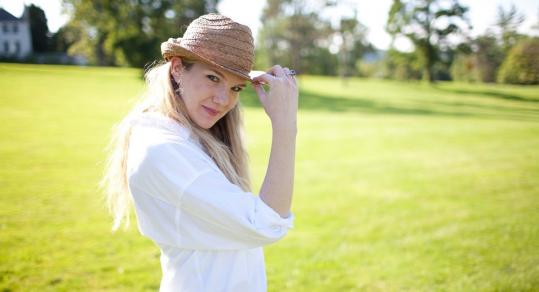 WILLIAMSTOWN - Lily Rabe says what she remembers most about making her professional stage debut in 2002 at Gloucester Stage Company, alongside her beloved, twice-Oscar-nominated mother, Jill Clayburgh, are the “endless hysterical giggle fits’’ that would erupt during rehearsals.

Mind you, the twin one-act plays they were rehearsing - Israel Horovitz’s “Speaking Well of the Dead’’ and Frank Pugliese’s “The Crazy Girl’’ - were no rip-snorting comedies. But the gales of laughter, and the tears that sometimes flowed from those laugh riots, illustrated Rabe and Clayburgh’s camaraderie and the tight-knit bond they shared.

At the time, Clayburgh was tentatively returning to the stage after many years away, and Rabe had only just finished her sophomore year at Northwestern. But with her mother’s guiding influence, Rabe made an auspicious debut, signaling the arrival of a bright talent to watch. Fast-forward nine years, and Rabe is now a true Broadway star, with a 2011 Tony Award nomination to her name for her sparkling portrayal of Portia in “The Merchant of Venice.’’

“I’m so grateful that we did those plays together. It’s sort of scary to work with your parents when you’re in the same business. But there was something so very safe about that. Acting with her was just like working with a wonderful actress who just happens to be my best friend and also my mother,’’ Rabe says during a recent interview near the Williamstown Theatre Festival, where she’s tackling another iconic role, Nora in Ibsen’s “A Doll’s House,’’ beginning Wednesday. “This is the first play I’ll do that she won’t see, so that’s something I’m going to have to face.’’

In November, Clayburgh, best known for her Oscar-nominated roles in “An Unmarried Woman’’ and “Starting Over,’’ passed away at the age of 66 after a 21-year battle with chronic leukemia. At the time, Rabe was tackling “Merchant’’ in the Broadway production starring Al Pacino. As Clayburgh’s health deteriorated, Rabe would shuttle back and forth from her mother’s bedside to the theater each day during previews, and opening night was shifted back so Rabe could be with her mother in her final hours.

One 24-hour span in May underlined the professional triumph and personal devastation Rabe endured simultaneously. On May 2, her family - including her father, the Tony Award-winning playwright David Rabe, and her brothers - held a memorial service for Clayburgh. The following morning, Rabe awoke to news of her Tony nomination and a voice mailbox full of congratulatory messages.

“There are no words to describe the kind of polarization that I went through - you know, having such a wonderful experience alongside the worst, most painful experience of my life,’’ Rabe says. “I think I’ll be trying and failing to articulate this year for the rest of my life.’’

Immersing herself in playing Portia, she says, saved her. “My mom died on Friday, and I went back to the show on Saturday, and I don’t know what I would have done otherwise to cope. Because once I couldn’t be with her, it was like, ‘Get me on that stage.’ And she would have done the same thing,’’ Rabe says. “She was the great love of my life, and the theater is one of the great loves of my life.’’

An ethereal beauty, Rabe is perched on a bench outside a coffee shop on bustling Spring Street in this tranquil corner of the Berkshires, the blistering summer sun shining down on her porcelain skin, her eyes hidden by motorcycle-style Ray-Bans. Rabe is effervescent in person, with an expressive face and an infectious, thrilling laugh. As she speaks, she pauses often to search for the right words, and her voice quavers at times as she talks about her loss.

At only 29, she’s already ticked off several boxes on what she calls her list of “fantasy gals’’ of the stage. Top on that list was Portia, to which she brought witty, whip-smart intelligence and a dawning ruefulness. Right behind was Ibsen’s Nora, the young “doll-child’’ wife with a coquettish charm, a dismissive and condescending husband, and a secret to which she’s desperately clinging.

Director Sam Gold says he’s approaching “A Doll’s House’’ by trying to strip away the play’s social, political, and historical baggage (about women’s rights and its famous “door-slam-heard-’round-the-world’’) and instead focus on the emotional story at its center, the breakup of a young marriage.

“I didn’t quite realize just how immediate this play is. There’s nothing stale or dusty about it. We’ve all been sort of doubled over thinking about all of the various breakups that everyone in the room has had,’’ Rabe says, with a big laugh. “I think if you’ve had any kind of failed relationship, there’s no way that this play doesn’t strike one, if not many, many chords.’’

Rabe says Nora has an enchanting quality of “beaming’’ on the people in her orbit, and she thought of women she’s known in her own life with a similar quality. “When Nora’s shining her light on you, nothing else really exists, and it’s intoxicating,’’ she says. “But also I think it’s very tricky to move through the world in that way, because then everything is about what’s going on around you, and none of it is ever about who you are in the situation.’’

Contradicting some past interpretations of the character, Rabe says Nora’s no rube. “She’s quicksilver and witty and incisive,’’ Rabe says. “I’ve never seen her as some kind of flighty girl who has no idea what’s happening to her and is just flailing around. She’s an operator!’’

By the end of the play, Nora comes to a devastating realization. “She doesn’t know herself. She’s moving through the world based on the men in her life,’’ Rabe says. “She’s never been alone with herself, and she’s terrified of that.’’

Gold believes there are few actresses of Rabe’s generation that could convincingly bring to life Nora’s story arc onstage. “She has grace and strength and depth beyond her years, and enormous and surprising power as an actress, yet she can be light as a feather,’’ he says. “I can see her as the woman of grand gestures and the doll child at the beginning of the play, yet knowing she has the ability to make this transformation.’’

The festival’s artistic director Jenny Gersten, who helped produce “Merchant’’ during its initial Public Theater run in Central Park, praises Rabe’s unique ability to navigate between fierce self-possession and vulnerability with seeming ease. “I thought her Portia had so much moxie and sensitivity, which are really difficult qualities to balance,’’ she says.

With layered performances on and off Broadway over the past six years, in plays as diverse as “Steel Magnolias,’’ “Heartbreak House,’’ and “The American Plan,’’ as well as a budding film and TV career, Rabe hopes she’s established her own reputation apart from her showbiz lineage. “I am my parents’ daughter, and I always want to be. But I first wanted to make sure that I was standing on my own two feet,’’ she says. “You want to feel like people are hiring you because they want to work with you, not because of who your parents are.’’

Still, she’s long wanted to perform in one of her father’s plays, and now she’s about to get her wish. She says she’ll star in the world premiere of David Rabe’s “An Early History of Fire’’ this coming season in New York. “It’s scary, but we’re really excited to work on it,’’ she says. “Last year, my mom and I started talking about doing another play together. So I learned the hard way not to put things off because you’re terrified of them. If I feel like I’m going to be sick thinking about a part, then that’s probably something I should investigate doing.’’

Recently, Rabe and her father were leafing through old photo albums at their house in Lakeville, Conn., and came across images of Clayburgh as a young apprentice at Williamstown in 1963 and programs from several shows in which she performed that season. Rabe herself debuted at the festival in 2007 in “Crimes of the Heart,’’ but she insists the shared connection doesn’t amplify the meaning of her experience.

“Everything I do is more meaningful because of her and our relationship and who she was as an actress and a person,’’ she says. “I carry her with me every step I take.’’