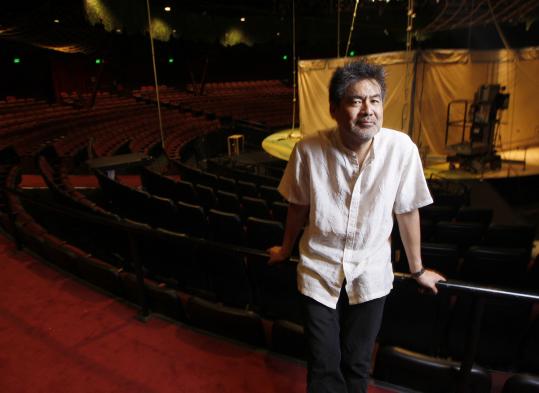 BEVERLY - Johnny Weissmuller did not swing across the screens of David Henry Hwang’s childhood, yelling his Tarzan yell.

Weissmuller, the former Olympic swimmer who played ape man to Maureen O’Sullivan’s Jane, was immortalized as the title character in the Tarzan movies of the 1930s and ’40s. The famous old films found new generations of young viewers through TV, but Hwang, growing up in 1960s Los Angeles, was not among them. Their depiction of Africans put him off.

“There’s something kind of creepy and racist about it. I think I just sort of intuitively felt that as a kid,’’ said the Tony Award-winning dramatist, who has explored issues of race, culture, and heritage in plays from “M. Butterfly’’ and “Golden Child’’ to “Yellow Face’’ and “Chinglish.’’ “So I really wasn’t that attracted to the Tarzan stories.’’

As a parent, though, he found himself watching and enjoying Disney’s animated movie, “Tarzan,’’ after it was released in 1999. A few years later, he wrote the book for the musical, which opened on Broadway in 2006 with music and lyrics by Phil Collins.

Last week, the 53-year-old Hwang came to spend several days at North Shore Music Theatre, tweaking his latest draft for a new version of the show that begins performances there on Tuesday.

“The show only ran on Broadway for a year, which, for a megamusical, is not considered that successful,’’ he said. “I mean, because of the expense of the original production, we never sort of took it out of town. We never actually tried it out. We had to open cold on Broadway.’’

The creators have continued to revise it since then, he said, and it’s enjoyed long runs in Holland and Germany. The current rewrite is aimed at making the show financially feasible for regional, stock, and amateur companies, as well as high schools.

North Shore Music Theatre has a history with Disney as a place for scaling back Broadway shows into versions licensed to high schools. “Aida,’’ whose book is co-written by Hwang, was reworked there in 2005.

“Tarzan’’ is being retooled for a smaller cast and reorchestrated for fewer musicians. It reconceives much of the action that happened in the air on Broadway, where actors flew in harnesses, to work on the ground.

“It’s a wonderful story, and it’s a story that has not been told successfully on the stage,’’ director Bill Castellino said, alluding to the Broadway production. “I saw it, and I enjoyed it very much, but it did not really reach the audience, and it didn’t run the way they wanted it to, and I think that they think there are reasons for that. And I think it’s an enormous credit to the producing organization to go, ‘Wait a minute. Let’s have another look at this.’ ’’

Castellino, who was tapped for the project by North Shore Music Theatre artistic director Arianna Knapp, a fellow Boston University graduate, worries about filling the venue’s 1,500 seats. That’s partly because “Tarzan’’ is “a little boy’s story,’’ he said, rather than a show targeted at girls, like “Beauty and the Beast’’ or “Wicked.’’ But it’s also because the musical wasn’t a hit, and the movie on which it’s based is more than a decade old.

“It’s not that tried-and-true Broadway show that’s been given a stamp of approval in New York,’’ he said. “It’s mostly on nobody’s radar.’’

For Hwang, however, part of the job of adapter is to keep in mind the aspects of “Tarzan’’ that are on people’s radar: not only the basic story of the white child raised in the African jungle, but also the Disney movie, which is familiar to many of the children and adults who see the stage version. For them, he said, the show must “at least deliver the moments that people are thinking they’re going to see and hoping to see.’’

“They certainly want to hear the songs from the movie,’’ he added. “So the question becomes, how do you place those in a way that’s emotionally satisfying?’’

Hwang won the Tony Award for best play with his 1988 Broadway debut, “M. Butterfly,’’ which fuses elements of the opera “Madame Butterfly’’ with a true story about a French diplomat and his male Chinese lover. He remains best known as a playwright.

But he has long crossed artistic boundaries, writing opera librettos for composers including Philip Glass and Unsuk Chin and creating a new book for Rodgers and Hammerstein’s “Flower Drum Song.’’ He’s penned screenplays, too, notably for David Cronenberg’s 1993 film adaptation of “M. Butterfly.’’

“With each form, I feel there’s somebody who holds the primary creative vision, and everybody else supports that,’’ Hwang said.

With a play, he explained, that person is the playwright; with an opera, it’s the composer; with a movie, it’s generally the director.

“And, you know, with a musical, it’s complicated because you often have to do a mind meld with your collaborators, which in the case of doing a Disney musical certainly includes a producer,’’ he said. “I think you need to know the rules of the particular form you’re going into and feel comfortable with that, or else you shouldn’t do it.’’

Musical book writing, he said, is “a very self-effacing kind of craft,’’ demanding the willingness to “hand the big moments over to someone else’’ - to set up the songs and then step back. Hwang, a self-described “craft geek,’’ is attracted to that challenge, and also to some of the themes running through “Tarzan.’’

“The assignment here is to try to get ‘Tarzan’ the movie onstage,’’ he said. “But what I bring to it, the thing that makes it resonate for me, is the connection with these issues of heritage.’’

That, he said, is what “Tarzan’’ has in common with his other work.

“In a way it’s a story about assimilation and culture clash. There are certainly ways in which you could look at this as an immigrant’s story,’’ said Hwang, who has written about the experience of being the child of immigrants in autobiographical plays including “F.O.B.,’’ which stands for “fresh off the boat.’’

Tarzan, a human adopted into ape culture, attempts “to out-ape the apes until he meets other humans and he realizes, ‘Oh, wait, I’m actually from someplace else,’ and then has to kind of deal with that conflict,’’ Hwang said. “So, you know, just in terms of various kinds of identity issues that I’ve written about, it’s not inconsistent.’’

It’s congruent, too, with his preference for adapting - a practice that, he said, extends even to many of his straight plays, which often take inspiration from other plays even if their substance is dissimilar. In that sense, his new Broadway-bound drama, “Chinglish,’’ which is one-third in Mandarin, “is sort of a riff on ‘Glengarry Glen Ross.’ ’’

“I like having a structure to bounce off of,’’ he said. “And, not to be too grandiose about it, but it is also true that almost all - possibly with the exception of one - of the Shakespeare plays are adaptations. There are only so many stories out there.’’

How to tell them, of course, is the question, though box-office success cannot be predicted with any certainty. Hwang learned that much with “M. Butterfly.’’ Trying out in Washington, D.C., before its Broadway premiere, it failed to win the seemingly crucial approval of critics at The Washington Post and Variety.

But the play, which Hwang said will probably get a major revival in the next few years, went on to a long run in New York. It made his career.

“The history of any entertainment medium is littered with projects that were surefire hits that did not become hits, and things that seemed like long shots that did become hits,’’ Hwang said. “So you don’t know.’’