Artist Cy Twombly, who scrawled wildly on canvas, dies at 83 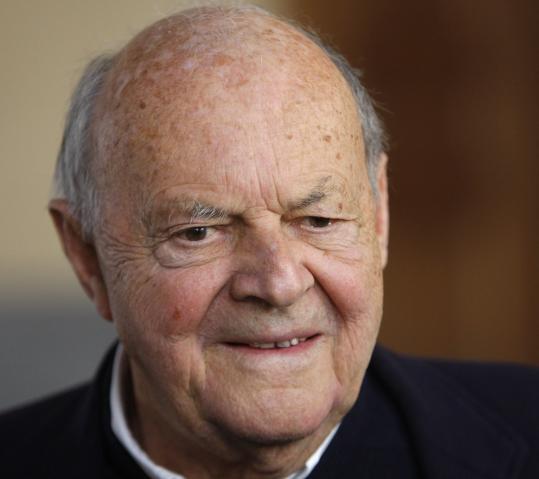 Cy Twombly, one of the 20th century’s great lyrical artists, died yesterday in Rome. The cause was not immediately disclosed, but he had suffered from cancer. He was 83.

He was the odd man out in a triumvirate of three friends from the American South - including Jasper Johns and Robert Rauschenberg - who built great reputations in the art world.

Unlike Johns and Rauschenberg, bridging figures between Abstract Expressionism and the Pop Art and Minimalism of the 1960s, Mr. Twombly achieved great fame only in his later years.

He was a voracious reader whose works are filled with casual allusions and quotations, many indecipherable. The marks he left on his canvases at times resemble scrawled marginalia in textbooks or poems, at other times the graffiti he saw in Rome.

Mr. Twombly was born in Lexington, Va., but lived a peripatetic life. He studied briefly in Boston at the School of the Museum of Fine Arts and holidayed frequently as a child on the Massachusetts coast. Although he was based for most of his adult life in Rome, he spent a large portion of his final years back in Lexington.

According to photographer Sally Mann, a friend in Lexington, there was “a negligent grace, a whiff of mischief, and a charming insouciance’’ about him.

His affluent Southern upbringing affected his sensibility. In recent lectures at Harvard, Mann said: “Cy and I share similarities in our childhood experiences. We were both reared by black women, whom we adored beyond all telling,’’ and his delivered “some kick-ass lessons in proper manners.’’

Mr. Twombly went to high school in Rome, Ga., before coming to Boston to study. He spent 1950-51 on a scholarship at the Art Students League of New York. There, he met Rauschenberg, who encouraged him to apply to Black Mountain College in North Carolina.

One of his teachers at Black Mountain, painter Robert Motherwell, remembered Mr. Twombly as a “natural.’’ He had a “native temperamental affinity with the abandon, the brutality, and the irrational in avant-garde painting at the moment,’’ he wrote in 1951 in a note accompanying his first solo exhibition at The Seven Stairs Gallery in Chicago.

With a scholarship from the Virginia Museum of Fine Arts, he traveled, before serving briefly in the Army as a cryptologist.

He then set up as an artist in New York, sharing a studio in the early 1950s with Rauschenberg.

From the time of his move to Rome, Mr. Twombly’s work can be seen as an attempt “to fuse antiquity’s epic spirit with the slang, raw data, and fragmented time of modern experience,’’ in the words of the late Kirk Varnedoe.

Mr. Twombly was eventually rewarded with retrospectives (Varnedoe organized a 1994 exhibition at the Museum of Modern Art in New York), handsome monographs, and a following that teetered on the edge of a cult. (Model Elle Macpherson named her son Cy after him.) His paintings fetched prices unrivaled by most other living artists. He was awarded a Golden Lion in 2001 at the Venice Biennale.

Some of these influences were European: the wandering lines of Paul Klee, the “automatic writing’’ of the Surrealists, the affected naiveté of Jean Dubuffet, and what Dubuffet called “art brut’’ (art by the untrained, the mentally ill, and so on).

Closer to home, he was inspired by the vigorous, seemingly unconscious mark-making of abstract expressionists like Jackson Pollock and Willem de Kooning.

But in some ways Mr. Twombly’s idiom was a reaction against those artists’ more muscular styles: It was focused, instead, on twitchy scribbles, hesitations, erasures, and an exquisitely perverse sense of composition.

Nearer the end of his career, Mr. Twombly became ever more interested in the art of the old masters - especially those working in the landscape tradition, from Poussin through Monet - and his work was often openly in dialog with those artists.

When the National Gallery in London invited him to hang his work next to a work from its permanent collection in an exhibition called Encounters, he chose J.M.W. Turner’s 1839 seascape “The Fighting Temeraire.’’ He later made a series of works that pay homage to Turner’s canvas.

One week ago, the Dulwich Picture Gallery on the outskirts of London opened an exhibition pairing Mr. Twombly with Poussin. (“I would have liked to have been Poussin, if I’d had a choice, in another time,’’ he has been quoted as saying.)

Mr. Twombly almost never spoke about his work on the record. The work itself - despite its fragments of legible text - seems similarly disinterested in communicating any message, and blithely indifferent to accusations directed at it in the “my child could do that’’ category. Instead, it amounts to a silent, ecstatic monologue, one that draws its force from tensions between Mr. Twombly’s literary allusions and a raw immediacy found nowhere else in art.

Funeral arrangements are incomplete. In 1959, he married Luisa Tatiana Franchetti, and they had a son, Alessandro Cyrus, who is a painter.