Middle school’s a stage, with some challenging roles 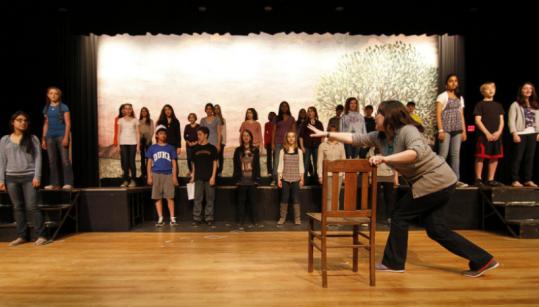 Esme Sammons, drama director at Sharon Middle School, works with actors in “The Halls.’’ (Photos By Robert E. Klein for The Boston Globe)
By Jennette Barnes Globe Correspondent / May 12, 2011

SHARON — Reality can be hard, especially in middle school. You’re old enough to understand adult situations, but pretty powerless to change them, and everything about the way you interact with peers is in flux. You can’t drive, or vote, or show your face in school tomorrow after some humiliating thing that happened today.

“We often have a joke among the teachers who work here,’’ said Esme Sammons, Sharon Middle School’s drama director, “that middle school would be a great setting for a reality show.’’

And so she embarked on writing one. It sounds like quite an undertaking, but for Sammons the task was par for the course. This is her fifth year of writing a completely original play for her students at the school, where all seventh- and eighth-graders take theater.

She said she began writing her own plays because she felt it was hard to find meaningful, appropriate material for middle school. Unless you’re talking musicals — and at Sharon Middle School, they do enough thea ter that musicals are someone else’s domain — many plays seem too childish or too adult for this age group.

Although the school has grown accustomed to Sammons’ writing plays, this year’s drama, “The Halls,’’ is different, not just because it’s styled like a reality show, with videotaped talk-to-the-camera confessionals between scenes, but also because the students wrote parts of the show. Sammons created the arc of the story, and with her guidance, they contributed some of their own ideas and monologues.

“Middle school is not a picnic,’’ said seventh-grader Dhruv Singh, who decided to audition because he enjoyed drama class. “Middle-schoolers actually have really tough things they go through.’’

In the play, Singh plays Conor, a joker and good friend of Serendipity Chamberlain, played by eighth-grader Julia Getz. Nick, another character and friend of Serendipity, gets romantic lines from her to try with the new girl in school, Christine, who has attracted the attention of a number of boys. Nick doesn’t see that Serendipity, his close friend, is the one who loves him.

It’s a tough position all around.

“I try to make moves on girls a lot, and my plans are really stupid,’’ Tollefson said.

The show touches on themes like cliques and stereotypes as well. Getz said it explores different perspectives on pretty, popular girls — not just how others see them, but also how they see themselves.

“Some of the ‘mean girls’ say you have to dumb yourself down to look like that and be popular,’’ said Getz. “What if this is true? What if some girls really feel this way?’’

Ashvi Patel plays Christine, the new girl from Maine. The guys think she’s so pretty, she said, but they don’t know anything about her. One of the lessons of the play is “to not like someone for stupid reasons,’’ she said.

The message is nuanced. On one hand, the students want adults to respect them and take their problems seriously, but on the other hand, they learn from the play to remember that the problems of middle school will pass.

Sammons sees shades of “Cyrano de Bergerac’’ and “A Tale of Two Cities’’ in the show, and the students have read parts of those works to deepen their understanding of the parallels about self-sacrifice and interpersonal relationships. But what energizes her most about the play are the students’ contributions and how those contributions give them a voice. Every actor has a monologue, some written by students.

“It’s taking something I’ve always seen as a figurative voice and gives them a concrete voice,’’ Sammons said. The project became her master’s thesis, which she finished in December. Some of her professors from Lesley University plan to see the show.

As for the themes, Sammons said the show offers “a little snapshot of the good, the bad, and the ugly — the things that matter.’’

“The Halls’’ runs today and tomorrow at 7 p.m. and Sunday at 2 p.m. in the newly renovated Sharon Middle School theater. Tickets are $7 in advance, $10 for reserved seating, or $10 at the door. For information or advance tickets, contact Laura Salomons at lsalomons@verizon.net or 781-784-3755.

Jennette Barnes can be reached at jennettebarnes@yahoo.com.