A mighty role in downtown Worcester 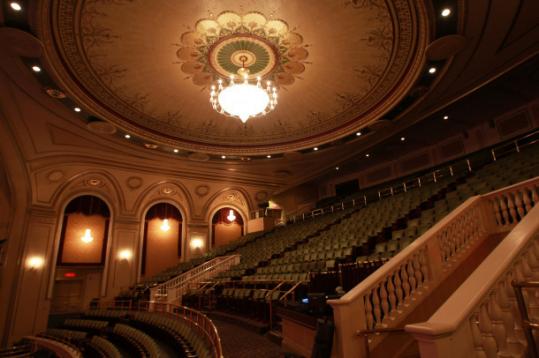 WORCESTER — Stand on one side of tiny, wedge-shaped Federal Square, on the southern edge of this city’s downtown, and the perspective is gleaming. What once was a boarded-up multiplex is now the glassy facade of the restored Hanover Theatre for the Performing Arts, a venue for touring Broadway shows that draws audiences from all over fast-growing Worcester County.

Stand on another side of the square, and the pawnshop that doubles as a check-cashing emporium is difficult to miss, while empty storefronts are easy to see. Then again, the dive bar is gone now, replaced by an establishment that serves craft beers. Apartments a few doors down from the theater are being rehabbed. A couple of small restaurants have popped up.

“I don’t want to oversell it,’’ Mayor Joseph C. O’Brien said recently, contemplating the theater’s impact since its opening in March 2008 — though, of course, salesmanship is as much a part of the job for him as it is for any mayor. “Has it changed the world? No. But has it made a big difference to that part of town? Absolutely.’’

On the inside, the 2,300-seat Hanover Theatre is all gilding and mirrors, moldings and chandeliers, the product of an award-winning $31 million renovation aimed at restoring its 1920s design by Thomas W. Lamb, the architect of the Boston Opera House. The theater, a nonprofit now in its third season, has hit its stride offering a mix of drama, dance, comedy, music, and family shows that keeps it lit 140 nights a year. The theater puts its total attendance at 174,716 for last season, when it had a budget of $5.6 million and finished more than $23,000 in the black.

The numbers have climbed each year since the Hanover opened its doors, building an audience from scratch. Its current e-mail marketing list of 65,000 people, Hanover executive director Troy Siebels said, began as a list of 5,000 names: some from the local chamber of commerce, others from personal e-mail lists supplied by board members. Ticket sales so far this season, which ends June 30, have topped $5 million, surpassing the 2009-10 season total of $4.8 million.

“I think part of it is that Worcester was an underserved market,’’ Siebels said. He believes his venue has been finding new audiences, not merely attracting those who otherwise might have traveled 40 miles east to catch some theater.

“I think there were a lot of people who didn’t drive to Boston to see a Broadway show,’’ he said.

O’Brien views the theater as emblematic of a community with a rich history, one that has suffered some difficult times and had to remake itself in order to survive. Worcester is home to 10 colleges and universities, a biotech corridor, and art and science museums, he said, but its downtown, like the centers of a lot of midsize cities across the country, has struggled to reinvent itself since its heyday.

“The life and death and rebirth of the theater is very symbolic of what’s happened to our city,’’ O’Brien said. “The story of the Hanover is the story of Worcester.’’

At the Hanover, those shows will play a house whose renovation won a National Preservation Honor Award last fall from the National Trust for Historic Preservation. One of the other 2010 winners was the Art Deco restoration of the Empire State Building’s lobby.

Much of the Hanover’s original design had been lost when the building became a movie theater in the late 1960s, and some elements — like the mural that used to decorate the curved expanse above the proscenium, and the plaster swans that ornamented the boxes in the auditorium — have yet to be replaced. The money, Siebels said, did not stretch quite that far.

The elegance of the theater is at odds with the neighborhood, whose poverty made the public-private partnership behind the project eligible for $8 million in federal tax credits. It also got a combined $8.6 million in historic preservation tax credits, aimed at community revitalization, from the federal and state governments.

The US Census Bureau’s estimates for 2005-2009 underscore Worcester’s difficulties; about a quarter of its children live below the poverty line, compared with 12.8 percent statewide.

“We’re poorer than we were a decade ago,’’ O’Brien said by phone, noting that two-thirds of children in Worcester’s public schools qualify for free and reduced-price lunch.

A couple of blocks from the theater is the Worcester Community Action Council, a nonprofit antipoverty agency. Its executive director, Jill C. Dagilis, said the Hanover’s presence has stirred activity in the area, contributing to the creation of “a healthy community.’’

Worcester is bigger, too, than it was a decade ago. With a population of 181,045, it leapfrogged right over Providence in the 2010 Census to become the second-largest city in New England, behind Boston.

“People are always shocked to hear that,’’ O’Brien said. “We can be our own worst enemy here in Worcester. We haven’t done a very good job of telling the story.’’

Meanwhile, the theater has become not only “a great cultural magnet, drawing people from all over Central Massachusetts,’’ but also a catalyst, O’Brien said, for “a whole lot of conversations’’ about what’s possible in the city and its downtown.

Siebels, who was the producing director at the Stoneham Theatre before going to the Hanover full time in 2006, was not sure at first that he would find his work there as gratifying as he had found regional theater.

But he does find it rewarding — and that has a lot to do with the changes he sees around the theater: new businesses, cleaner streets, fewer homeless people, more signs of life.

“Worcester isn’t Boston,’’ Siebels said. “It’s a city where you can make a real impact.’’