A dapper dancer turns 100 with a twirl around the floor 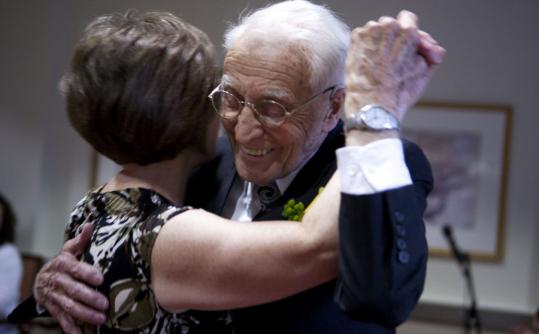 Floyd Crellin wows the crowd as he waltzes with physical therapist Mary Keohane during his 100th birthday party at Goddard House in Brookline. (Kayana Szymczak for The Boston Globe)
By Karen Campbell Globe Correspondent / May 1, 2011

Floyd Crellin celebrated his 100th birthday by taking an impressive spin around the dance floor, gently leading his partner through the steps and spins of a lyrical waltz. He’s been dancing nearly all his life, and would be the first to tell you it has helped to keep him going strong all these years.

While Hillary Merritt and Matt Shimizu from Avalon Ballroom Dance were the professional entertainment, it was Crellin’s dancing that elicited the most delight, first in an impromptu spin with Merritt, then performing a rehearsed routine with his physical therapist, Mary Keohane.

Keohane has used dance as a way to engage Crellin as part of rehabilitation following a broken hip three years ago.

“She taught me to walk, and I taught her to dance,’’ the dapper Crellin told the crowd.

It is dancing that Crellin credits in part with keeping him not only physically healthy for 100 years, but young at heart. “I love dancing and the people you meet,’’ he said.

Crellin began dancing at the age of 7. After his father died in the 1918 influenza epidemic, his mother began attending social dances at their church in Rochester, N.Y., taking Floyd and his brother and sister along.

“My father started dancing and he never quite stopped,’’ said Crellin’s son, David, a retired educator.

Crellin’s mother didn’t have the means to offer her son formal dance instruction, and he never finished high school, but went straight to work, starting out sweeping floors at in Rochester. But with his natural curiosity, motivation and work ethic, he became an instrument specialist and assistant engineer.

“My father, coming from very modest circumstances, is one of the hardest working, most responsible people I’ve ever known,’’ David Crellin said.

“And he’s a true gentleman, meticulous about his appearance and concerned about decorum, that people do things the right way, treat each other with respect.’’

Crellin and his late wife, Elizabeth, danced informally while raising David and his brother, and then began taking formal dance classes. “We were always trying to learn new steps,’’ he recalled.

Eventually, while working full time for Eastman Kodak, Crellin started his own dancing school in the basement of a friend’s baby furniture store. He charged $3 per couple for an hour dance lesson, and Elizabeth baked a cake for the dancers every night.

“He and my mother were very, very good dancers, routinely dancing five times a week,’’ David said. “For years, they were members of two ballroom dance clubs.’’

After a dance exhibition at a department party, Floyd and his wife were asked to teach ballroom dance at Kodak, where co-workers called him “Twinkle Toes’’ because of his proclivity to dance in the elevators.

When he eventually retired to a community in Florida, he taught dance classes there as well.

He moved to Brookline two years ago to be near his son, and though he doesn’t teach any more, he still loves to dance. He has an exercise machine and works out half an hour every day, and participates in Goddard House’s extensive movement and fitness program.

“On an emotional level, it helps people feel more joyful and confident, and allows them to explore such issues as frustration and loss that may be too difficult to explore verbally,’’ said Shapiro.

The transformative power of dance could be seen during Crellin’s party with other Goddard residents as well. As the Avalon performers took turns dancing with some of the residents, years seemed to drop away.

When Crellin broke his hip, doctors feared he would have to use a walker for the rest of his life.

“But when he came here, he was determined to walk on his own and his desire to dance inspired him,’’ his son said.

Keohane found that using dance was an especially effective therapy to increase balance and endurance as well as alleviate depression. And she got free lessons from a master in the bargain.

Shapiro called Crellin “incredibly fit and agile,’’ and Goddard House movement therapist Danielle O’Brien said that it is not just the exercise, but dancing that keeps Crellin so vigorous for his age.

“You can only get so much from riding the bike and lifting weights. Dance is different. It’s not just physical, but has a social, emotional, and spiritual connection as well,’’ O’Brien said. “Those people for whom dance has been a significant part of life have a whole component of wellness that ties all those things together.

“That really shows in Floyd’s well-being, his cognitive, spiritual and emotional health. He’s so excited to be turning 100.’’

Shapiro added: “He’s ready for life every second of every day.’’