Inside technique, attempts at expression 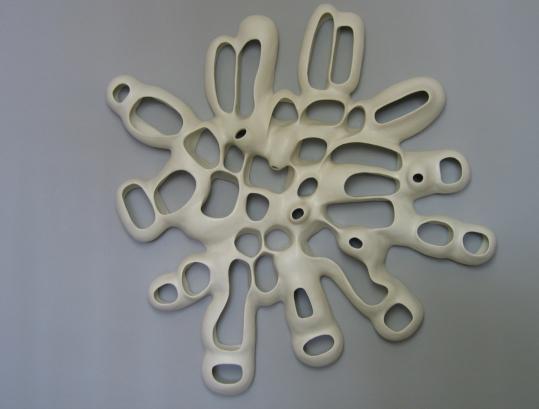 Certain artists are technique geeks. The final product matters, but their main focus is not on image, narrative, or meaning. What they are passionately curious about is how a particular material will react to a specific process. It’s chemistry lab for aesthetes. Two shows up now on Harrison Avenue, porcelain sculptures by Joan Lurie and glass sculptures by Kazuo Kadonaga, belong in this category.

Lurie works with porcelain, which can be brittle. To make it more elastic, she adds paper pulp to her clay. You can’t see it; in fact, it burns off in the initial firing, but it leaves air holes in the clay that add to its strength. To create her wall sculptures, Lurie uses ropes of clay to draw loopy webs.

This is not your grandmother’s porcelain. Lurie’s forms are bold and biomorphic, puckish, and sly. The works are delicate, but not because they are whisper thin. Rather, they are holey, built around great recessed gaps, with smaller holes opening at the ends of nodules pointing this way and that. They are rather like coral. In “Wallform1,’’ the protrusions poke out like critters finding their way, nose first, to the surface of earth or water. The backdrop of larger holes is delightfully chaotic.

Lurie’s freestanding sculptures comprise two bowl forms, one turned atop the other. Like the wall pieces, they are built out of networks of clay. “G1’’ has an airy bottom half, with strong, tensile lines. The top sports bulbous passages with impertinent openings that, like those in “Wallform1,’’ sprout out among generous, if unpredictable, recesses. The forms of these freestanding works can ghoulishly suggest busts of leprous heads, but the porcelain forgives all hints at ugliness with its soft white luster.

Kadonaga has the final exhibit up at Walker Contemporary, which closes at the end of the month, and even now hours are unpredictable — you can see his show by luck or by appointment. Although these are glass sculptures, Kadonaga is not a glass artist in the way that, say, Dale Chihuly is. Kadonaga is a process artist who sometimes works with glass. His work is much humbler than Chihuly’s spectacles.

These sculptures are all experiments in how molten glass behaves. For several pieces, the artist attached a bicycle crank to the tube through which a ball of molten glass travels. The crank keeps the ball of glass somewhat spherical, and Kadonaga dropped one hot dollop upon another until he had a mass of them, as in “Glass No 6F,’’ which looks like an accident at the bonbon factory, only it’s clear glass. Light dances off its seams.

“Glass No. 7H’’ is greenish yellow, made at a marble factory, so the dollops of glass are smaller. For this piece, Kadonaga had a tube spit the molten marbles into a bucket. Some retained their form, but as the accumulating marbles in the bucket held their heat, others melted into rivulets along one side. It’s a picture of the melting process, and it also looks like a crazy mess of glittering gemstones. Kadonaga didn’t plan it that way. For him, the gorgeous sculpture is a happy byproduct of his fascination with process.

Sophia Ainslie matches flat passages of color against coursing gestures in India ink in her drawings at Kingston Gallery. These pieces have imperative and agency: They slither and pool, they cut against the white background. Ainslie’s artist statement is reserved — she lets on that the work was put together from sources such as an X-ray, maps of Johannesburg, and photos and sketches inspired by her walks in New England. You can see the landscape in her abstractions: The flat passages read like land masses on a map, and the ink drawings portray a more direct and emotional involvement with the landscape, recalling bark, roots, grass, and water.

But art historian Karen Kurczynski, in the show’s catalog essay, provides more background. The color elements are abstractions of fragments of an X-ray of the artist’s mother’s abdomen, taken while she was dying of cancer. The colors Ainslie chooses — browns, blues, oranges, greens — are her own associations to places, such as her native South Africa and Ireland.

So these become maps of loss and the connections that remain, landscapes of grief, which cross time and space. In appropriating the X-ray, Ainslie turns a record of her mother’s decline into something in her own language, something she can master and perhaps better comprehend.

Should a viewer need to know an artwork’s backstory in order to grasp its power? No. A drawing or a painting should stand on its own. I read the catalog essay after I saw the show, so I can say that Ainslie’s works do. “Fragment-J’’ features streams of inky gestures rushing from the central form down and to the right. That flat-toned center is a winglike structure of reddish browns surrounding a flat, shield-like element in orange and blue. The whole looks almost figural, like a posturing samurai. The brash color swatches and the fluid ink marks play push-pull games with the viewer. The largest works here are 5-by-6-feet. I would like to see something even more sprawling, even more like a landscape.