Artist's wood sculptures have always gone with the grain 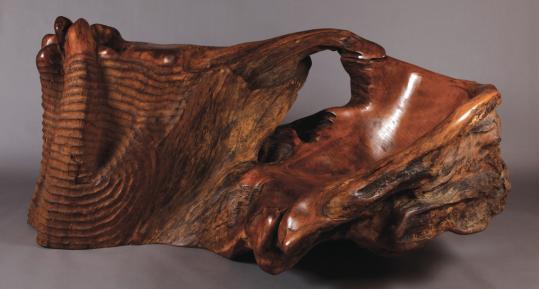 Jon Brooks created his “Throne’’ sculpture, with its seat on the right, in 1970. (Bill Truslow)
By Cate McQuaid Globe Correspondent / April 3, 2011

MANCHESTER, N.H. — Even the bulkiest of Jon Brooks furniture pieces dance. The first retrospective of one of the leading lights of the studio furniture movement of the last 40 years, “Jon Brooks: A Collaboration With Nature’’ is at the Currier Museum of Art through June 12.

Look at “Throne,’’ which the woodworker made in 1970, the year he turned 26. Five-and-a-half feet across with the seat scooped out of one end, polished, deep, and inviting a loll, and the other end carved in undulant ripples, its top pillowed with small hills. It rushes and dips like water.

From the beginning of his career, Brooks kept his eye on the lines inherent in the wood he worked. The fluidity of the wood grain, the arch and stretch of a trunk, and the curving gnarls of roots all provide the blueprints for his work. Those gestures, while growing in stolid trees wed to the earth, fly and shimmy.

Brooks grew up in Manchester and lives on conservancy land in New Boston, N.H. He has built a house with a sloping roof resembling a magical forest-dwelling in a fairy tale, as well as a studio, and he wanders through the woods to harvest the material for his art.

“A Collaboration With Nature’’ follows the trajectory of Brooks’s career, from his student days at the Rochester Institute of Technology. “Homage to Brancusi’’ (1966) is a leaner version of the great Modernist sculptor’s stone “The Kiss.’’ A symmetrical totem, it depicts two abstracted figures embracing, merging into a single form. It’s the most belabored piece here, as if the artist was imposing his will on the wood, rather than letting his material show him the way.

When he does that, he finds majesty. He crafted “Pacik Chair’’ in 1977 out of a walnut tree root. Its broad seat sweeps up and out like splashing water. As Brooks carves, he extends the gestures he finds in the wood and cuts out anything that slows the sense of motion.

In the mid-1980s, Brooks spent a year in residence at the Tasmanian School of Art, University of Tasmania, in Hobart, Australia. The native scrub woods and the color he found in aboriginal art there cracked his imagination open. The line he’d sought in the wood grain he now discovered in narrow, twisty branches. His forms became leaner and more fanciful.

“Styx Ladder-back Chairs’’ (1985) are deliciously awkward, with eight-foot-tall slender, knobby ladder-backs that reach hopefully toward the heavens. Brooks has incised and painted little hieroglyphic squiggles in the surface, activating it with cartoony gesture.

These chairs have no seats. They pay tribute to classic Shaker and colonial designs, but they’re hardly functional. Brooks, like many of his studio furniture compatriots, steps spryly back and forth between form and function; just when you think you know you’re looking at a chair, you see it’s impossible to sit in — and suddenly it’s a comic, existential sculpture.

Ladders became one of Brooks’s go-to forms; he also leans on spirals, and, as his work has evolved, human and animal figures. The electric “Georgia and Alfred,’’ made in 1991 of wild pear and bass wood, is a pair of spindly-legged black dogs covered with polka dots, portraits of dogs named for Georgia O’Keeffe and Alfred Stieglitz.

Brooks began to employ seamless joinery to create figures, as in “True Loves Blue,’’ a blue-stained curly maple settee from 2000, held up by figures on each end with snaky arms and legs, vibrating with Brooks’s colorful hieroglyphic incisions. They are portraits of Brooks and his wife, Jami Boyle.

He applies another tool from his furniture-maker skill-set to the fantastical “Citron Altar’’ (2009), a high table with nine legs fashioned from maple saplings that bow and curl as they drop to the ground. Any table maker would have the devil of the time leveling a nine-legged piece, let alone one with legs that dance like noodles.

In January 2010, Brooks’s studio burned down. He lost his collection of wood, his tools, and more than 25 works of art. Colleagues from around the world pitched in to reconstitute his equipment, and in May another studio was up and running, but the fire that destroyed the woodworker’s workspace has made its mark.

“Morning After the Fire’’ (2010) returns to the heft of the artist’s earliest works. In it, a 14-foot twisted coil of brawny saplings, scorched and slashed over with colorless gestures, rests precariously on a pale pine sphere the size of a medicine ball. The sphere is cracked in the middle, as if from bearing the burden.

His post-conflagration pieces reveal a welcome dark side to a generally upbeat artist. Even the occasional social commentary sculptures, such as 2002’s “Portage,’’ a response to the terrorist attacks of Sept. 11, 2001, in which two figures carry a boat as a plane hits them, are so lithe and fluid, so dancing, that the gravity of their subject matter is nearly forgotten.

But Brooks hasn’t, apparently, sunk into a funk. The most recent piece in the show is titled “Mouvinon,’’ and it’s a twisty, twirly-legged work, a chair with a golden seat. Another throne, but this one looks so fleet it might run away with you.

Cate McQuaid can be reached at catemcquaid@gmail.com