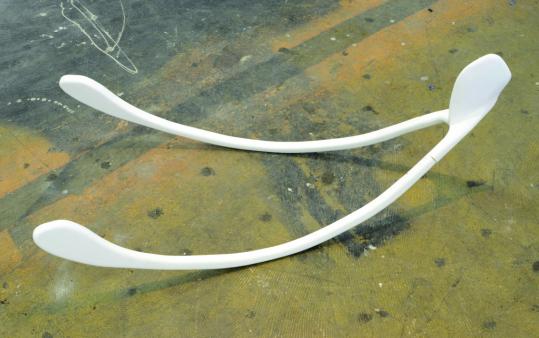 A large crystal ball sits in the middle of Andrew Mowbray’s show, “In Search Of,’’ at LaMontagne Gallery. All right, it’s not crystal. It’s plastic, as are most of the sculptures here, even a dowsing rod that looks like wood, and a giant wishbone. There’s also “Well,’’ a wishing well made entirely of grungy old chunks of Styrofoam, and filled with packing peanuts.

All represent objects people return to again and again to predict or affect the future. Mowbray’s plastic versions put a 21st-century spin on the old art of fortune telling. “In Search Of’’ is a meditation on the luck, happenstance, and alchemy of artistic practice. Artists are no less conjurers than fortune tellers. At their best, they open the vaults of imagination in their viewers and spark responses that have nothing to do with reason or common sense.

The wishbone’s title is “Implement for Studio Practice.’’ The dowser is called “The Curator’’ — and doesn’t a good curator sniff out subterranean wellsprings of artistic merit and share them with the public? “Oracle’’ is a giant Ouija board planchette, sitting low like a coffee table, with a half-empty mug of coffee and an issue of Artforum resting on it.

Mowbray’s “Video for In Search Of’’ shows him pushing (or following?) the planchette over the gallery floor, dowsing with “The Curator,’’ and cracking his wishbone. He’s no high priest. He’s more a likable doofus, hoping that all his odd rituals will coalesce into magic. In all, his show strikes a balance between blind faith and skepticism, which Mowbray applies to art and fortune telling, but can, and perhaps should, be applied to any belief system to which we hold tightly.

Painter Daniel Heidkamp has a terrific exhibit of portraits and interiors in LaMontagne’s project space. The canvases are weirdly democratic. Every spot on the painting holds the same visual weight, pushing a seemingly representative work toward abstraction. In a portrait, that can be unnerving.

Texture, color, and pattern vibrate and shift throughout each painting. In “Who’s That Swirl?’’ a woman in a pink-patterned robe sits before a neon green wall and a lace-curtained window. The paint dances in thick, goopy curlicues over the wall, the robe, and the woman’s dark hair, a gesture that repeats in the curtain, but with none of the impasto. Then, the subject’s skin is smooth as marble.

The one thing Heidkamp misses is nuanced facial expression. Planes and dollops of color describe almost cartoonish visages. These pieces are more about the paint than about the sitters. They send your eye on a thrill ride, careering over the canvas. If Heidkamp were a true portraitist, attention would linger on the face, and that’s not what he’s after.

Final chapter Pierre Menard Gallery shuts its door April 9, when “One of a Kind: An Exhibition of Unique Artist’s Books’’ closes.

“I suppose I see no rationale for having a culture-related business in Cambridge. We do virtually no business there, ever,’’ said owner John Wronoski, who will also close his rare-books store, Lame Duck Books. The gallery and bookshop have been in Harvard Square for six years. Wronoski will continue both businesses privately. “I’d love to be somehow involved in trying to make art a little more relevant in Boston. There is not a lot of enthusiasm. . . . In Boston, there are collectors, but the vast majority buy their art in New York or at auction.’’

He says he may move to New York in the future and open a gallery there.

The show is the perfect send-off for a gallery attached to a bookshop. Organized by Heide Hatry, the exhibit celebrates, in an age of electronic reading devices, the book as an object, its tactility, and the private relationship between book and reader.

The artist team of Nicholas Kahn and Richard Selesnick, whose photographic installations delve into fantastical narratives of historical exploration, couldn’t be better set up to create an artist’s book. Their gorgeous “The Circular River’’ is nearly 6 feet long, featuring 60 panoramic plates depicting a Siberian expedition during World War II.

Jacqueline Rush Lee crafts books into sculptures that resonate with their pasts. “Pod’’ is a circle made of rolled pages, all bubbly seen from the side. The great feminist artist Carolee Schneemann’s shamanistic “Venus Vectors’’ sports 10 glass panels on a revolving base, each “page’’ illustrated with dancers, hieroglyphs, and symbols having to do with female sexuality.

Some artists created books as boxes, treasure troves of mystery and history, such as Steven Daiber’s “Saw Box,’’ an old wooden toolbox filled with pine cones wrapped in 19th-century natural history text. Richard Humann appears to have sliced all the text out of a hardbound book for “Cut-Up,’’ creating a kind of box into which he poured a confetti of letters. Larry Miller’s “Grass Book (The Shape of Things)’’ stands in accordion folds, with brief, calligraphic gestures on each page drawn with blades of dry grass, nodding back to the plant material that makes up the pages.

There’s much here to savor, from text-heavy pieces to painterly schmears, each, as all good books do, beckoning the reader to a dance of imaginations.

ANDREW MOWBRAY: In Search Of

ONE OF A KIND: An Exhibition of Unique Artist’s Books