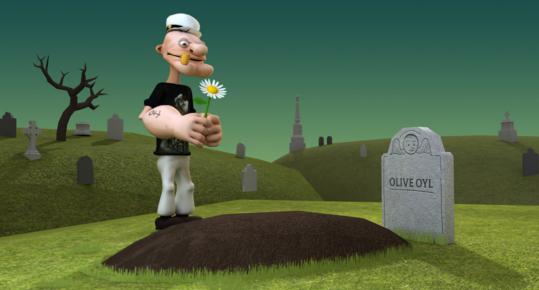 Visual artists have been slow to take up animation. William Kentridge was a pioneer — he made his first animated film in 1989. “Astatic’’ a smart, dynamic exhibit at the Sandra & David Bakalar Gallery at Massachusetts College of Art and Design, looks at the new generation of animators in contemporary art.

Jeanne Verdoux’s pieces fall in the first category. Her “Living Room’’ is a valentine to line drawing, but it has many surprising dimensions. There’s a drawing on the wall of a table with a lamp; a wire sculpture of a chair, and an animation of a woman rising from the shadow the chair casts. Verdoux’s “Post-it Tree’’ is also elegant and deceptively simple: A tree made of Day-Glo-colored Post-its sheds its leaves.

Not all the works share that haiku-like brevity — look at Nathalie Djurberg’s nightmarish claymation narratives. Claymation, with its doll-like moving figures, grabs you like a children’s show, but Djurberg’s three pieces are not for the young. “Turn Into Me’’ follows a nude woman as she runs through the forest, stumbles, and dies. Her body decomposes and is taken over by enormous maggots, and then by animals, who inhabit and reanimate her skeleton. There’s a painterly quality to the way the clay smears and transforms, with each instant of decomposition like a new brushstroke.

Each stroke is an element of animation for Yui Kugimiya, whose animations are short stop-motion paintings, often featuring cats. In “Cat Brushing Teeth,’’ a cat brushes and spits. Kugimiya’s loose, expressive brushwork is declarative about her medium; to see the paint in motion, changing the cat’s expressions and colors, is startling.

There’s much more: Takeshi Murata’s eye-catching digital animation, “I, Popeye,’’ gives the iconic sailor man a 21st-century three-dimensional oomph. The visuals are bolder and brighter, but Popeye has lost everything and everyone he loves. Eddo Stern makes digitally animated heads that call back to Giuseppe Arcimboldo’s 16th-century portraits built from fruit, vegetables, and more (curiously, this is the third reference to Arcimboldo to appear in Boston galleries in the last month). Stern’s version is a digital animation constructed from online gaming avatars, speaking dialogue culled from online discussion boards.

Stern’s pieces delve into masculinity and identity. While not all the works in “Astatic’’ take on such charged topics, it’s fascinating how in this show animation shoots adrenaline into even the darkest themes. In a painting or sculpture, such motifs would be opportunities for contemplation. In these well-made animations, they wash over a viewer like a caffeine tide.

Life in the dollhouse Upstairs, in Mass Art’s Stephen D. Paine Gallery, painting fanboy Joe Fig goes to town in “Inside the Painter’s Studio.’’ He visits the studios of bigshot painters such as Chuck Close, Ross Bleckner, and Julie Mehretu, and re-creates them on a small scale, right down to paint splatters on the floor. This exhibit features sculptures of many studios alongside work by the artists whose workspaces Fig portrays.

Yes, it’s an insider’s exhibit, clubby and mildly self-aggrandizing. But Fig’s miniature studios have the fascination of all intricate models or dollhouses: You want to stick your hand in and play. “April and Eric: 8/10/04,’’ which shows the spacious adjoining studios of married painters April Gornik and Eric Fischl, is a marvel. Each has several canvases up on the wall, with the artist moodily standing in the middle, perhaps meditating on the next brushstroke.

Nearby hangs Gornik’s “Wind, Hill, Cloud,’’ a lush, vertical landscape popping with color, and Fischl’s study for “Bedroom, Scene #3, Mistakes Mistakes! Everything Shakes From all the Mistakes,’’ an intimate scene of a disconnected couple.

Close’s “Self-portrait’’ screen print, set on a diagonal grid, with each square filled with concentric dollops of color, looks psychedelic up close; step away, and of course, there’s the artist’s bearded face. Peer into Fig’s “Chuck Close: 4/25/06,’’ and you’ll see a similar grid set diagonally on an easel, with a tiny photo of Close next to it. It’s like we’re glimpsing the making of the self-portrait that hangs before us.

Fig teases the viewer, with the suggestion that seeing the interiors of the artists’ studios will provide insight into their psychology. That might have worked had he chosen five workspaces to spotlight. But there are 20 such sculptures here, and while some are more organized and some more cluttered, they begin to look the same. Cups of paint; palettes; brushes; worktables: All the materials necessary at hand for making art.

Occasionally, Fig focuses on a smaller aspect of a studio. “James Siena Floor Sculpture’’ is a larger re-creation of a cabinet upon which the pattern painter stows cups, bottles, and a funnel of paint — still par for the course. Only Fig’s “Ryan McGinness Wall Sculpture’’ strays: It’s a shelf neatly stacked with software containers and small books, with re-creations of McGinness’s logo-like shapes carefully ordered in front.

In the end, the artists’ works probably tell us more about their inner workings than their studios do.

JOE FIG: Inside the Painter’s Studio