Ensemble reveals its depth in ‘The Secret Garden’ 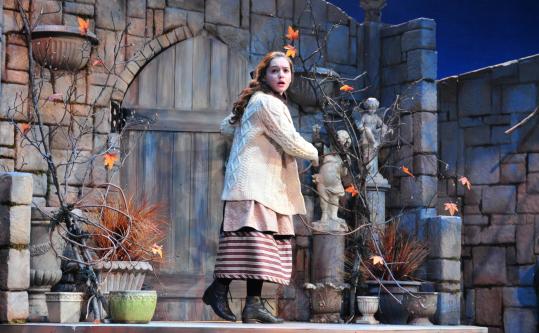 This adaptation combines the talents of Wheelock Family Theatre’s longtime producing team, Susan Kosoff and Jane Staab, who focus on the story’s themes of loss and new beginnings. Set in 1849, “The Secret Garden’’ tells the story of Mary Lennox (Doherty), a privileged 11-year-old raised in India, who is left alone in the world after the death of her parents. She is brought to a house on the misty moors of Yorkshire, England, by a stern housekeeper (Parker) to live with a mostly absent uncle. The house is full of secrets, including a garden locked behind a hidden door and a young boy named Colin (Ellis Gage) hidden away in a room waiting to die.

As Mary accepts her new life, she becomes determined to revive the garden, and along the way, inspires Colin’s will to live. Burnett’s story is simple, and its beauty lies in the children’s efforts to overcome the setbacks life has handed them and plant the seeds for a beautiful harvest to come.

Composer Staab sets the tone with the spirited opening number, “No, I Don’t Like It,’’ and reinforces Mary’s stubborn, disagreeable nature with “Tha’ an’ Me Are Alike,’’ her duet with the grumpy groundskeeper, Ben Weatherstaff (Neil Gustafson). But we watch Mary’s heart begin to warm with the help of an effervescent maid Martha (Jennifer Beth Glick) and her brother Dickon (Andrew Barbato). She finds her first friend — “My Friend’’ — in a robin who shows her the key that lets her into the secret garden.

In Act 2 Mary meets the cranky and demanding Colin, who tries to explain his empty life to her with “If You Are Ill.’’ Gage, who nearly steals the show with his full throttle temper tantrum (which delighted the children in the audience), has a terrific voice, which, when paired with Doherty and Barbato for “Let’s Do It Now,’’ creates some beautiful harmonies.

Musical director, orchestrator and conductor Jonathan Goldberg makes the most of his five-piece orchestra, giving Staab’s music a surprisingly full-bodied sound. But the most rewarding contribution in this production comes from Lazure, whose set allows secrets to be revealed with dramatic flourishes, and finds a wonderfully imaginative way to mirror the story’s themes of growth and renewal right before our eyes.

The choice of “The Secret Garden’’ seems particularly fitting for Wheelock Family Theatre, which has nurtured a love of theater in so many children and watched them blossom over 30 growing seasons.

Musical with book by Susan Kosoff, music by Jane Staab, based on the book by Frances Hodgson Burnett.