Taking measure of a man

At the ART, a play explores R. Buckminster Fuller's ideas and idealism 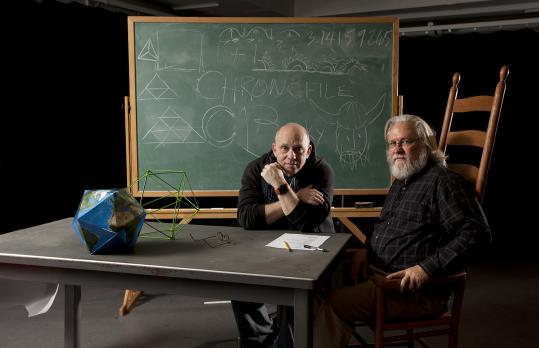 Thomas Derrah (left) and D.W. Jacobs at the ART’s Loeb Drama Center, where Derrah will play R. Buckminster Fuller, the father of the geodesic dome, in a play written and directed by Jacobs. (Yoon S. Byun/Globe Staff)
By Laura Collins-Hughes Globe Staff / January 9, 2011

CAMBRIDGE — High on a hillside, amid the neogothic splendor of Mount Auburn Cemetery, sits a jaunty little block of granite, a headstone friendlier and more inviting than the rest. “Call me trimtab’’ its carved legend reads, the words a nautical reference — a metaphor for an individual’s ability to change the world in the same way a small flap on a rudder, a trim tab, helps to steer a large boat. Beneath the phrase is the nickname of the man who coined it: Bucky.

Shadowed by an enormous white oak, it is the grave of one of the cemetery’s most illustrious residents: R. Buckminster Fuller, the Milton-born inventor and untrained architect, the father of the geodesic dome, the voraciously curious polymath whose preferred name for the planet was Spaceship Earth. He lies with his wife, Anne Hewlett Fuller, who died 36 hours after he did, in 1983. They’re only a few yards from his great-aunt, the noted transcendentalist Margaret Fuller, killed in an 1850 shipwreck with her husband and their toddler. An old New England family, the Fullers began burying their dead at Mount Auburn when the cemetery was new.

They were an old Harvard family, too, and Bucky was a student at the university twice, kicked out — “fired,’’ he liked to say — both times for over-socializing and under-studying. This Friday he returns to campus, in a fashion, when the American Repertory Theater begins previews of the one-man show “R. Buckminster Fuller: The History (and Mystery) of the Universe’’ at the Loeb Drama Center. An entertainment modeled on the celebrated lectures Fuller traveled the world to give, it stars ART veteran Thomas Derrah as Fuller. D.W. Jacobs, who directs, also wrote the script, in which the famously voluble Bucky tells the story of his life, expounds on some of his key ideas, and occasionally bursts into song.

“Another part of my father’s self would easily have been a song-and-dance man,’’ Fuller’s daughter, Allegra Fuller Snyder, said by phone from Pacific Palisades, Calif., where her par ents moved in their last years to be near her.

Snyder made the same observation to Jacobs in 1995, the year they met when he helped to organize a Fuller centennial celebration. The notion that the renowned thinker might have liked to be a showman convinced Jacobs that Fuller’s life could be the stuff of theater, and he began crafting the play from Fuller’s own words.

In it, Bucky meanders his way from recollections of kindergarten, where he discovered the integrity of triangles by building a tetrahedron out of toothpicks and peas, to old age, with its intimations of death. In between is talk of icosahedrons, vector equilibrium, three-wheeled Dymaxion cars, and Fuller’s 4-D Tower houses from the 1920s, which — as Derrah observed with some amusement — look like they’re straight out of “The Jetsons.’’

Spaceship Earth Fuller advocated what he called a “design science revolution.’’ His inventions, many of them to do with housing, were intended as design solutions to humanity’s problems. An early proponent of sustainability, he placed great faith in technology as a means of doing more with less. Convinced that the planet had plenty of resources to support the passengers of Spaceship Earth, he believed that if people didn’t have to fight over what they needed to survive, war would be rendered obsolete.

Jacobs, an actor and director who cofounded San Diego Repertory Theatre in 1976 and was its artistic director until 1997, had been a Bucky admirer since his freshman year at the University of California, Santa Barbara. The Ezra Pound scholar, Hugh Kenner, brought the 72-year-old Fuller there for a visit, and Jacobs’s older brother urged him to attend a lecture.

It was the spring of 1968, and Jacobs thinks in retrospect that it must have been between the assassinations of Martin Luther King Jr., in April, and Robert F. Kennedy, in June. That summer’s riots at the Democratic National Convention in Chicago were yet to come as the war in Vietnam raged on, intractable. These are the kinds of details that people overlook in sentimentalizing the 1960s, Jacobs believes.

In the midst of such cultural turmoil, Fuller offered what Jacobs called a “mixture of idealism and pragmatism.’’ A central tenet of the gospel he preached in his lectures, frequently to student audiences, was faith in the individual’s ability to use technology to remedy the ills of the nation and the planet. Part of what he gave his listeners was hope.

“And whether you were right, left, center, there were just a wide range of people who came to listen to him talk because he was breaking down these huge problems into — well, like an engineer,’’ Jacobs said. “He was just this little guy coming into a room and going, ‘Yeah, well, these are big problems, but we can solve them.’ And it was so disarming to have somebody who looked like your grandfather coming in and going, ‘You know, we can fix this.’ ’’

‘Thinking out loud’ To craft a play about Fuller, Jacobs began with the book “Buckminster Fuller: An Auto-Biographical Monologue/Scenario,’’ edited by Snyder’s late husband, the documentarian Robert Snyder. Later he incorporated Fuller’s words from other sources as well, then shaped the text and its rhythms with poetry in mind.

The script is composed not of acts or scenes but of more than 100 numbered and titled sections, each on a different Bucky topic. The concision was a necessity — Fuller was known to take hours to answer a single casual question, not a viable option in a play — but it was also a structural response to a technological obstacle: Jacobs wrote the script using screenwriting software, which is not designed to accommodate long monologues. It forced brevity on him.

No such constraints were imposed on Fuller, who didn’t even break up his marathon lectures by engaging in give-and-take with the audience. He was born with poor eyesight, and his hearing had been damaged during World War I, which made it difficult for him to understand people in large groups. He did all of the talking.

“He always said what he was doing was thinking out loud,’’ said Snyder, who is scheduled to make a post-performance appearance at the ART on Jan. 16 as part of a discussion series built around the production. “There was never any preparation of these talks.’’

That is in marked contrast to what is required of Derrah, charged with playing Fuller alone on the stage in a scripted, two-act monologue. A couple of days before the new year, he was taking some solace — in a misery-loves-company way — from a New York Times item in which the actor John Leguizamo alluded obliquely to “a traumatic experience’’ that for a while had made him want to steer clear of solo shows.

Derrah is no stranger to one-man plays; in 2001, he performed Dario Fo’s “Johan Padan and the Discovery of the Americas’’ at the ART and in New York. Even so, he said he’d recently had a moment of feeling frightened and intimidated by the demands of the Bucky show.

But he added, “This thing I’m describing to you about shutting down in the midst of this sort of blind terror — it doesn’t last.’’ He laughed. “It’s intermittent. So you have these moments of clarity where you — well, I don’t know if they’re clarity. Maybe they’re delusional. But you go,’’ and here he slipped his voice down an octave, adopting a comic rasp that made him sound like Harvey Fierstein’s little brother, “Oh, that’s no problem. Sixty-six pages. I can talk about an icosahedron. Tetrahedron. Octahedron.’’

Fusing art and science The play, Jacobs said, is meant to be “a pileup of ideas,’’ some immediately comprehensible to the audience, others more difficult to grasp. But Fuller’s investigations of the world were heavily dependent on his own experiences, and his narratives were strewn with anecdotes. One Bucky relates in the play is about his daughter, at age 12, telling him that the physical stillness he learned growing up in Boston was getting in the way of his ideas.

Snyder, who became a dance ethnologist at the University of California, Los Angeles, said the story was true to life. Reflecting an upbringing that prized the fusion of art and science rather than the conventional separation of them, she disagreed with what she called “the Boston [notion that] you can be intellectual, but don’t get too creative. There’s a lot of restriction, I think, in the proper Bostonian approach to things.’’

Snyder was raised in New York, where her artist mother painted watercolors of her father’s designs not because the couple was working in tandem but because he would have his models out, “probably in the middle of the dining room table,’’ their daughter said. “We used to live in very small apartments where the dining room table and his desk were usually simultaneous.’’

Those were the decades of her father’s obscurity. Fame arrived only in the 1950s, blossoming in the years after he invented the geodesic dome. With celebrity came audiences eager to hear what he had to say.

Fuller’s own narrative of his life turns on a central episode in 1927, the year Snyder was born. Broke, discouraged, despairing, he stood on the shore of Lake Michigan in Chicago, where he was living with his wife and baby, and contemplated suicide. Instead of ending his life, however, he resolved to dedicate it to humankind — to bettering the universe. It’s a tale he told often, and he tells it again in Jacobs’s play.

But Fuller’s own archives have raised questions in recent years about the veracity of that story, suggesting that he may have engaged in self-mythologizing. So is there a mixture of truth and myth in the play?

“Balancing elements of a life may appear to weigh things one way or another,’’ Snyder said. “Is that myth or another level of reality? I wouldn’t dare to say myself.’’