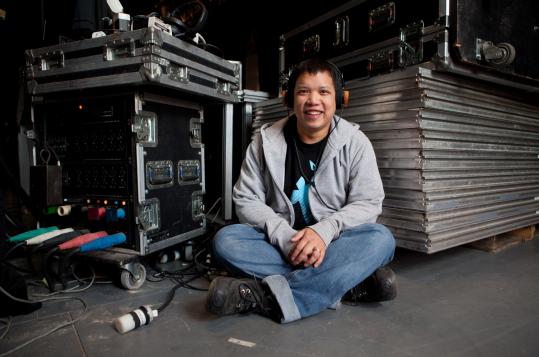 “Space Cadet,’’ says DJ and multimedia artist Kid Koala, “dwells on themes such as isolation and interconnectivity. This is a story for our time.’’ (Photos By Matthew Cavanaugh for The Boston Globe)
By Jeff Wagenheim Globe Correspondent / December 11, 2010

NORTH ADAMS — The person looking down into the cavernous performance space through the picture window along a second-floor corridor is, appropriately enough, an overseer of this work-in-progress.

“She has her say about everything,’’ Kid Koala says as he takes a break from helping paint one of the vast canvases, each at least 20 feet wide and 8 feet tall, that are lined up next to a bare stage. There’s not a hint of oppressed artist in his voice. Koala rather enjoys the input of the person in the red dress who’s watching from above, because she’s partly the inspiration for this work. And besides, she’ll be watching for only a moment more before heading off to Kidspace.

Kid Koala, a Montreal-based turntablist whose given name is Eric San, has scratched vinyl around the world in dance clubs, music halls, and even arenas. He’s opened for Radiohead (including once at Suffolk Downs), Björk, and the Beastie Boys, performed with the Preservation Hall Jazz Band and an incongruous mix of musical friends. Currently, Koala is part of the hard-edged hip-hop/rock foursome the Slew. But he has spent the past week at the serenely sprawling Massachusetts Museum of Contemporary Arts, preparing a multimedia experience for tonight’s two shows in the 13-acre campus’s largest performance space, the Hunter Center.

“Space Cadet’’ is based on Koala’s soon-to-be-published graphic novel of the same name, the story of a girl astronaut and the robot guardian she leaves behind to explore the universe. “It dwells on themes such as isolation and interconnectivity,’’ says Koala, 36. “This is a story for our time.’’ The first-time dad doesn’t specify whether he means the culture at large or his little family.

Along with images from the book projected onto a large screen, the Mass MoCA performance features Koala orchestrating a soundtrack on five turntables and a piano. The ambiance will be more lullaby than dance club. The audience will be seated on the floor, reclining on six inflatable backrest pods, each of which can handle 35 people, for what Koala refers to as “a quiet time concert.’’ Everyone will wear headphones, advancing the story’s themes.

Audience members will start in a separate space, a gallery where they can view artwork from the book and listen to a short guitar-and-turntable set by Koala and his friend Terence Bernardo. There also will be much interactive machinery at hand, including a Wurlitzer cassette jukebox, which people can use to create their own soundtrack, and a photo booth, with audience-generated photos to be used in an intermission video game. Feeling ambitious, Kid?

“This thing just snowballed,’’ he says, laughing and looking around at the vast space and all the crates of equipment still to set up. “We’re so bored in Canada in the winter, we just kept thinking up new stuff to do. It turned into this big party.’’

The party will be kid-friendly, because that’s what Kid Koala is. A onetime first-grade teacher who studied early childhood education at McGill University, he ruefully recalls growing up at a time when there were no gallery shows based around turntables. Nonetheless, he began scratching when he was 12, “that period when you’re trying to find something to sink your teeth into.’’ For some kids, it’s sports. For others, skateboarding. For young Eric San, it was turntables.

“All I wanted to do, from the second I got home, was scratch records,’’ he says. “I wasn’t old enough to go to clubs, so for my first decade of DJ-ing, I just did it alone, making tapes.’’ He fully expects that, at some point during one of tonight's performances, he’ll be joined onstage by his daughter.

Kid Koala began “Space Cadet’’ while his wife was pregnant and worked on it through his daughter’s first year. He created much of the music late at night, while Maple was asleep, keeping the sounds unhurried and peaceful so as not to awaken her. (Smart dad.) When he was invited by Mass MoCA to turn the book into a performance, it was up to his wife, set designer Corinne Merrell, to help bring the story to life. “What a great opportunity Mass MoCA has given us,’’ she says. “All this space, so many possibilities.’’ Adds her husband: “We live for this, to put a team together and dream up something. We’ve been looking forward to this all year.’’

“We’re excited to see what he does. We love works that blur the lines between different media,’’ says Sue Killam, Mass MoCA’s managing director of performing arts. “We think of ourselves as a laboratory for new art. It’s a rare opportunity for artists to realize their work in a space where it can be seen by an audience, to see how it flows. That’s valuable, even if it can be scary for some artists.’’

Kid Koala is not scared. “When you balance your show on five tiny needles,’’ he says, “disaster is always right around the corner. But that’s what makes it fun. It’s like surfing.’’ Or, in the case of “Space Cadet,’’ free-floating in a weightless netherworld, headphones on. “Then again, I’m not sure what I’ll do,’’ he says, “if I look up at the audience at intermission, and everyone is fast asleep.’’

Maple San would probably chalk that up as a success.

Jeff Wagenheim can be reached at wagenheim@swersey.com.