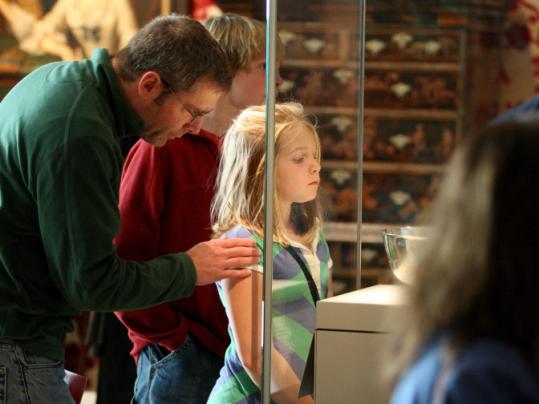 Cooper Toulmin of Lexington and his children Zoe and Cooper gazed at a display in the MFA’s new wing yesterday. (Essdras M Suarez/Globe Staff)
By Matt Byrne Globe Correspondent / November 21, 2010

After a 10-hour bus ride from Alexandria, Va., Steven Troxel was ready.

He showed up early yesterday morning, wore comfortable shoes, and waited for more than two hours outside the Museum of Fine Arts to be the first person in a line that by 10 a.m. snaked down Huntington Avenue and around the building.

Troxel was among the thousands who crowded the MFA’s Art of the Americas Wing on its first day open to the public yesterday, a landmark event in the institution’s history and a substantial addition to its gallery space.

“I’m a huge fan of world-class museums, and the MFA is definitely one of those,’’ said Troxel, 45, as he sat in the airy glass-and-steel atrium that connects the old building to the new wing. A museum aficionado, Troxel said the treasures inside the 53 new galleries are worth the wait.

“They have a first-class collection that now has a premiere showcase,’’ he said.

The gallery had been open for 30 minutes when the museum hit its average weekend day attendance number of roughly 2,500 visitors, said Kelly Gifford, a spokeswoman for the museum.

As of 5 p.m., more than 12,000 people had passed through the MFA’s doors for the free community day, according to crowd counts from the museum.

Welcoming the crowd was MFA director Malcolm Rogers, who said in an interview before the ceremony that he has “so many people to thank,’’ including the museum’s staff, most of whom sported red vests and carried maps to help the crowd move through the galleries.

In his remarks to the crowd, delivered from the second-floor landing of the glass staircase that is the main entryway to the three floors of galleries, Rogers struck a tone of inclusion, urging access and openness for all segments of the public.

“Our goal through this project is to make the MFA more accessible,’’ Rogers said. “This is your museum.’’

A choir of 13 voices sang “America the Beautiful,’’ and at the blare of two trumpets that rang through the vast modern courtyard, about 60 children from the Boys and Girls Clubs of Boston, dressed in red, streamed into the galleries.

Inside, the paintings, sculptures, and furniture installations became the instant stars of the day. Arrangements were critiqued, brush strokes examined. Fingers jabbed at glossy maps. Staff members gave spotlight discussions in the galleries, some containing as many as 63 works, hung salon-style on nearly every square inch of wall.

In one room, children squeezed through throngs of adults, whizzing past the towering painted vases at the center of a room of John Singer Sargent portraits. The vases flank one of the museum’s most popular Sargent works in which they are also depicted, entitled “The Daughters of Edward Darley Boit.’’

One of the many poring over the Sargents was Juan Ramirez, 23, a Chicago-based portrait artist who spent the past few weeks in New England for a gallery opening in Connecticut. The MFA was the last stop before his evening flight home, he said.

“I like that they’ve dedicated certain rooms to certain artists,’’ said Ramirez, adding that he was struck by the “immense beauty’’ of the new galleries.

But it wasn’t just the artwork that excited some of the estimated 1,800 who stood in line to attend the opening.

The regal nature of the opening thrilled Rolf and Julie Goetze, who nearly 53 years ago went on their first date at the museum, when they were students at Harvard and Radcliffe.

He said the museum’s collections have always been exemplary, although the galleries can be confusing to navigate.

The Cambridge couple, both 73, said they were excited to see works by John Singleton Copley and others.

At the sound of the trumpets, Julie Goetze beamed and grabbed her husband’s arm.

“This is like being in medieval times,’’ she said. “They make it so memorable.’’

Matt Byrne can be reached at mbyrne.globe@gmail.com.