Peabody Essex to be 1st museum to host Chinese works 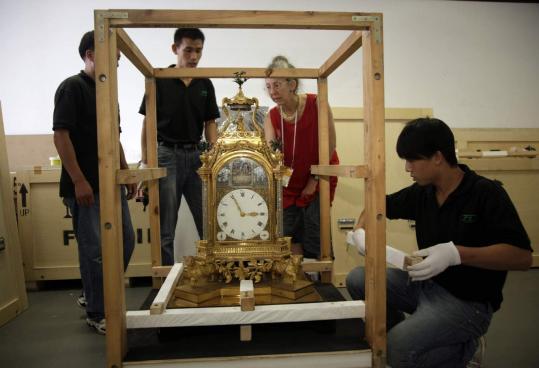 Deep within the Forbidden City of Beijing lies a compound of pavilions and gardens, a quiet space of Buddhist shrines, bamboo groves, carved thrones, and magnificent artwork. For 86 years, ever since China’s last emperor was forced out, it has been sealed off to the public.

Now, for the first time, the world will get a glimpse of the treasures long locked inside.

And the first look will go not to the Chinese people, but to patrons of Peabody Essex Museum in Salem.

The objects, which range from 18th-century paintings and murals to exquisite pieces of furniture and jades, will make up an exhibition running from Sept. 14 through Jan. 9 at the museum. The show then travels to the Metropolitan Museum of Art in New York City.

“These are objects created by the finest artists at the time, and they’ve never been seen before,’’ said Nancy Berliner, Peabody Essex’s curator of Chinese art, speaking by phone this week from the Forbidden City, where she and a group of museum workers are readying the objects that will be brought to Salem for the show.

It is extremely unusual for China to send cultural objects abroad, and a special international partnership has enabled the Peabody to be the first in the world to display the 90 imperial objects chosen for display.

The partnership springs from an ambitious $25 million project to renovate the palace garden complex, a project that began in 2001 and won’t be complete until 2019. Officials from the New York-based World Monuments Fund overseeing the restoration were impressed by the Peabody’s earlier installation of Yin Yu Tang, a late Qing dynasty merchants’ house, at the museum. The museum dismantled, transported, and reconstructed the house on its grounds, opening it as a cornerstone of its expansion in 2003. Berliner was deeply involved with that complex project.

After viewing the house in 2004, the nonprofit organization hired Berliner as a consultant, a relationship that led to the museum’s coup. The exhibit, called “The Emperor’s Private Paradise: Treasures from the Forbidden City,’’ is being organized by the museum in conjunction with the Palace Museum, Beijing, and the World Monuments Fund.

This week, as temperatures in Beijing have risen to 104 degrees, Berliner and four museum staff members have watched as Chinese crews meticulously packed up the objects in the palace compound created by Emperor Qianlong in the 18th century and last occupied by Emperor Puyi.

The Forbidden City is one of the world’s most popular tourist attractions, drawing more than seven million people a year. None of the buildings in the Qianlong garden complex, however, have been open to the public.

It is a hushed, contemplative space, Berliner said, where there is often only room to walk single file because the emperor never intended it to be experienced by groups. Of the 27 buildings in the garden complex, just one has been restored so far.

“The feeling inside these buildings and in the garden as a whole is a little bit like being in an incredibly luxurious and contemplative playground,’’ said Berliner. The museum has great expectations for the exhibition, projecting that it will draw up to 85,000 visitors. That would make it the second most-attended at the museum since its reopening in 2003.

But bringing “The Emperor’s Private Paradise’’ to Salem is not cheap. The exhibition will cost $1.8 million, or more than the museum spent on exhibitions for all of 2009. All but $300,000 is being covered through support from the Carpenter Foundation, , Mandarin Oriental, and other sponsors.

In Salem, Berliner hopes to use architectural flourishes to re-create the feel of the 18th-century garden complex. The works on hand will provide a stunning window into the private universe crafted by China’s rulers.

A Buddhist shrine painted on silk shows a series of holy and supernatural figures with Qianlong, depicted in gold, at the center. A carved wooden throne features bamboo thread marquetry, gold paintings, and a jade inlay. And then there is the jade screen depicting the 16 disciples of the Buddha. Only recently did restorers discover that Qianlong, who commissioned the work, had the screen installed in a way that hid the golden images painted on its reverse side.

“He installed it so the panels were actually up against walls,’’ Berliner said. “When they took it out, they discovered that on the side of the panels that faced the walls were these incredibly beautiful paintings of botanical motifs that had never been seen before.’’

Dan Monroe, Peabody Essex director, said he was moved, walking through the hidden space for the first time.

“It shocks you with its immensity,’’ he said, adding, “It’s a spectacular space that was designed for tranquility and harmony.’’