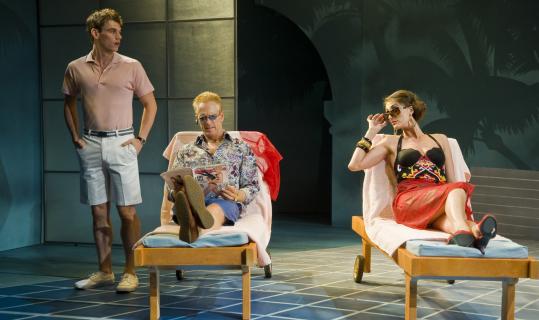 Certainly there’s fun to be had in satirizing the super-rich, super-spoiled denizens of Bel Air, here represented by just three: a bleached-blond record producer, his randy and jaded wife, and the bratty young sultan of “Nubai,’’ who owns the place. But these caricatures are pretty broad and obvious, and, more problematic, there’s not really a sympathetic character to counterbalance them.

Even Nick, the pool boy and protagonist, is just as blindly willing to do anything in the name of success as the people that he (and his creator) want us to despise. An aspiring musician, he pushes himself on the record producer and then, when the wife makes it clear that the only way to the big guy is through her bed, pushes his scruples aside before you can say “casting couch.’’ Meanwhile his love interest — a personal assistant with acting ambitions — seems poised to run off with the sultan just because he’s rich. Are we supposed to care whether these two young cynics end up happy, together or not?

But let’s not forget Nick’s pal, Jack, who’s passing himself off as an authentic Japanese sushi chef — a bit of deception that leads to dreadful kowtowing routines and flied-lice accent jokes that weren’t funny even when they were new, a century or more ago. Or the tightly wound manager, Mr. Lopes, who has a few ethnic issues of his own. (His name rhymes with “Ropes,’’ he insists; Latino? Don’t be ridiculous.) Given these two, you’ll no doubt be shocked to learn that the sultan has gaudy tastes in knickknacks and wears aviator shades with his black leather jacket.

OK, sure, we’re all just here for a good time, and if you’re stereotyping everybody then nobody should be insulted, right? Whether you buy that argument or not (I don’t), it does depend on one critical element: You need to have a good time. And, too often during “Pool Boy,’’ it just isn’t good enough.

Some of the tunes are amusing enough — a little number called “Silly Marimba’’ has its moments, and the final song, “Poolside at the Hotel Bel-Air,’’ combines the evening’s sharpest bits of social observation with a breezy melody that lets you see how the show could sound appealing. But too many others fall into the same midtempo soft-rock groove, and the lyrics (by both Tsakalakos and book writer Janet Allard) substitute crude shock-rhymes for genuine wit. (It won’t take much imagination to figure out the appropriate rhyme for each character in the second-act opener, “In the Muck.’’ And no, I don’t mean “luck.’’)

Barrington has given “Pool Boy’’ an attractive production, with a cool and versatile set by Brian Prather that uses Nicole Pearce’s lighting to create some nifty pool-reflection effects. The cast, too, is working hard to make the show float — particularly Jay Armstrong Johnson as Nick, though his vocal tone isn’t always as carefully sculpted as his abs, and Sara Gettelfinger as the seductive wife. But it’s going to take some work — particularly in deepening the characters and diversifying the music — to get everybody into this “Pool.’’