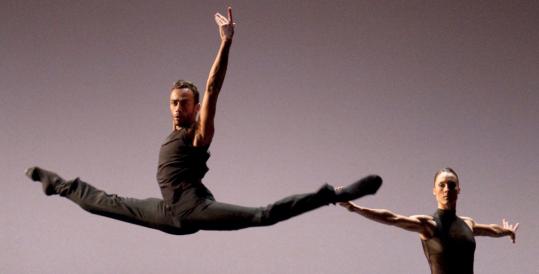 BECKET — The first thing you notice about the dynamic duo billed as “Jacoby & Pronk’’ is extreme physical beauty: highly arched feet, long and slender limbs, leg extensions that go up to the ear. The very next thing you learn, fortunately, is that Drew Jacoby and Rubinald Pronk also possess the true dancer’s intrinsic talents such as musicality and the glowing energy of artistry. There is stardust behind the shapes.

And they have brains and hearts. Appearing this week at the Jacob’s Pillow Dance Festival with a small ensemble (“and Dancers’’), the two prove they’re not just poseurs: They each appear in four of the program’s six abstract dances, their demeanors focused and sincere. And for all her tensile strength, Jacoby is often melancholy.

“One’’ was choreographed in 2008 by Annabelle Lopez Ochoa as a pas de deux, but for the Pillow it has been reshaped into a quartet to include Victor Mateos Arellano and Shirley Esseboom, two capable, mature dancers. Thankfully, the tweaked “world premiere’’ doesn’t lessen the dance’s impact. The duet is essentially the same material now split up between the two couples, and Esseboom dances on demi-pointe rather than, as Jacoby does, en pointe. Its original form is a small masterpiece that showcases Jacoby and Pronk’s many delicious qualities, especially — hence the title — how they uniquely meld as a couple.

The two couples of “One’’ do split up to perform their own duets, Arellano and Esseboom as curious playmates in Hans van Manen’s “Deja Vu’’ and Jacoby and Pronk in a tantalizing excerpt from Christopher Wheeldon’s yearning “Rhapsody Fantaisie.’’ Though it’s probably not practical, this program could have benefited from a longer group piece such as the full “Fantaisie.’’

Arch, if a tad fluffy, the solo “L’efflere,’’ also choreographed by Ochoa, again demonstrates Pronk’s hyperagility, as well as his aura of fey androgyny. Dancing until the end with a red rose stuffed in his mouth, Pronk weaves his body through one long undulation after another, articulating every nuanced ripple, or he shakes on his heels, his body suddenly clamped shut. A few of his endless, high back attitudes made me think of how luxurious he’d be as the swan queen Odette. Why not?

American Ballet Theatre’s David Hallberg also appears as a guest this week in Lauri Stallings’s “Both.’’ He and Jacoby thrillingly toss off their glam-sleek selves, instead moving with strangled tentative contortions. They are by turns goofy and tragically self-conscious, but in the end, as they limp and stutter into an awkward embrace, they are glorious, like two who have found true recognition in another.

However, in Leo Mujic’s “Change Me’’ — this and “Both’’ are world premieres, and though by different choreographers, I wonder if they were meant to be companion pieces — Hallberg returns to his more recognizably exacting technique, then reclines haughtily off to the side. He watches as Jacoby is manipulated and lifted all over the stage by Mujic and Pronk, she still wonderfully strange, sometimes erupting into spasms of untamed movements that echo those in “Both.’’

Each time she nears Hallberg, he kicks or pushes her away, in the end stalking off. Jacoby remains, and though breathing in gasps and muttering, it feels like a triumph. Two, it turns out, is not always better than one.

Correction: Because of an editing error, a photo credit in an earlier version of this story misspelled photographer Liza Voll’s first name.