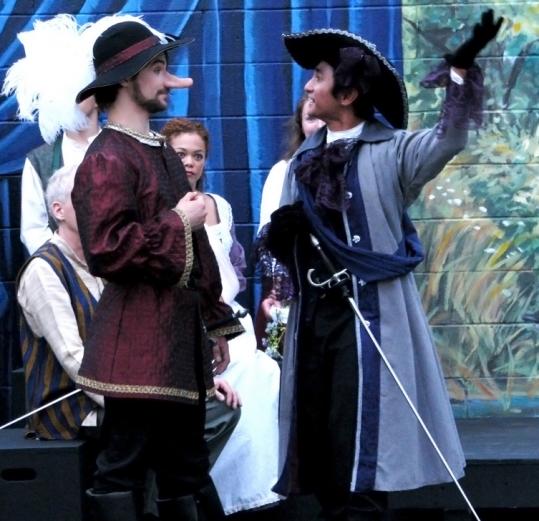 CHELSEA — True love and great heroism won out over jets taking off from Logan, tugboats working the Mystic River, and a harbor cruise boat full of noisy partiers.

Most people know “Cyrano’’ as the root of a thousand sitcom episodes in which a person lacking in confidence helps another woo their mutual beloved. But playwright Edmond Rostand’s original Cyrano is a hero and poet of courage and style defeated in love only by his shame about his gigantic nose.

Cyrano loves his cousin Roxane, but fears she could never return his feelings because of that honker. So he uses his eloquence to help the handsome but tongue-tied Christian win her heart. Things get complicated when the men go off to war, and Roxane makes Cyrano promise to protect Christian.

On Saturday, Danny Bryck was a winning Cyrano, so dashing that it was hard to believe he wouldn’t take a shot at Roxy, despite the sniffer issue. Should he hit the self-doubt a little harder? Maybe, but you couldn’t root for him any more than you already do. Kateri Chambers was a delightfully ripe Roxane and carried off the required obliviousness to their deception without seeming foolish. Joseph Kidawski handled the third-wheel part with grace.

Among the other actors, Brian Turner was a standout as the scheming commander De Guiche, the fourth wheel in this romantic contraption, who lets his guard down only when he believes Roxane could love him. Turner’s performance had a smart, nasty edge, like a corrupt cop in a film noir.

All of that makes Apollinaire’s “Cyrano’’ sound deadly serious, but under director Danielle Fauteux Jacques it’s quite funny, at least until everyone goes to battle. The production values are simple and low-budget, but when you have soldiers bedding down under real trees in the real twilight, it works.

Mike Budwey and Hannah Cranton earned notice playing multiple minor roles. If she was a basketball player, we’d say Cranton was good at moving without the ball. Many of the players switch parts for the performances in Spanish, and Budwey will be interesting to see as De Guiche.

Fixing one little glitch would make the play end more smoothly. Most folks took a moment to recognize Cyrano’s final, two-word zinger as the play’s last line, but the rest of the cast zoomed in from the wings for their curtain call before anyone began to applaud. Not a crisis, but an awkward moment that robbed Bryck and Chambers of a well-deserved ovation. The other actors should hang tight and let Bryck hold his pose until everyone gets it.

At: Mary O’Malley Park, Chelsea. In English Wednesdays, Thursdays, and Saturdays, in Spanish Fridays and Sundays, through July 31. All shows at 7:30. Free, but bring something to sit on. 617-887-2336, www.apollinairetheatre.com