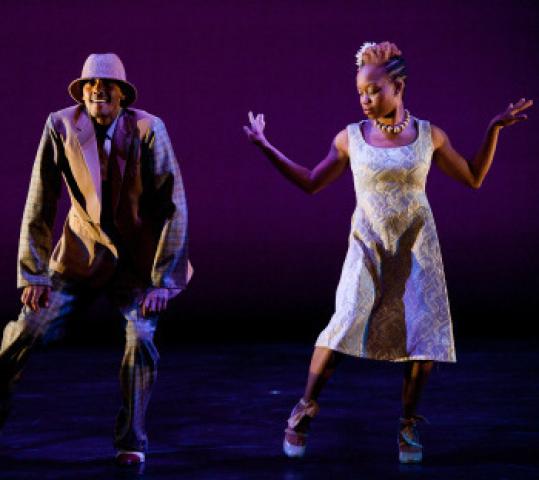 BECKET — Watching Camille A. Brown dance in person for the first time is like observing a hummingbird in nature for the first time: You wouldn’t guess that the small, lovely creature you’ve seen in photographs could be so tenacious.

Well, Brown is full of surprises, as is evident at Jacob’s Pillow, where her company is performing a program of six of her works. What distinguishes this young choreographer right now isn’t primarily her movement vocabulary, which is fairly straightforward modern dance spiked with jazz and African dance. What is striking is that this rising star of New York City’s hip downtown scene is somewhat old-fashioned: Brown is a storyteller, with many tales to tell. Infidelity, life for African-Americans after emancipation, male ritualism from a woman’s perspective, the urban agony of waiting for the subway — Brown is arrested by the sacred and the profane.

In her solo “The Evolution of a Secured Feminine,’’ set to songs by Ella Fitzgerald, Betty Carter, and Nancy Wilson, Brown sports a fedora pulled down past her nose. We can’t see her eyes, but what’s happening physically tells us a lot: Shimmying, defiant razzle-dazzle is followed by defensive boxing-like feints. As she shakes her finger at an invisible partner, we remember that imaginary argument we’ve all had in front of a mirror. When Brown finally takes her hat off, she passes her hand over her face, stretches out her arm, and opens that hand, splaying her fingers, as if throwing her grief and tears at whoever has wronged her.

Brown has gathered a company of earthy movers, deft at giving her dances the physical weight needed to carry serious themes such as in the men’s quartet “Matchstick.’’ Arguing the pros and cons of moving north, away from the poisonous danger of the 19th-century South, the dancers circle and slam a table, or trace dividing lines on it. The men leap and slice their legs, or slump over in chairs, their dilemma evident. It’s a big story, and though the drama is amplified with a searing text spoken by J. Michael Kinsey and live music performed by Brandon McCune and percussionist Joey Oakley, I hope Brown will move toward an expanded model, perhaps even an evening-length work.

“Girlz Verse 1,’’ a world premiere for five women, is about the fabulous, fierce dancing of a West Guinean dance traditionally for men, looked at from another angle. An excerpt from “The Groove to Nobody’s Business’’ and a world premiere duet for Brown and Juel D. Lane, “Been There Done That,’’ reveal Brown’s considerable and effortless humor.

“New Second Line’’ traces the other end of the emotional spectrum in its depiction of the beautiful New Orleans tradition in which mourners follow a brass band after a funeral. Though grief is given its due, exuberance swells with the music of the Rebirth Brass Band. We’re still here, Brown reminds us, so we might as well dance.