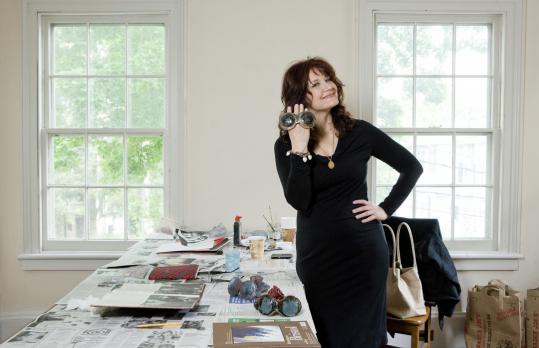 NYACK, N.Y. — Sitting in her studio at the Edward Hopper House Art Center, Karen Finley is peering into her laptop screen, clicking through the online store of the Sixth Floor Museum at Dealey Plaza. Occupying the top two stories of the old Texas School Book Depository in Dallas, the museum exists solely because President Kennedy’s assassin took aim at him from the depository’s sixth floor as he and the first lady rode in a motorcade below.

“How ’bout specials and closeouts?’’ Finley says, and she’s kidding, but not: kidding because some of the merchandise in the museum shop is more than a little cringe-inducing (“tasteful die-cast metal replica’’ of the limousine the president was killed in, anyone?), but not kidding because there is, indeed, a “Specials & Closeouts’’ section of the store. Finley, the performance artist who spent most of the 1990s engaged in culture-war combat as one of the NEA Four, knows this Kennedy territory as the result of extensive research she undertook to create her latest piece, about which she is also not kidding.

In “The Jackie Look,’’ an exploration of grief and trauma, she portrays Jacqueline Kennedy Onassis. As New York Times critic Ben Brantley deadpanned when he reviewed the show in February: “She wears a tailored navy-blue jacket and white slacks. What’s more, she keeps them on.’’ Finley will perform the piece Friday evening at the Peabody Essex Museum in conjunction with the exhibition “The Kennedys/Portrait of a Family: Photographs by Richard Avedon.’’

And, yes, she is aware that her choices of subject matter and venue are slightly incongruous. In the public imagination, she has long been the woman who smears her naked body with chocolate — or was it honey, or yams? (It was all three, at different times, none lately.) But the reality of her work is at odds with the perception of it among people who’ve never seen it. They expect “Medusa or Medea or something like that,’’ she says, and they get her instead.

“I think that people are surprised when they see this show that it’s so serious and it’s layered and it’s complex,’’ says the soft-spoken Finley, who 20 years ago moved from New York City’s East Village to the Hudson River Valley, where she lives with her 16-year-old daughter. “Even though I’ve been performing for a long time and I’m a professor, I’ve received a Guggenheim [Fellowship], still people have a different image of what I’m going to be doing. And I never even did what they imagined I would ever do. So I continue to disappoint them.’’

The new piece takes the form of a photography lecture given by a contemporary Jackie — Onassis’s 1994 death notwithstanding. Finley explores Onassis’s lifelong, post-assassination role in “performing’’ grief and trauma for the culture: an icon demonstrating to the public what those emotional states are supposed to look like, just as in the posed and retouched Avedon photos she modeled the image of a demurely glamorous young wife and mother.

“I stand before you as your stress test, your indicator of how much a person can endure in order to monitor and compare and go on with his or her own life,’’ Finley’s Jackie says.

Like much of the artist’s work, “The Jackie Look’’ is deeply feminist, concerned with the female body and limits to the female role. Its subject matter also happens to draw on some of Finley’s own earliest memories of grief and trauma imagery. At 54, Finley is a contemporary of Caroline Kennedy; she was a 7-year-old growing up in Chicago when the president was shot. And there is a more personal trauma connection: “My father committed suicide,’’ Finley says. “My father died of a gunshot to the head, too.’’

In her studio, on the second floor of the art center that once was Edward Hopper’s childhood home, evidence of her Onassis exploration surrounds her. Pinned to the walls is a series of pictures she’s making, the black ink bleeding into the watercolor paper. On the mantel above the fireplace sit three pairs of ceramic sunglasses like the ones Onassis famously wore — Finley’s clay work being an outgrowth of a sculptural Holocaust memorial she recently created in Austria. One pair of glasses incorporates a red ceramic rose, echoing the bouquet the first lady received when she arrived in Dallas; another, a clay fragment of mourning veil.

Finley has examined death and dying in previous pieces, but in creating this one she was more concerned with the national narrative. “I was interested in public culture: how we take pictures of these public events that are private,’’ she says. “How we save them, how we memorialize them.’’

In life, Onassis never escaped the images of herself as a mourner, but because the Jackie of “The Jackie Look’’ is contemporary, Finley can let her move beyond them and urge the culture to follow.

Beyond controversy
To a much lesser degree, Finley, too, is a public figure who has been frozen at her most famous moment — or, rather, in her most famous decade, the ’90s, when the National Endowment for the Arts’ grants to individual artists came under fire from a Congress newly insistent upon applying decency standards to publicly funded art. With Holly Hughes, Tim Miller, and John Fleck, three other performance artists whose grants had been rejected on those grounds, Finley fought all the way to the Supreme Court, which in 1998 upheld the application of decency standards, 8-1.

The lengthy, high-profile controversy ensured that her career was one that would be remembered, and Finley says she is grateful for that. And while losing the lawsuit was a blow, it did force her to start over and keep her work fresh, not least out of consideration for her now smaller budgets. She was also determined to avoid the martyrdom trap.

“I have seen artists who have been in situations of censorship, whether it’s . . . Lenny Bruce or Mae West, even Josephine Baker. They never got off that dime,’’ she says. “And I made the decision that I wasn’t going to stay on that dime.’’

By the time her NEA grants evaporated in 1990, Finley was an established New York performance artist. By now she’s so established that she’s a professor in the art and public policy department of New York University’s Tisch School of the Arts. Although President Obama’s NEA chairman, Rocco Landesman, has made noises about reinstating individual artist grants, the NEA no longer gives them, and Finley worries about the harm that does to the next generation.

When she was growing up, one of six children, both of her parents worked. But her father, a jazz percussionist who went into sales, suffered from manic depression, and the family’s finances were precarious. Coming from that background makes her see more than just financial value in the grants. “The value is the difference between whether I’m sitting here right now or I probably would have stayed in Chicago and continued to be a waitress,’’ she says. “The difference is, unless you come from a family with means, and I didn’t, you’re going to not be an artist.’’

Finley’s first NEA grant, for $5,000 in 1983, allowed her to move to New York. She still had to work two jobs and go to a food pantry to survive, she says, but having been reviewed and approved by her peers gave her credibility. The NEA’s imprimatur also allowed her to escape the social class she had occupied until then. “Artist: That is a different social status,’’ she explains, and with that elevation came the strength to keep working her day jobs in order to keep making her art.

As for the art she’s making now, she believes the culture is ripe for a new icon, someone who will not model grief and trauma but show us how to put grief aside when it’s no longer useful.