His past, his ‘Prelude’ 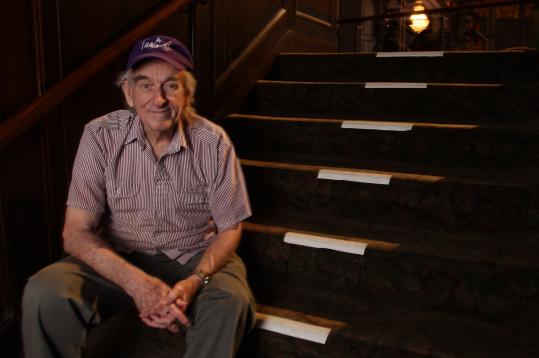 MacIntyre Dixon stars in the Huntington Theatre Company’s “Prelude to a Kiss’’ and will narrate his son Colin’s “Chekhov Triptych’’ at Boston Center for the Arts. (Essdras M Suarez/Globe Staff)
By Joel Brown Globe Correspondent / May 14, 2010

Actor MacIntyre Dixon was born during the Great Depression and has lived long enough to appear in a Jack Black movie.

“I never thought of it that way,’’ the Everett native says with a laugh. “My best friend from childhood lives up in Beverly, and I just contacted him, and he wants to take a walk around the old neighborhood.’’

Dixon makes a face. Not anxious to go back? “No, I’m just reacting because he said, ‘A final walk!’ ’’

Dixon, 78, plays the Old Man in the Huntington Theatre Company production of Craig Lucas’s “Prelude to a Kiss,’’ which starts previews tonight at the Boston University Theatre, directed by Huntington artistic director Peter DuBois. The play takes us to the wedding of Peter (Brian Sgambati) and Rita (Cassie Beck), a happy, romantic young couple. But when the Old Man kisses Rita that day, their souls somehow change bodies. What’s Peter to do?

It’s a tricky role, because sometimes Dixon is the Old Man and sometimes he is Rita in the Old Man’s body. Dixon actually understudied for John Mahoney in the role in a 2007 Broadway revival of the 1988 play, in which he played the Minister.

“I love the idea of playing two characters in the same play and finding out what each one is like. Most of the time I’m playing Rita,’’ he says. “I sit at rehearsals and just stare at [Beck]. She has wonderful characteristics that I haven’t been able to lock on to yet.’’

What about the Old Man? “I identify with him a lot,’’ Dixon says. “You could see him as kind of a dark person. I see him as just this lonely person who has had tragedy in his life and is just searching for some kind of solace, and finds it for a while, way beyond what he would have expected.’’

The characters themselves question whether the transference that takes place is some kind of cosmic accident or an intentional act by a lonely man, Dixon notes.

“There’s one point when I’m playing Rita when I say to my husband, ‘Was it unintentional?’ And he says, ‘No, it wasn’t.’ But I think it was. I think there’s some kind of strange thing that happens between these two people, who have a similar need, and this need makes this strange event happen.’’

DuBois says Dixon brings great qualities to the role. “Mac has just got this incredible warmth, this gentleness, this perception,’’ says DuBois. “He’s very watchable, your eye goes to him, but really we cast him based on this incredible emotional warmth.’’

The veteran actor is “totally unflappable and incredibly inventive’’ in rehearsal, DuBois adds. “He just now found this moment. At the end of the play, when they switch back, Mac took off Rita’s sweater that he’s been wearing, because of course he was Rita, and put on this old, pea-green, ratty coat he was wearing before. It was a small thing, but it’s huge for the story.’’

Dixon was a student violinist at Everett High School when a teacher inveigled him into a production of “The Mikado.’’ He had found his calling. After Emerson College and a stint in the Army, he hit New York and took temp jobs running an elevator and typing.

By 1960, coffeehouses in the Village were moving on from beatnik poets and booking some comedy acts. He ended up forming a team with a friend from Emerson, Richard Libertini (and, briefly, Lynda Segal). Their “Stewed Prunes’’ act got a good review in The New York Times, and before long they were hired for the “That Was the Week That Was’’ on TV.

Their silent-movie-style physical comedy never took off quite the way the era’s verbal and political comedy did, he says, but he and Libertini won solid careers, together and more often alone. Dixon returned to the stage often between TV and movie character roles. Producer Norman Lear was a big fan of the duo and hired them a few times, finding a role for Dixon on an episode of “All in the Family.’’

“I was Archie Bunker’s roommate in the hospital. He was getting treated because he’d got hooked on some sort of drug,’’ Dixon says with a laugh. “I was giving him lectures about not getting hooked on drugs, and he said, ‘What are you in for?’ And I said, ‘I’m an alcoholic.’ ’’

Dixon’s long resume includes roles in Robert Altman’s “HealtH’’ and “Popeye,’’ in “Reds,’’ and in “A River Runs Through It.’’ He also took part in NBC’s full-employment plan for New York actors: “Law & Order.’’ “I was so excited! . . . I played a psycho, a high school principal, and a couple of witnesses, and then I finally got to play a judge.’’

Saundra, Dixon’s wife of 48 years, passed away early this year. His son Colin Pip Dixon, a violinist who lives in Paris, has come to town to keep him company. His son’s presence, he says, is “very helpful.’’ And they’ll hit the stage together on Dixon’s Mondays off from “Prelude.’’

On May 24 and June 7 at the Boston Center for the Arts, they’ll perform Colin’s “Chekhov Triptych,’’ with Colin on violin and Arnaud Ghillebaert on viola and violin. Dixon narrates, reading words from three of Chekhov’s stories. Working with his son will be a highlight of his life, he says.

Dixon previously appeared at the Huntington in “36 Views.’’ Being around the neighborhood is always nostalgic, he says. “It’s wonderful to be acting back in your home town, where you went to college and saw all your early theater.’’ He saw Serge Koussevitzky conduct at Symphony Hall and Ted Williams play at Fenway. As a teenager, he saw Orson Welles’s film of “Macbeth’’ in the very theater where he’ll now take the stage as the Old Man in “Prelude.’’

But let’s focus on work of more recent vintage. What about playing the school-bus driver in Black’s “School of Rock?’’

“Mostly what I remember was it was the coldest weather in the world when we were shooting that, but luckily I was sitting on the bus most of the time,’’ he said. “Those poor kids, they were out in the cold.’’

PRELUDE TO A KISS

May 24 and June 7 at Deane Rehearsal Hall, Boston Center for the Arts. Tickets: $18, $12 students. www.bostontheatrescene.com