The many guises of Sarah Wentworth 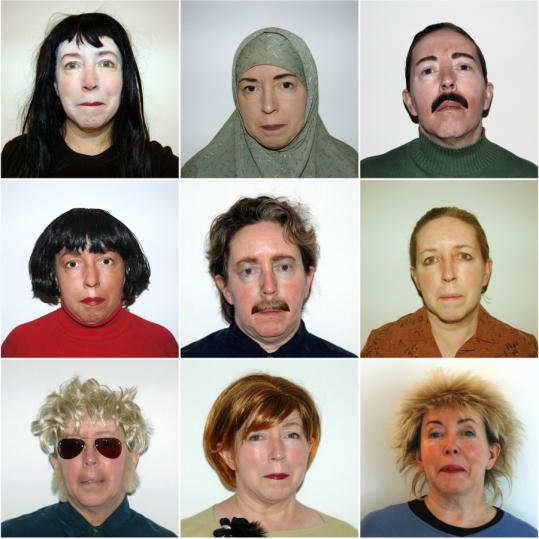 The claustrophobic second-floor maze that is Somerville’s Vernon Street Studios was crowded and hot on Sunday, during the annual Somerville Open Studios. I made the mistake of bringing my 3- and 5-year-old kids. Keeping their chocolate-smeared fingers off the studio walls and precious works of art was more than the combined forces of Dad, Mom, and Grandma could manage. We were about to do everyone a favor and bail (having first made sure to exhaust the generous water and cookie supplies), when we saw a sign pointing to the studio of one Sarah Wentworth. Since this is the name of a former girlfriend of mine, my wife and I agreed (I think) that curiosity needed to be satisfied. So we hoisted the children onto hip and shoulder for one last detour.

Sarah Wentworth, thank goodness, was not my ex-girlfriend, who, last I heard, was representing the Australian national team in Ultimate Frisbee, possibly on a tour of the Netherlands. Nor was she her doppelganger. She was, however, a doppelganger of another kind. Wentworth had covered one wall of her studio with a neat grid of photographs of herself in different guises. She called the series her “Passport Pictures.’’ Each was the same template, the same frame, the same format. But her appearance was wildly different: now bewigged, now wearing a hijab, now male, now female, now white, now black, now young, now old. On the other wall, she had a bigger, salon-style hang of different size photographs, all in different frames (many kitsch, eccentric or elaborately ornate) in different formats. Same idea though: Sarah Wentworth in different guises.

It was brilliantly done, and very convincing. I stayed a while, and it gradually became clear that only about half the people who came in noticed that the model was the same in every photo — and that she was sitting right there on the chair.

I asked my son, 5, if he could work out what was going on. He looked befuddled. When I told him, he refused to believe me. When I said, “Look, that’s her — she’s sitting right there. Why don’t you say hello?’’ Wentworth waved encouragingly and smiled. This, I’m sorry to say, was too much. It was like that party scene in David Lynch’s “Mulholland Drive,’’ when the same guy turns up in two places at once. My son’s face froze. He was visibly freaked out. I realized we had to leave. I waved bye-bye to Sarah Wentworth over my shoulder as we left.