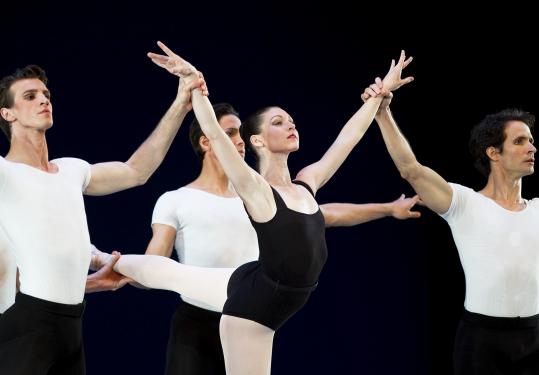 Done right, George Balanchine’s choreography etches itself in your mind like acid on metal. Thursday night, the Boston Ballet, in its presentation of three Balanchine works, left just such a lasting impression — if not with every line, spiral, and pattern, then with many of them.

The most indelible of the offerings was “The Four Temperaments’’ (1946), Balanchine’s groundbreaking neo-classical masterpiece. Danced to a jagged, steely score commissioned from Paul Hindemith, the piece comprises a three-part theme and four variations. It springs from the ancient idea that the body possesses four humors: Melancholic, Sanguinic, Phlegmatic, and Choleric. The work is starkly abstract despite the symbolism of its characters; it blows apart classical ballet conventions, with its turned-in knees and thrusting pelvises, its flexed wrists, splayed legs, and lunges ending in metatarsals pushed to the breaking point.

What particularly astonishes in this performance is the strength of the men — perhaps because it is unexpected.

You expect at the Boston Ballet to see Kathleen Breen Combes (Choleric) splice the air with her legs when she’s lifted, then reshape it into a diamond as she brings her feet together. But you don’t know you’ll see John Lam (Melancholic) land his jumps light as dust and stretch his backward arcs far into tomorrow. Lam is an incredibly musical dancer — a must for Balanchine; he dances between, not on, the notes, generating the impulses that will carry him well before the beat. Nelson Madrigal (Sanguinic), partnering Erica Cornejo, executes spins that melt into butter and beats so quick his feet blur. Carlos Molina (Phlegmatic) opens himself wide and then reverses the process, collapsing deep inside.

Parts of “Apollo’’ (1928) stay with you, too, but fewer of them. Set to music by Igor Stravinsky, the dance portrays Apollo (Pavel Gurevich), the god of music, as a youth as he’s visited by three Muses: Calliope, Muse of poetry (Rie Ichikawa), Terpsichore, Muse of dance and song (Lia Cirio), and Polyhymnia, Muse of mime (Whitney Jensen).

Gurevich is slender and long-limbed. His jumps are high and he’s light on his feet, but he’s a bit gangly, as if his length saps him of some strength. Cirio, on the other hand, is staunch and grounded, her pointed feet sharp as ice picks, her legs slicing into smooth splits and her sternum lifting high as she arcs her back. Jensen is sprightly and fluid — she spirals to the ground, her ankle crossed on her knee, smooth as silk. Ichikawa has remarkably articulate fingers but overall is a bit brittle. Yet despite these reservations, this famous image of the dance burns deep: the three women lean into Gurevich, each with one leg extended at a different height, the lines forming a fan.

The regal “Theme and Variations’’ (1947), set to a lush score by Peter Tchaikovsky, is classical in its choreography, its short tutus, and tiaras but yet remarkable in its ability to create kaleidoscopic worlds onstage. The corps is led by Misa Kuranaga and James Whiteside, and the two make a wonderful pair: They are matched in temperament as well as technical prowess, powerful yet lyrical together.

When he lifts and carries her with her legs extended in a leap, she seems to float across the stage. She jumps low and he grabs her in midair, flipping her back to front and pulling her close; the move has the sensation of a catch in the throat. The two seem, at points, to become one, the line of his body extending hers skyward.

At: The Boston Opera House, Thursday night. Program continues through May 16, with changing casts