From dance to puppetry, all in balance 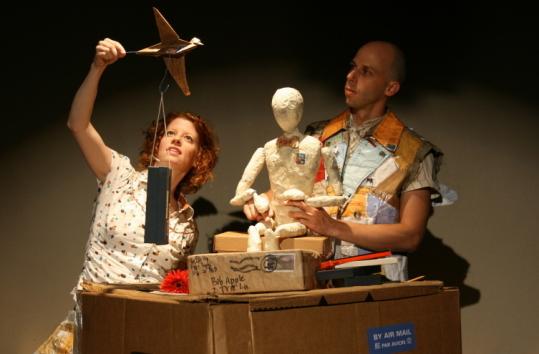 Bonnie Duncan and Tim Gallagher, a.k.a. They Gotta Be Secret Agents, use everything from acrobatics to video in their show. (Androo Sokol)
By Joel Brown Globe Correspondent / May 7, 2010

Their work is a stew of ballet and modern dance and theater and improv and video and photography and puppetry and acrobatics.

“It made sense that if we were secret agents, we would have all these nifty skills,’’ says Bonnie Duncan, who with Tim Gallagher forms the duo known as They Gotta Be Secret Agents.

Winners of two awards at the San Francisco Fringe Festival last September, they’ll bring their comedic show “Poste Restante’’ to the Charlestown Working Theater through Saturday, before taking it to Prague and Dresden in a few weeks.

It’s a hard show to describe. Gallagher trying to stuff Duncan in a box and ship her could be very funny — or not so much. Ditto the puppet that has a crush on Duncan. Also the part where she puts on a shadow show inside her skirt. They’re aiming, Duncan says, to inspire “a sense of wonder.’’

She and Gallagher met when both were members of Boston’s Snappy Dance troupe in the early 2000s. “As we danced more and more together, we did more acrobatic stuff together. We just really worked well together,’’ she says.

They did partner acrobatics in a show for the Rough & Tumble theater company a few years ago and kept going as a duo, performing everywhere from “prestigious dance festivals to dimly lit bars.’’ They kept on even after Gallagher moved to Philadelphia in 2008 and Duncan had a baby last year.

“We really slowed down for six months, and that’s when the post office and dead letter office really kind of clicked for us,’’ she said. “There’s all these kinds of stories that go with the packages you get in the mail.’’

“Poste Restante’’ is a term for mail sent ahead of a traveler to await pickup. Patrons will enter to find a stage filled with cardboard boxes. “Tim emerges from a box and it kind of goes from there,’’ she says.

“It definitely goes from very funny to very poignant to kind of sexual tension to very kind of sad,’’ she adds. “The whole piece is about relationships and missed opportunities, how sometimes you can communicate and it will come across well and click, and other times it just doesn’t click, or else you push it too far.’’

Gallagher works as a medical assistant and plans to start medical school in the fall. Duncan and her husband (Rough & Tumble cofounder Dan Milstein) and their son live in Jamaica Plain; she teaches drama at a Montessori school in Cambridge. Gallagher and Duncan get together regularly to work on the show.

“Having worked together so long, the great thing is we can just physically work together really quickly,’’ she says. “It’s a real gift, especially after having a baby. I just popped right back up and stood on his shoulders or whatever. We just work together.’’

They’ve also received a $5,000 grant from the Jim Henson Foundation — real money for an act like theirs. But their future is uncertain. Gallagher may attend medical school in New York, she says, or perhaps somewhere farther away.

“We have no idea what’s going to happen,’’ she says. “I have hopes for New York. We’re going to do whatever we can between now and August to get the show seen by as many people as possible.’’

One way or another, she plans to continue the partnership: “He hopes to live a balanced life, and I hope that balanced life includes me balancing on him in some way.’’