Life on the street 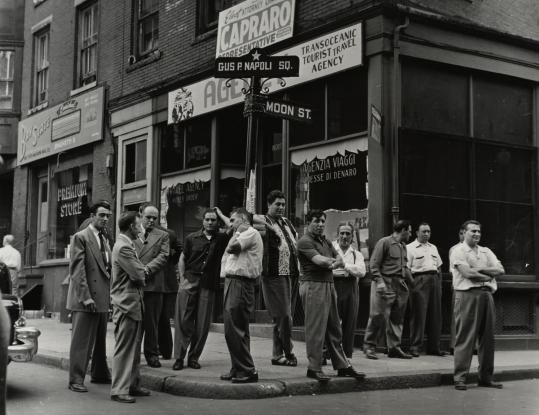 Jules Aarons (1921-2008) was a physicist, and a distinguished one. He worked for many years at Hanscom Field and later Boston University. Scientists, even those whose work is theoretical rather than experimental, as Aarons’s was, need to be skilled observers. This stood him in good stead when he would pick up his camera and photograph Boston neighborhoods.

Aarons’s scientific work involved radio waves in the ionosphere. Perhaps in response to having to deal with something so distant and intangible, he was drawn as a photographer to something far more immediate and organic: street life. He came to that subject as a sort of birthright. A native New Yorker, Aarons very much belonged to the tradition of such classic Big Apple street photographers as Helen Levitt, Sid Grossman, and Leon Levinstein.

You can see a lot of Levitt in Aarons’s work, his interest in children especially. They’re a frequent presence in “Man in the Street: Jules Aarons Photographs Boston, 1947-1976,’’ which runs at the Boston Public Library through June 4. Other frequent elements are signage, graffiti, and a general low-grade energy.

Aarons’s pictures are neither fussy nor celebratory. There’s nothing clinical or overly demonstrative about them. What consistently comes through in his pictures is an abiding, clear-eyed curiosity — a muscular appreciation of urban dailiness. “Just people making do and relating to other people’’ was how he described the essential subject matter of his New York peers. Aarons could just as well have been describing his own work.

Most of the 55 pictures in the show were taken between 1950 and 1960. All are black and white. That’s fitting. Those were not vibrant years for Boston. The shadow of the Depression lingered, and the New Boston of urban renewal had yet to arrive.

For a photographer, the absence of urban renewal was an advantage. The West End, which hadn’t become Charles River Park yet, was one of Aarons’s two favorite haunts, along with the North End. The city was smaller then (or at least felt that way), denser, more tribal. There’s a sense in the show of Boston being not so much city as array of adjoining villages.

The street — the sidewalk, really — was where the action was. Few people had TVs, even fewer had cars. We see guys hanging on the corner, young women primping, old men presiding, kids playing. Always there’s the spectacle of people being looked at — and looking right back. It’s the democracy of the urban eye.

Some of the people have names: “Paul the Barber,’’ “Sarah Reisman, Fashionable Dressmaker,’’ welterweight champion Tony DeMarco, City Councilor Gabriel Piemonte (the latter two are subjects of small photo essays). More often they just have an attitude or a job — sometimes both (the North End baker with the bread-loaf forearms, the Haymarket vendor brandishing bunches of carrots).

Everyone, though, has a face. Often the faces are amazing: the little girl in “Paperbacks,’’ the elderly woman in “Watching,’’ every one of the dozen guys congregating in the North End’s Napoli Square. For all the considerable local color on display, people are what matter here, not place. There’s a universality to these pictures, a human quality that transcends location. That said, you’re a lot likelier — then no less than now — to see, as we do in the show, a “Kiss Me I’m Irish’’ button in South Boston than South Philly.

The show includes a self-portrait. The figure in it looks rather formidable, stalwart even. “External life being so mighty,’’ Saul Bellow writes in “The Adventures of Augie March,’’ “you produce a someone who can exist before it. You invent a man who can stand before the terrible appearances.’’ Jules Aarons was such a someone. You can see it in that picture he took of himself. Better yet, you can see it in the pictures he took of others.