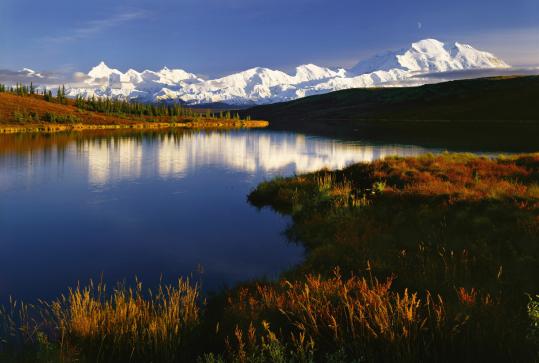 LEXINGTON — Quang-Tuan Luong gave up his career as a computer researcher to take large-format color photographs of national parks. Seeing big, he thought big and shot big. Over the course of a decade, he visited all 58 parks, from Acadia to Yosemite, amassing more than 7,000 images. There are life lists, and then there are life lists. Luong’s undertaking is the life list as epic.

“Treasured Lands: The Fifty-Eight US National Parks in Focus’’ consists of one example of Luong’s work from each park. The show runs at the National Heritage Museum, in Lexington, through Oct. 17.

Large-format cameras are cumbersome to use and require long exposure times. They compensate for those shortcomings by producing images of unrivaled clarity and detail. Luong contributes to the process an exacting eye, a knack for finding delicacy within grandeur, and discipline of heroic proportions. The extremes of climate that can appear so attractive on these gallery walls couldn’t have felt so attractive being recorded in the wild.

The greatest beauty is, of course, visual. The glow of lava floes at dusk in “Hawaii Volcanoes National Park’’ puts the magic back in magic hour. The way Luong captures the juxtaposition of blooming rhododendrons and the seemingly eternal verticality of the trees in “Del Norte, Redwood National Park’’ is wondrous. The topography of the tree bark in “Grant Grove, Kings Canyon National Park’’ is, in its way, as spectacular as any of the rock formations and moun tains Luong photographs elsewhere.

“Remembering a Polynesian myth stating that Creation took place on the Samoan Islands,’’ Luong writes of Tutuila Island, National Park of American Samoa, “I imagined I was witnessing the morning of Creation myself.’’ Looking at the picture he got there, that doesn’t seem hyperbolic. What Luong undertook when he set out to take these photographs was a pilgrimage, really, and these images might better be understood as specimens of religious art than nature photography.

This is both a strength and a weakness. The sense of reverence and love that animates these images is unmistakable. But reverence is a form of acceptance, not engagement. Awe, while certainly called for here, does not allow for the sort of back-and-forth that all art — good, bad, and mediocre — provokes.

“Treasured Lands’’ is overwhelming in ways bad as well as good. There is a reason people don’t go to more than one national park at a time, and that would be true even if the space-time continuum allowed for it. Mae West said that too much of a good thing is wonderful. Clearly, she didn’t spend much time in a national park — or if she did, she didn’t spend it outdoors.

Conceptually, it makes absolute sense to hang these images together. Visually, it’s a mistake. Feasts aren’t palatable — certainly they’re not digestible — when every dish is a fabulously rich entree. “Treasured Lands’’ presents the same problem Ken Burns’s recent PBS series on the parks system did: exaltation fatigue. In fact, a series segment about Luong plays over and over in one of the galleries. By the third go-round, Dayton Duncan’s otherwise-amiable voice sounds as annoying as a car alarm in Denali.

Also, it’s the pristine aspect of the parks that draws Luong, and understandably so, not their human aspect. No person is visible in any of the photographs, which is as it should be — except that it’s not. A national park is a human construction, a splendid and necessary one, but no less an artifice for that fact. A national park is not natural as, say, a glacier or canyon or waterfall is. This isn’t to ask for images of litter or traffic jams. But it is to note a highly limited, and effectively superficial, view of a subject whose magnificence owes something to its intellectual complexity as well as its environmental sublimity. One recalls the words of William Blake (no friend of dark satanic mills), “Where man is not, nature is barren.’’ Luong would disagree, but that there’s something sterile about these glorious images can’t be denied.

Classic cinema
Stefanie Klavens, a Boston photographer, grew up going to one of the few remaining classic movie houses, the Senator, in Baltimore. It was, you might say, her Yosemite, her Yellowstone. For some years, she’s been seeking out such theaters, from Los Angeles to Buffalo, to photograph them. (Presumably she catches a few showings, too.) Klavens shoots on color film, using only available light and long exposure times. Twenty quite-gorgeous examples of her work make up “The Art of the Movie Theater: Photographs by Stefanie Klavens,’’ which runs at the National Heritage Museum through May 31.

Her images remind us that where now there are three important moviegoing words — what, who, and how — there used to be a fourth, where. That was back when theaters were grand, and expectations for the moviegoing experience even grander. In their own way, such places as Boston’s Paramount, now newly renovated, or New York’s Radio City Music Hall, are national treasures, too.

Klavens follows in a small but choice tradition of movie-theater photography. Hiroshi Sugimoto’s black-and-white series of theater interiors is the best known. Drive-ins have benefited from all sorts of famous photographers: Robert Frank, O. Winston Link, Stephen Shore, Richard Misrach, and at least one famous director, Wim Wenders. In fact, Klavens has a separate ongoing project (not included in this show) photographing drive-ins.

I’m happy to say I’ve actually seen a movie at one of Klavens’s theaters, the Egyptian, in Delta, Colo. It was “The Lion King.’’ As chance would have it, I spent the next afternoon at Mesa Verde, the cliff-dwelling site that became one of the first national parks. May the spirit of John Muir forgive me, but I had a much better time at the theater.

Movie theaters from across the country keep Old Hollywood alive.

TREASURED LANDS: The Fifty-Eight US National Parks in Focus THE ART OF THE MOVIE THEATER: Photographs by Stefanie Klavens