In beautiful surroundings, a cornucopia of exhibitions 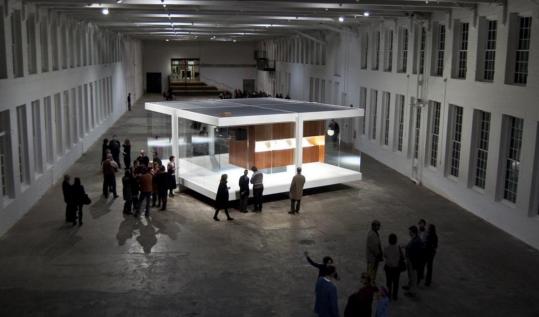 At Mass MoCA, Iñigo Manglano-Ovalle’s “Gravity Is a Force to Be Reckoned With’’ is based on Mies van der Rohe’s “The 50x50 House.’’
By Sebastian Smee Globe Staff / March 7, 2010

Few parts of the world make the prospect of a day or two’s museum-hopping quite as inviting as Western Massachusetts. Many visitors, inevitably, will be inclined to wait for the weather to warm. If you want my advice, don’t. The countryside is austerely beautiful this time of year, and a cornucopia of exhibitions, many of which will close before the summer, means that for art lovers, it’s a perfect time to travel.

On a recent trip to see “Giovanni Boldini in Impressionist Paris,’’ a dazzling show at the Sterling and Francine Clark Institute (reviewed in G, Feb. 23), I stayed overnight in Williamstown. That day and the next, in Williamstown, North Adams, Pittsfield, Northampton, and South Hadley, I saw more than a dozen shows addressing everything from panel painting in early Renaissance Italy to contemporary art that flirts with invisibility. In Pittsfield I took in a show of arms and armor from around the world, in Northampton a sound installation in a college greenhouse, and in North Adams a glass-walled modernist house turned upside down in the middle of a vast old industrial building.

That last was an unforgettable installation at Mass MoCA by Iñigo Manglano-Ovalle, who was born in Madrid and raised in Bogotá and Chicago. He earned degrees in art, art history, and literature at Williams College in the early 1980s, so his show at Mass MoCA, which is complemented by a screening of one his videos at the nearby Williams College Museum of Art, is a salute to an acclaimed alumnus.

The upside-down house is based on “The 50x50 House,’’ a 1951 experiment (never built) in glass-walled modular housing by the architect Mies van der Rohe. Except that homage, as so often happens, here turns to parody: The building is at half the scale, and what was once the ceiling is now the floor. All the furniture, fittings, and appliances are also upside down. Adhering to an upside-down coffee table are an ashtray, a packet of cigarettes, and a notebook.

All this is intriguing enough. But involuntary brain twitches are occasioned by two elements that don’t fit: On the “ceiling,’’ which is in fact the sculpture’s floor, lies a shattered coffee cup and a stain of spilled liquid. (I overheard several people ask whether this evidence of actual gravity, in a setting where everything else seems to defy it, was intended by the artist.)

And “on’’ the coffee table, propped against something else, is an iPhone. Every few minutes it rings, and a face appears (upright, not upside-down) and launches into a haunting monologue. Full of eloquent anxiety, the speech is addressed to the unknown owner of the phone, and although hints are provided, nothing quite adds up.

The entire installation is remarkable. It induces childlike pleasure (try resisting the impulse to turn your head upside down), but also prompts mournful philosophical reflections on how apparently tiny glitches in pure rationality can have turbulent, world-altering consequences, and on how missed messages can congest into ominous unknowns.

In a neighboring gallery, Mass MoCA is screening a related Manglano-Ovalle film, “Always After (The Glass House).’’ It’s a short, riveting work that shows, in hypnotic slow motion, the moments after a wall of glass shatters and a giant broom begins sweeping up the glistening shards, which resemble diamond-studded surf.

Mass MoCA is enormous, but it’s eminently negotiable, so that it’s easy to find yourself bumping into shows or installations you hadn’t known were there. The museum was charging no admission the day I visited; I’ve never seen so many people in a museum of contemporary art. There were the expected groovy young things, but just as many grandparents, infants, school kids, and young couples.

Tucked away in one of the smaller galleries was a show offering itself as an antidote to image glut and spectacle. “InVisible: Art at the Edge of Perception’’ brings together six artists, each one taking the idea of self-effacement to a fertile extreme. In “Preliminary Drawings for Show, Erased,’’ Spain’s Jaime Pitarch erased the entire contents of his sketchbook.

Similarly, the drawings of Australia’s Christian Capurro are in fact pages from pornographic magazines that have been painstakingly erased. Capurro places one page on top of another, and by erasing the imagery above leaves an imprint on the page beneath. This imprint is then “whited out’’ with correction fluid.

The effect is visually beguiling (one can still see the faintest of outlines) yet ambivalent. From a feminist perspective, you could see Capurro’s erasure as politically liberating. Alternatively - or simultaneously - you could see in his process the suppression of libidinous impulses. If that’s what’s going on, what is sublimated and how does it reappear? Is the “work’’ of erasure, now presented as a “work’’ of art, politically charged, or rather pointless?

Intriguing works by New Mexico’s Joanne Lefrak construct convincing landscapes by means of shadows cast by scratches in plexiglass, while other artists in the show play with varying degrees of visual restraint to achieve richly subdued effects.

The show was organized by Katia Zavistovski, the result of a collaboration between the Sterling and Francine Clark Art Institute, Mass MoCA, and Williams College. That college’s art museum up the road in Williamstown is also, as mentioned earlier, screening a Manglano-Ovalle video called “Juggernaut.’’ In a darkened room, we see the rumbling tires of a huge salt-mining truck crossing the vast salt flats of the El Vizcaíno Biosphere Reserve in Mexico. As a protest against the human threat to the endangered gray whale, which apparently mates nearby, the work strikes me as a well-intentioned flop. But as an image of concentrated dread, there’s no denying its success.

The WCMA was also hosting a show rooted in collaboration - in this case, between artists and neuroscientists - called “Landscapes of the Mind: Contemporary Artists Contemplate the Brain.’’ Based on the fruits of hospital residences and discussions with neuroscientists, the works in it by Britain’s Susan Aldworth and Andrew Carnie, Australia’s Jessica Rankin, and America’s Katy Schimert all grapple with the problem of visualizing and locating the mind.

Aldworth’s frenzied etchings, made with marker on an etching plate, suggest the speed and intensity of blood flow in the brain. Unfortunately, the show as a whole, which is accompanied by a photocopied folder explaining some of the basics of neuroscience, has the whiff of a conference call: lots of shared information, scant resolution.

Next stop Pittsfield and the wonderful Berkshire Art Museum, currently host to “Armed and Dangerous: Art of the Arsenal.’’ Drawn primarily from the museum’s permanent collection, with loans from the Higgins Armory, in Worcester, the exhibition presents an overview of weapons and armor from different cultures and periods. It even includes displays about armor in the animal kingdom.

Waging war, on the evidence here, has always been inseparable from showing off the means to wage it. Objects like the Sioux headdress, the acorn-shaped Samurai helmet, and the astonishing Moro swords from the Philippines bespeak seduction and flamboyance as much as belligerence.

I loved the shapes of the lipped clubs from Fiji and Samoa - they had the efficiency and linear simplicity of plants. I admired, too, the wakizashi sword from Japan, an object of extreme delicacy and refinement that was, says the wall text, “used for either decapitating a beaten opponent when taking heads in the battlefield, or ritual suicide.’’

There’s the show in a nutshell.

An hour away by car is the Smith College Museum of Art in Northampton, host to one of the finest permanent collections in New England. Right now, it’s showing “Kin and Kindred: Reflections on Childhood,’’ an exhibition culled from the collection. It presents a slew of images on the theme of mother and child, from a 16th-century Flemish painting to a 20th-century Matisse print, as well as all manner of portraits of rosy-cheeked children. But for every creamy dollop of sentimentality there is an acid infusion of reality from artists like the photographer Weegee.

In the college’s nearby botanic garden is a sound installation, “What Every Gardener Knows,’’ by the acclaimed British artist Susan Hiller. Hiller graduated from Smith in 1961; the botanic garden was one of her favorite haunts on campus. In the garden’s lush and humid palm house, she has installed speakers that emit carillon music every 15 minutes.

The music, which Hiller wrote herself, is based on numerical ratios deduced by Gregor Johann Mendel, the Augustinian monk who fathered modern genetics with his theory of inherited traits. Hiller’s musical translation of Mendel’s code is conspicuously modest, but it struck me as a more elegant meeting of science and art than the works in the Williams museum’s show about neuroscience.

Finally, the nearby Mount Holyoke College Art Museum has a scholarly exhibition about panel painting in early Renaissance Italy. The show, a collaboration with Middlebury College, effectively smothers the romantic view of early Renaissance devotional imagery - the vision that celebrates stylistic originality and individual genius - in order to remind us that panel painting was a conservative endeavor circumscribed by an elaborate system of patronage, as well as stable conventions of technique and symbolism.

The effect, frankly, is deflating. The show is more edifying than exciting. But it tells, with sober clarity, an important part of a fabled story. Among the six works from Mount Holyoke’s collection and the 14 borrowed from other collections, are paintings by Gentile da Fabriano, Giovanni del Biondo and Lippo d’Andrea. After I took it in, I strolled outside, blinked once or twice, and began the slow drive home. 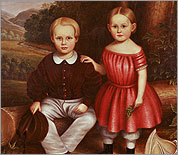 "Portrait of a Young Brother and Sister" (detail), attributed to Isaac H. Keeley, is part of "Kin and Kindred: Reflection on Childhood, "at Smith College Museum of Art.

GRAVITY IS A FORCE TO BE RECKONED WITH

INVISIBLE: Art at the Edge of Perception

LANDSCAPES OF THE MIND: Contemporary Artists Contemplate the Brain

ARMED & DANGEROUS: Art of the Arsenal

KIN AND KINDRED: Reflections on Childhood

SUSAN HILLER: What Every Gardener Knows

THE ART OF DEVOTION: Panel Painting in Early Renaissance Italy