Winter’s weight and what lies below 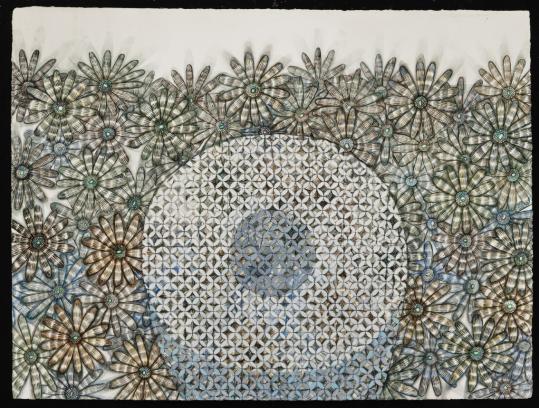 The first thing you notice about “In Winter,’’ Gail Spaien’s exhibit at Miller Block Gallery, is that her watercolor and gouache paintings hang at floor level; two actually rest on the floor. Above them, she has painted the wall. “In Winter’’ is meant to create the sense of being enveloped by the season, but it’s also a rigorous inquiry into representation, and how it can be stretched and still hold to its intent.

The wall painting is the most abstract: Passages of beige and pale blue feel muffled but bright, the way an overcast sky can sometimes carry a glare. Grids of white and beige brushstrokes evoke snowfall. Below, the individual pieces feature two motifs: pinwheeling, daisy-type blooms in blue and metallic brown, and veils of white and blue made from grids of small interlocking circles.

Flowers and snowflakes? Not exactly. Spaien has flattened the flowers, abstracting them into something closer to a wallpaper pattern than a garden. Even so, it’s striking to note that the pallid veils floating over portions of them cultivate an illusion of space and toy with our perception of what lies beneath. “In Winter #3’’ sports the gauzy white grid on either side, opening like a curtain to reveal the spinning blossoms, with more glimpsed just off stage.

A low bench invites the viewer to examine the paintings more closely. Most of the visual weight takes place beneath the airy wall painting, which gives the installation an unexpected gravity. It’s a bit wintry, but the show turns out to be more about art than it is about snow.

Circles of women
Lana Z Caplan has set up a nifty little viewing room for her installation of several videos delving into societal expectations about women at Gallery NAGA. Her main focus is on spectating, and the relationship between viewer and viewed.

The role of the spectator has been hot in art theory in recent years (Caplan’s previous show at NAGA, photos of public execution sites, touched on the topic). Bringing it to bear on women circles back to older feminist theory about how an artist objectifies his model. In this realm, it’s easy to tread into all-too familiar territory, and Caplan does that sometimes.

“Sanctimonia 1’’ and “Sanctimonia 2’’ positions a video of pop star Madonna gyrating onstage beside a video of men shouldering a statue of the Madonna and child - hardly a new comparison, even if you’re looking at the role of the audience (or worshipers) - in the iconography of both Madonnas.

On the other hand, “Portrait,’’ which follows the sometimes salty conversation of elderly Italian women as they note that they are being videotaped, is a funny elucidation of the awkward self-awareness of people sitting for a portrait. Watching and knowingly being watched are juicy topics, but difficult to explore when women and sexuality are central to the discussion, just because imagery of women being watched (or objectified) is everywhere.

Also at NAGA, Esther Solondz achieves a remarkable psychological depth in her portraits of imaginary people, each named after a rose. Solondz “draws’’ with steel fibers, assembling them on paper and then applying water - an imprecise technique, open to all kinds of chance and mishap. “Agathe Fatime’’ is drawn with economical gestures: a woman’s soulful sad eyes, a small nose, and just a hint of pink and blue-gray around the mouth. Her hair and dress are vivid with rusty fibers, snarled and frayed. Solondz captures a sense of someone in the process of fading away, with only fine lines and bruises left of the flesh.

Overlapping ideas
I didn’t have high hopes for “AMALGAM,’’ the group show at the Mills Gallery at the Boston Center for the Arts, because the artists were drawn from a limited pool: those who have studios at the BCA, of which there are 55. The works range from Ken Clark’s helix-like kinetic sculptures to Robert Rovenolt’s assemblages of found objects. It takes a wily and imaginative curator to put such a range together effectively, and the BCA found one in Evan J. Garza.

Garza has in fact put together two shows. The succinct, smaller exhibit, “Different Kind of Monster,’’ features startling animal-based sculptures, watercolors, and drawings by Rebecca Greene, Miriam Shenitzer, and Kathleen A. Kneeland, all of which inquire into our own animal natures.

That’s an easy one to curate. “AMALGAM,’’ which tackles the much broader theme of making one piece out of fragments, works because there are many delicious overlaps. Clark’s “Distractor 11’’ is based on the Fibonacci sequence; it fits handily with David Lloyd Brown’s stenciled, wheeling abstract drawings, also based on that numerical pattern.

Rovenolt’s color-saturated “Blue Field’’ hangs beside David Reichert’s mixed-media painting “Hans LOL, will c u later,’’ a tribute to Hans Hofmann, who could have inspired Rovenolt’s palette. Lazaro Montano’s “Language of Color (Benjamin Moore paint colors alphabetized and grouped by name)’’ plays a conceptual game of chance with tonal arrangement. In the end, it’s not the pieces that hold this amalgamation of a show together; it’s the confluences among them.