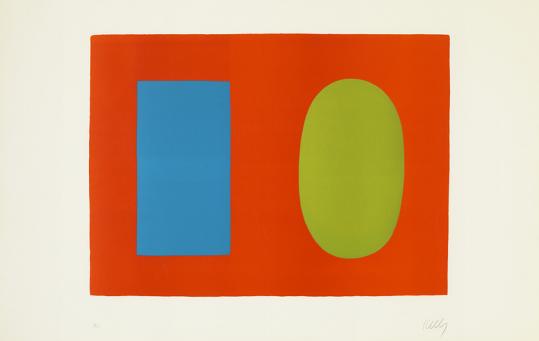 “Blue and Green Over Orange’’ is one of two Ellsworth Kelly lithographs that open “The Shape of Abstraction’’ at the Boston University Art Gallery.
By Sebastian Smee Globe Staff / February 12, 2010

Step out of the roar of traffic, road signs, billboards, and winter weather into “The Shape of Abstraction,’’ a quietly entrancing show at the Boston University Art Gallery, and - even without the benefit of the yawning gallery attendant - time immediately slows. The eyes stop their anxious, dizzying dance - glancing and glimpsing, never really locking in - and thought silently blooms in concert with seeing.

This is a landmark exhibition of - paradoxically - modest work. The exhibition checklist may boast several stars of modern and contemporary art: Ellsworth Kelly, Josef Albers, Jean Arp, Frantisek Kupka, Fred Sandback, Louise Bourgeois. But there are no out-and-out masterpieces, the works are almost all small, and the prevailing mood is modest, minimal, quietly exploratory.

The show has been organized by Rachael Arauz, an independent curator based in Boston. Its title has a generic air, but the emphasis throughout truly is on shapes. Not lines, not drips, not painterly swipes and swishes, but shapes.

A lot of the shapes in question have straight edges. Even when they are diagonals, these harmonize with the works’ conventional, rectilinear borders. Straight lines, it seems, seek other straight lines.

In other works, the shapes are curvy: They swell and shrink, taper and twist, defying frames, yearning for the world beyond, for eggs and sperm and planetary spheres.

It’s child’s play, of course, this finding differences between one kind of shape and another, between this color and that. But in their dogged insistence on simplicity, on first principles, the artists here uncover wonders.

I rate Kelly as the 20th century’s most marvelous poet of abstract shapes. So I was happy to see two Kelly lithographs open the show. One presents an orange shape against a lime green ground: Zing!

The second sets a green oval (the same lime green) against an orange ground (the same orange), but with the added element of a bright blue rectangle. Thus figure becomes ground, one shape becomes two, two colors become three.

As with the construction of musical chords, so much relational complexity nests within the simplest shifts.

The next few works, by the likes of Sol LeWitt, Gert Marcus, Ralph Coburn, and Burgoyne Diller, make play with similarly simple shifts: squares divided in four, shapes derived from a cube and rearranged to suggest new forms, colors establishing the simplest contrasts.

The hanging is deft. Works with familial links are grouped together, but subtly, never didactically.

Some of the most surprising work is made from unusual materials. Coburn, who was close to Kelly, has a work made from vinyl tiles. There are several sculptures, including a wall piece made by Richard Rezac from painted cherry and poplar woods.

Suzan Frecon, meanwhile, has allowed brown watercolor to pool on “agate burnished old India ledger paper.’’ And Fred Sandback has an elegant corner piece made from nothing but thin blue elastic cord and spring steel.

A pocket of works restricted to black-and-white all play with figure and ground, positive and negative: Hélio Oiticica shifts black rectangles into parallelograms, and immediately a static grid takes on a jazzy syncopation.

Kupka breaks into a perfect black circle with a square that is the same color as the work’s cream surface. That square, which sits right at the center of the work (itself a square), also cuts into a rectangular field of horizontal black stripes.

Thus the square establishes its preeminence. And yet it is, in relation to the “ground,’’ an absence, a nothing. What secret force there is in the unsaid, the unseen, the negatively defined!

Albers spent 25 years obsessing over the properties of squares. “Study for Homage to the Square: In Stucco’’ and “Portal to Green,’’ both displayed here, place squares of different dimensions inside one another to create endless ambiguities of space and - not incidentally - glancing effusions of beauty.

But it’s not all straight lines and fearful symmetries. In fact, Albers himself cuts loose in a 1933 linocut, bisecting ovoid and teardrop shapes with looping lines. The shapes defined by all these intersecting lines form a checked black-and-white pattern. The effect is exuberant.

Further on, Jean Arp, an undersung champion of biomorphic abstraction, lets himself go even further with a set of 12 collaged shapes, black on white. Made late in Arp’s life for a book of his poems, “L’Ange et la Rose,’’ the small shapes have no up or down. They float and wriggle across the white surface, like dark fugitives from Matisse’s late cut-outs, responding to who knows what little pressures of ecstatic expansion and nervy withdrawal.

Thomas Nozkowski, a contemporary painter who shuns formula even as he adores shapes, patterns, and the endless potential of paint, adds proofs to this proposition. In one of two paintings here, he sets curving shapes colored yellow, blue, pink, and cream against a fraying brown background, like worn velvet. The shapes reiterate one another’s arching sides and tapering points. They seem to want to fit together. But they remain sovereign, apart.

Does abstract art remain apart from the world?

Never. Every abstract shape is a distillation or echo of things out there in the world. Abstract art has to be modest these days (the eras of Mondrian, Malevich, Kandinsky, Klee, Pollock, and Rothko are over). But it continues to serve a large purpose. It is an invitation to dream without distraction, to rediscover aspects of reality we had shunned, or failed to see.