The best exhibitions of the year

Despite tough economy, some notable shows 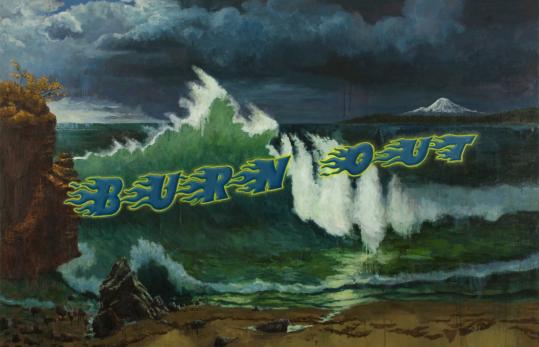 To some, art is a necessity, but to many, art is a luxury, and one that gets shelved in a tight economy. This year has been a struggle for many commercial art galleries. As the recession trimmed away at personal and institutional budgets, art acquisitions were often put on hold, and business ebbed for many galleries. In 2009, OH+T Gallery closed on Harrison Avenue. On Newbury Street, Kidder Smith Gallery shuttered, Mercury Gallery defected to its Rockport satellite, and, most startling, Nielsen Gallery ended its brick-and-mortar operation after 46 years at 179 Newbury St.

Nina Nielsen said that although the economy played into the decision to close up shop, it was time for her and husband and co-owner John Baker to retire. Still, on Newbury Street, the art scene had lost the equivalent of one of its anchor stores. For decades, Newbury Street has been gallery central, and while several important galleries are still thriving there - Barbara Krakow Gallery and Judi Rotenberg Gallery are must-sees for any contemporary art lover in town - the scene there has suffered.

Meanwhile, despite OH+T’s closing, the Thayer Street pedestrian mall between 450 and 460 Harrison Avenue appears to be weathering the storm, and it feels like a hive of activity for contemporary art. Two galleries that opened there in late 2008 as the economy sputtered, Walker Contemporary and anthony greaney, are always worth a visit. In 2009, Chase Gallery followed Howard Yezerski Gallery’s lead of the year before and left Newbury Street for Harrison Avenue, where rents are considerably cheaper. And samson, like Steven Zevitas Gallery in 2008, has expanded its square footage.

Still, when it came to the best exhibitions of the year, Newbury Street held its own. Barbara Krakow Gallery started 2009 with a head-spinning Annette Lemieux exhibit, “Taking Stock,’’ which cleverly wove together Sarah Palin, George Orwell, and Wonder Bread in an examination of how idioms, metaphors, and patterns evolve over time. And Peter Downsbrough, in his wickedly clever self-titled show at Krakow, deployed words and lines to baffle viewers’ expectations about space and measurement.

Nielsen Gallery staged “At the Center . . . In the Eye,’’ a striking group show of three late artists, Martín Ramírez, Porfirio DiDonna, and Forrest Bess, who shrugged off any interest in art history or art theory to follow their own fevered lights. The works were peculiar, impassioned, and defiantly original. At the other end of the inside-art spectrum, Daniel Phillips’s video show at Judi Rotenberg Gallery, “Inherent Tendencies Toward Disorganization,’’ featured thousands of still photos of his studio floor strung together into videos that ingeniously addressed painterly issues such as abstraction, surface, depth, and composition.

Hank Gilpin, a woodworking artist who had long resisted staging a gallery show, finally acceded to the invitations of Gallery NAGA directors Arthur Dion and Meg White. His “New Furniture and a Display of Commissioned Projects’’ was sumptuous and playful. Gilpin takes his inspiration from his wood’s inherent beauty, and the surfaces and grains he showed off with his elegant forms were breathtaking.

For creative thinking regarding the economy, kudos go to artist Aaron L. Peterman and gallerist Ellen Miller at Miller Block Gallery for “The Boston Store: prototype’’ (up through Jan. 12), which cheekily includes a little retail store-cum-art installation alongside Peterman’s dazzling folded paper sculptures, pinwheeling with Boston iconography such as the Hancock Tower and Fenway Park. His retail products, such as teddy bears and tote bags, do the same.

In South Boston, LaMontagne Gallery has staged some terrific painting shows this year, chief among them Joe Wardwell’s “Die Young,’’ which blended the flash of rock ’n’ roll typography with gorgeously rendered scenes of the American West. The results were stark, comic, and deeply engaged with art history and its description of American identity.

Matthew Rich’s “IRE & ICE’’ at samson was full of artworks that looked scruffy and taped together. Each one of them danced with startling virtuosity between poles of flatness and three-dimensionality, representation and abstraction, fine art and art that should be tacked to your refrigerator with a magnet.

Octogenarian French filmmaker Agnès Varda crossed from cinema to art gallery with her bold and tender installation “Les Veuves de Noirmoutier (The Widows of Noirmoutier)’’ at Harvard’s Carpenter Center for the Visual Arts. The piece was a mosaic of narratives, with several small video projections circling a larger one of widows pacing around an empty table on a beach. The smaller ones spotlighted the widows individually, and each spoke of her loss; they were a moving chorus of gratitude, love, and sorrow.

“And the fair Moon rejoices: contemporary visionaries in the wake of Blake,’’ organized by Randi Hopkins and Emily Isenberg for the Mills Gallery at the Boston Center for the Arts, was a heart-thrumming celebration of the sentiments of poet, artist, and visionary William Blake. The art, such as Tania Kitchell’s black-and-white photographs of her own breath on a cold night and Sharon Harper’s four-channel video of lightning stuttering across the sky, carried the freight of life’s fragility and the terrific power of inspiration, generation, and growth. At a time when many were feeling pinched and anxious, it was a show charged with hope.

“And the fair Moon rejoices: contemporary visionaries in the wake of Blake’’ (Mills Gallery, Boston Center for the Arts)