He changed the way we look at US 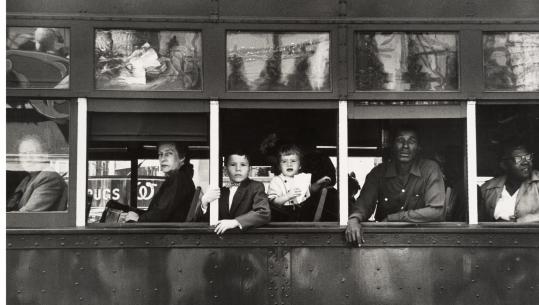 Well, yes and no. Robert Frank’s “The Americans’’ certainly is a book, one that consists of 83 photographs taken during 1955 and 1956. But to say it’s “just’’ a book is like saying the same thing about “Moby-Dick.’’ Both works are central, defining documents of American culture. What the white whale was for Ahab, a red, white, and blue nation was for Frank. Ahab employed a harpoon. Frank used a camera. Unlike Ahab, he not only managed to capture his prey, he survived. Frank turned 85 on Nov. 9.

This year marks the 50th anniversary of the US publication of “The Americans.’’ (The French edition came out a year earlier.) To observe the occasion, the National Gallery of Art has organized a superbly comprehensive exhibition, “Looking In: Robert Frank’s ‘The Americans.’ ’’ After stops earlier this year at the National Gallery and the San Francisco Museum of Modern Art, it’s at the Metropolitan Museum of Art through Jan. 3.

“Looking In’’ is just right as a title. Seeing, an act that’s optical in nature, is as much passive as active. Looking, an act that’s not just optical but directive, is inherently active. It’s no accident that the first photograph in “The Americans’’ shows both an American flag and people watching.

Looking at America, Frank took in things others had seen but failed to note. Some were banal: jukeboxes, the ubiquity of flags, the many manifestations of automotive culture. Other elements - vaguer, abstract, even sinister - were anything but banal: a sense of isolation, the place of African-Americans in US society, a tension between openness and confinement. The latter is evident in everything from the sweep of a Southwestern landscape to the flickering image on a TV screen. Precisely because Frank’s exteriors look so large, even boundless, his interiors (bars, elevators, the inside of an automobile) feel so constricting.

So much of what made “The Americans’’ revelatory was Frank’s functioning as an outsider: looking in - per the title - as well as looking around. “You’re inside,’’ he once said of his native Switzerland. “You know the future.’’ America, a nation of immigrants, of migrants (internal immigrants), is constantly reimagining the future. As Frank wrote in his application for the Guggenheim fellowship that would underwrite his photographic travels, “What I have in mind, then, is observation and record of what one naturalized American finds to see in the United States that signifies the kind of civilization born here and spreading elsewhere.’’

Frank came to the United States in 1947. He refused to settle into any standard photographic role, such as photojournalist or fashion photographer, though he did work as both. Also there were long excursions to Peru and Paris and Britain. Examples of the images he took from all three places are among the more than 60 photographs here from before and after “The Americans.’’ Besides a complete set of images from the book in sequence, the show includes 28 contact sheets, the maquette Frank made up for the book, a copy of his Guggenheim applications, and much else.

Fred Kaplan’s recent book “1959: The Year Everything Changed’’ has an excellent summary of how “The Americans’’ came to be and the impact it made. Preparing for the trip, Frank bought a used Ford and got maps from AAA. Sometimes he drove alone, sometimes with his wife and their two young children. He covered 10,000 miles, shot 767 rolls of film, exposed 27,000 frames, made 1,000 8-by-10-inch work prints. All that he distilled into those 83 pictures.

Half a century later, it’s a little hard to understand what made those pictures, either singly or as a whole, seem unprecedented. Make no mistake, they’re terrific, many of them images so familiar that even people with no interest in or awareness of art photography would still recognize them. But “The Americans’’ proved so influential - shaping photographers as important as Garry Winogrand and Lee Friedlander and Danny Lyon and countless others - that it’s difficult to see now what made the book such a departure then. Succeeding so well in remaking photography, “The Americans’’ obscured itself.

Frank’s pictures are intuitive, casual, as interested in evocation as documentation (no, more interested). “It was just pure feeling that I expressed visually,’’ he said of his response to his subject matter. His approach consisted not of “looking at [America] but feeling something from it.’’ Those are the words of a poet - though there’s nothing soft or sentimental about Frank’s pictures - and Jack Kerouac, in his famous introduction to the book, rightly described it as a “sad poem.’’ (Copies of Kerouac’s drafts for the introduction are in the show.)

The sadness could be exaggerated, though, and it was. Many reviewers saw Frank’s book as an attack on America: a rejection rather than the bittersweet embrace it is. “The Americans’’ bears witness to a larger, stranger, more mythic America than anyone had ever previously presented. No other photographer has made a body of work that’s managed to look so matter-of-factly mythic. The matter-of-factness is crucial. For all Frank’s ambition, there’s nothing bombastic or monumental about these pictures.

Maybe bombast would have reassured people. Mount Rushmore gets more visitors than Antietam. A writer in Popular Photography turned Kerouac’s tribute against “The Americans,’’ calling it “A sad poem for sick people.’’ Another writer for the magazine dismissed the book as “a wart-covered picture of America.’’

Few things are as disquieting as skeptical lyricism, and that’s the mode much of “The Americans’’ is in. There’s so much strangeness here - New York cowboys, out-of-focus movie stars - and hardly any humor to make it palatable. The tuba player whose instrument conceals his upper body does look awfully funny, though, rivaling in hilarity the top-hatted politician who seems to be kissing the air.

Again and again we see people staring off into space, that most accessible - if also most fleeting - way of escape. Yet what Frank’s critics overlooked in their I-like-Ike ire was how deeply Frank was tapping into American tradition. What’s more American than alienation? No alienation would mean no Puritans, no pioneers (for that matter, no Ahab). The pursuit of happiness implies an escape from unhappiness. Huck didn’t light out for the territory at the behest of the League of Women Voters.

The 19th century had Alexis de Tocqueville, in “Democracy in America,’’ describing and analyzing. The 20th had Frank showing and recording. An abiding sense of discovery informs “The Americans’’ - or, rather, a balance between discovery and irreducible mystery. There’s so much to find out in this continent-sized country, and so much that can never be known. For all that Frank can show us those people staring off into space, neither he nor we can ever know what moves them to do so.

“Reality became a mystery,’’ Frank has said of Bill Brandt’s photographs. Brandt had been a strong early influence on Frank, as evident in his remarkable photographs of London bankers and Welsh miners.

Walker Evans was the great influence on “The Americans.’’ Frank took a copy of Evans’s “American Photographs’’ on his travels. That influence was practical as well as artistic. Evans wrote a recommendation for Frank’s Guggenheim, and helped him revise his application. Two of the more memorable items in the show are letters Frank wrote to Evans from the road. He knew how much Evans, a connoisseur of such things, would appreciate the stationery from places he stayed in Roswell, Texas, and Butte, Mont.

Part of what makes the relationship between the two men and their work so moving is Evans’s recognition of how fundamentally Frank’s artistry differed from his own. There was disavowal as well as admiration in a note Evans wrote to himself: “Franks technique, characteristic of F himself, it is fast bold sure eminently unfussy and in a sense seems almost contentious of all photo technique.’’

Unfussy Evans was not. Formality and classicism define his work, an approach that serves to elevate his stalwart nostalgia and reverence for the vernacular. The past moves Evans deeply. Frank is informal, modern, embraces the vernacular (he may not even recognize that vernacular is what it is), while nostalgia has no place in his visual vocabulary. Old and new were equally novel to him. America was part of both a New World and a new world. Frank wouldn’t mourn the past - couldn’t mourn it - because to him the past was new, too.

Recognizing that Frank’s greatness differed from his own, Evans recognized that greatness nonetheless. “If that were a hammer in [Frank’s] hand he would drive the nail in one or two hard fast perfect strokes,’’ Evans wrote in 1957. “But not usually careful. There wd be a hammer mark in the wood and the boards wd be joined forever.’’ Joined forever, one might say, in a more perfect union.

LOOKING IN: Robert Frank’s ‘The Americans’