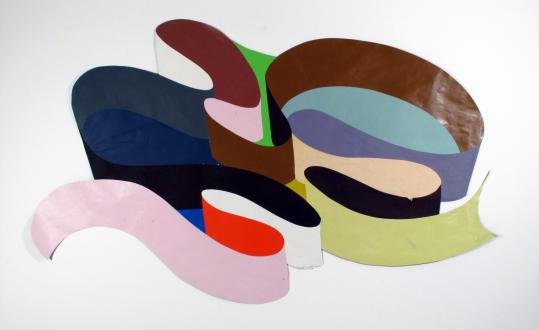 In Matthew Rich's painted-paper construction "Ribbon," each time the form doubles back, its colors change. Even the ground beneath the ribbon changes tones. (Matthew Rich and Samson Gallery)
By Cate McQuaid Globe Correspondent / November 11, 2009

“So what is this show?’’ Matthew Rich asks in his artist’s statement for “IRE & ICE,’’ his solo exhibit at samson. “In and out, single and multiple, intention and accident, refined and crappy . . .’’

He goes on. It’s the sort of non-specific artist’s statement that can drive a concrete thinker crazy. But often, art that successfully marries opposites breaks old molds. It’s true here. Rich’s painted paper constructions are sharply intelligent and often surprising. Rich thoughtfully crafts every element. At the same time, his pieces look battered, like something you’d find tacked to a refrigerator with a magnet.

Rich makes his work out of pieces of paper that are painted and fastened together with linen tape. In “Ribbon,’’ he has us looking down upon a ribbon looping backward. Each time it doubles back, colors change. Even the ground beneath the ribbon changes tones. A small trapezoid near the center, colored like the sun shining through olive oil, feels like the work’s origin point.

Constantly switching tones pits the piece’s flatness against its pictorial qualities. Then there are the nicks and wrinkles, even a piece of tape, that evoke another way to view the piece, pulling us out of its spell of color and form and pointing to the fragile material and the artist’s hand.

Rich pointedly titles one of his pieces “Ampersand,’’ as if its task is that of a bridge. It’s the most angular work in the show; it looks as if he’s cut open a cardboard box and laid the carcass flat on the wall, except here and there it has big, arcing hinges.

Again, the way he lays the pieces together has flatness vying against three-dimensionality. He’s daring with color, veering from lurid green to subtler browns. He deploys the very same latex white with which the gallery wall is painted. Up close, the piece, like any on your refrigerator, curls and billows a bit at the edges, and here we see that Rich has painted the underside of his white sections neon orange, which reflects off the wall, creating a steamy little halo. Each of the works in this exhibit, scuffed and torn though they may be, offers a trove of visual puzzles and challenges. They are humble, but they are deep.

Process and product
Rich’s mother, Ellen Rich, has been a regular in the Boston art world for decades, exploring some of the same intersections of volume and flatness. She is in a clever group show, “Construction,’’ in the Suffolk University Art Gallery at New England School of Art and Design (both Richs will be in a group show at Nesto Gallery, Milton Academy, opening in December).

“Construction,’’ organized by James Hull, focuses on work in which the process of making is evident in the final product. They share an aesthetic of unpretentious materiality. There’s a scrappy quality to the show, but it’s never amateurish. For instance, Laura Evans’s “Reclining’’ is a simple thing, an unadorned cardboard tube, but she has neatly sectioned and reassembled it into a form that recalls a reclining nude and generations of art history. Ellen Rich’s “Green Down the Middle’’ is a hybrid wall sculpture and painting crafted from wood slats in degrees of green and chunks of foam rubber, put together in a rough, three-dimensional grid, at once garish and modest.

Jeff Smith twits corporate branding and corporate culture with “United Triangle Technologies,’’ a wooden pyramid sculpture made up of smaller pyramids; it’s falling apart at the top because one piece doesn’t quite fit with the rest.

Isabel Riley blends textile and sculpture in “Interior Ticking,’’ pressing mattress ticking tightly between yellow wooden slats, as if the mattress has somehow burrowed into and been trapped by the bed frame. These lead ominously to an upright wooden box made of compressed wood and painted pink on the inside. It’s quite beautifully formal, yet laced with a sense of confinement and threat.

Intrigue under the surface
Elif Soyer catalyzes her paintings and drawings at Kingston Gallery with layers of whirling biomorphic forms that refer to body parts, neuronal pathways, and elements of Islamic design, among other things. But what matters most is Soyer’s exploration of space. Her layering method is deliciously sophisticated: Some forms are solid, some translucent; she collages some onto the surface; she draws as well as paints; and she also uses washes of color that veil the shapes, but some still pop out. In my favorite piece, “Blindness,’’ all takes place under a haze of white - bright tones, turquoises and yellows, solid forms and shadowy ones. It’s a tremendous amount of intrigue just beneath the surface.

Also at Kingston, Linda Leslie Brown shows photographs of her installation at the Hambidge Center for the Arts in Georgia over the summer, where she mounted wires strung with crystals in the woods. The result appears to have been quite magical, the work of fairies or enormous spiders. It would be great fun to see such an installation in person.