What a posh hotel and a new library share

Architect creates transparency in both sites 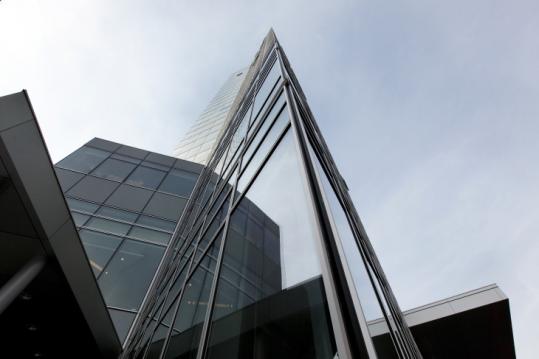 Glass buildings in Boston are often seen as shiny interlopers in a city that prides itself on its historic look and its natural materials: brick town houses, granite wharves, wood triple-deckers.

Maybe that’s changing. Glass, like anything else, can be done well or badly. In two buildings that opened on Thursday, it’s done well. The principal designer of both was the same architect, Boston’s William Rawn.

One building is a gem. The other isn’t quite that, but it’s interesting. The first is the new main branch of the Cambridge Public Library, and the second is the W Boston complex in Park Square.

Glass, as a building material, tends to convey two messages. One: “We’re modern.’’ Two: “We’re transparent.’’ Both messages are clear in the architecture of these buildings.

Let’s start with the W Boston Hotel and Residences. This is a 26-story combination hotel and condo tower at the corner of Tremont and Stuart streets in the middle of the Theatre District. There are 235 hotel rooms and 123 condos, plus two bars, a restaurant, underground parking, and such yet-to-be-finished amenities as a health club and a nightclub. cost is $234 million.

Transparency is what saves the W from feeling too big. When you look up at it from outside, daylight seeps through its sharply angled glass corners. These edges seem to dissolve into thin air. You can’t see the columns and beams of the structural frame, either, because they’re set back behind the glass. As a result, the clear glass with its white mullions feels like a delicate, open-weave fabric that’s been stretched taut across the facades.

Transparency happens at the street, too. Walking past the glass facade you feel that the interior lobby - it’s called the Living Room - is a widened extension of the sidewalk. Indoor tables and lights feel like parts of an outdoor cafe. At night, streetscape and lobby merge through the glass when the interior is illuminated.

Not everyone loves high-rises, which can be disruptive. But the W takes its place in an urban design concept that’s long been part of Boston’s DNA. This is the so-called High Spine, the dorsal fin of towers that moves out from downtown along a seam between the Back Bay and the South End. It’s a corridor where high-rises cluster near public transit while leaving historic neighborhoods untouched. As part of this spine, the W strengthens the visual shape of Boston at the same time that it signals the presence of the Theatre District.

Rawn designed the tower, working with the firm TRO/Jung Brannen, but he didn’t do the interiors. All finishes and furnishings are by New York architects Bentel & Bentel, who did the marvelous Modern restaurant at the Museum of Modern Art. Here, though, they’ve done less well.

The W’s interior suffers from a mania for what the W folks call “theming.’’ I was told that the Living Room should remind me of stone garden walls, climbing ivy, campfires, paved sidewalks, the Public Garden, Harvard and MIT, Boston granite, village elm trees, neon lights, stage prosceniums, and I forget what else. Sheer metal drapes hang like vines and water slides down the backs of seats. A wall of rough granite blocks confronts you as you enter. Details are elegant, but the overall effect is crowded and the boxy seating is uncomfortable.

Bentel & Bentel’s hotel rooms upstairs are much better, sexy without being camp, and their restaurant, called Market (the theme here is the Massachusetts coast, though you’d never guess), is handsome in a noirish way.

The two buildings, new and old, stand side by side - shoulder to shoulder, you might say - facing south in a green park, as if posing for a family photo. Just next door is Cambridge Rindge & Latin High School, which provides a ready supply of kids to hang out in both the library and the park.

Rawn’s glass wall is what you notice first. The architect claims it’s unique in this country. It’s modeled after recent technology in Europe and in fact was manufactured in Germany. It’s a double wall, a sandwich of two sheets of glass with a three-foot space between. This interstitial space contains shades and blinds, both of which move automatically with the sun to control heat and glare. The glass is perfectly clear, so that when you’re inside looking out, you feel you’re also in the park, and when you’re outside looking in, you can see all the way through the building. The goal was to create a library that would feel open and welcoming to everyone in the diverse community that is today’s Cambridge.

“I insisted on three rules,’’ said Susan Flannery, the library director. “One, you must see books immediately as you enter. Two, there must be operable windows. Three, there must be no children in the basement, where they’re too often tucked away.’’ The children’s room here is on the third floor of the new wing, with furnishings by Beha that are meant to suggest (theming again) an aerial tree house with a leafy ceiling mural.

Flannery said she wanted to create a “hybrid’’ that would mix the qualities of a library and a retail bookstore. All books are on open shelves, and Flannery hopes to bring in students from the high school’s culinary arts program to sell baked goods.

As for the old library, it’s been treated commendably. Oak walls and ceilings were lovingly restored. So were the murals, created in 1934 by artists in one of the economic stimulus programs of the Roosevelt administration. (Will anything as memorable come out of the Obama stimulus?)

To make sure the old library would be used, Rawn and Beha agreed to site the teen lounge there, and also a dozen public access computers. Beha’s teen lounge is another gem, a high baronial loft, lit like a party space and filled with books (including comics) that were carefully selected to have absolutely nothing to do with the kids’ course work.

Everything about the old library is rich and dark. Wrapping you closely in a warm blanket of architecture, it’s the opposite of the airy transparency of the new wing. Each building foregrounds the virtues of the other. Together they merge into a single building, neither wing trying to upstage the other.

I have only one reservation about this superb new/old building. The high-tech double-glass wall, with its sophisticated moving parts, may prove difficult to maintain in a public building in the United States. The wall was expensive, and both Rawn and the city of Cambridge think of it as a demonstration of a commitment to sustainability. Let’s hope the city keeps that promise.

Cambridge is famous for forcing any new development through a prolonged agony of citizen participation. The library was no exception. From beginning to end, its design and construction took 15 years. The final bill was $91 million, of which $10 million came from the state and the rest from Cambridge taxpayers. The library opens to the general public on Saturday.

Last May, Rawn’s firm was chosen by a national magazine as the best architecture office in the United States. Whether you buy that hype or not, these two new buildings are worthy additions to a region where we too often don’t aspire to architecture this fresh and thoughtful.

Inside the W Hotel