Musical about Lincoln made to order 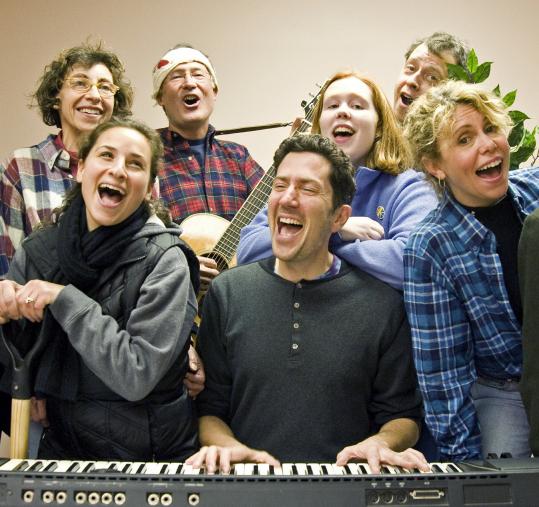 Rene Pfister plays the piano for a rehearsal of his musical “An American Town’’ with (front, from left) Lauren Smith and Katherine Glass, and (back, from left) Jean Nigro, Peter Pease, Emily Jones, and Eric Hanselman.
(Jon Chase for The Boston Globe
)
By Denise Taylor Globe Correspondent / October 22, 2009

When words just are not enough, that’s where Rene Pfister of Stow comes in. Call on his Make Your Life a Musical service, and this longtime theater pro will translate your sentiments, memories, and family jokes into a perform-it-yourself, miniature Broadway-style show. Usually, his productions are seen only at private celebrations like birthdays and weddings. But this weekend he’s going public, after setting an entire community to music.

On Saturday, Pfister’s “An American Town’’ makes its debut at Codman Farm in Lincoln. Performed by the Lincoln Players, the score runs from odes to their hometown’s charms to rollicking tunes such as “The Dump,’’ about Lincoln’s hopping transfer station and recycling center, which includes these lines: “You’ve got to crush those, some of those are threes/ Each year it gets more difficult, we’re glad we have degrees.’’

Every lyric and storyline was drawn from interviews with residents. “When I work on one of these musicals, I try to listen to people and what they feel good about or even struggle with. Then I take that, get some ideas, and come back to them. I try to let it be a process, so I can really get to know the person or family,’’ said Pfister. “So while I was very excited to write a show about Lincoln, I was also a little nervous. It’s a little easier to gauge a family of four rather than an entire town.’’

But after a client suggested the project and the Lincoln Players, the Bemis Hall Lecture Series, and the town’s Cultural Council all gave their support, Pfister developed a plan. He mined for town stories and attitudes at public discussions, gathered personal memories via individual interviews, and devoured materials on the town’s history.

“Those ideas became the seeds for what would later become the songs and the ideas for the show,’’ said Pfister. “For instance, the song ‘Open Fields and Stone Walls’ is from a direct quote from two residents who said open fields and stone walls were why they lived in Lincoln. I heard that phrase and thought, ‘Oh, that’s a song.’ ’’

Pfister always encourages family members to contribute music and lyrics to his family projects. Likewise, he found local bards to help out with the Lincoln production. Local lawyer Peter Pease was recruited on sight after Pfister spotted him in town with guitar in hand.

“The show is going to be good. It’s got a nice amount of humor and a lot of musical integrity, and it’s really fun to sing.’’

Pfister, 42, founded Make Your Life a Musical in 2007. For the Berklee College of Music alum and veteran educator and performer, it was the logical next step.

“Throughout my years of teaching, I’ve been working with kids and families for 20 years doing community theater, and I always found ways to include the parents. And then in my personal life, I would write people songs for a wedding or a party. So I started thinking about a way to combine those two things.’’

Musically, he’s also a roamer, and customized musicals offer an outlet for his wide-ranging interests.

“I’ve always written across musical lines. I wrote theater songs and pop songs and rock songs and operetta, even though they told me at Berklee that I needed to narrow it to one thing,’’ said Pfister. “But now I can use that to my advantage. No matter who comes to me, whether they like rock or musical theater, I can go with the feel of who they are.’’

Clients rave not only about the fun of the process, but also about Pfister’s ability to help them communicate. When former NFL nose tackle Fred Smerlas of Sudbury turned 50, his family hired Pfister to create a 45-minute show. Witty tunes like “I Married a Nose Tackle’’ (about his snoring) delivered plenty of comedy. But the song “My Dad,’’ sung by his three children, brought the room, and Smerlas, to tears. The lyrics were just favorite fatherly moments - sitting on his shoulders, eating Chinese food on Friday nights, playing pickup football - but they hit a chord. (Clips can be heard on www.makeyourlifeamusical.com.)

“Not only does Rene help you say what you feel, but he helps you find out what those feelings are and then articulates them,’’ said Sudbury resident Ken Manning. “He’s a very sensitive soul and he listens really well, and then he’s able to translate what he’s picked up into a huge repertoire of musical skills.’’

Manning’s son Alexander is working with Pfister on a musical about freedom to celebrate his 13th birthday. “Zander’’ is dubbing the event his “Un-Mitzvah.’’ Manning and his wife, Kailia Star, are both involved.

“It’s very fun, and if I say something that isn’t clear, Rene will just ask me to explain and it helps me clear up my ideas,’’ Zander said.

Some clients, like the Star and Manning family, are brimming with stage talent, Pfister said, but he thrives on making the format work for anyone.

“As a teacher, I’ve been working with adults and kids with a wide range of talent for years. So, I’ve learned what helps a person who has a harder time to carry a tune,’’ said Pfister, adding that he also writes spoken lyrics for those who prefer not to sing. “But there’s nothing more touching than somebody singing from their heart no matter what their ability.’’

With the help of collaborator Jan Mankowsky, Pfister will do as little as write and perform one song, or create a family-performed show with a full band, lights, props, and sets. “It can be whatever you want to make it. Sometimes I say it’s like Mr. Potato Head, you can create it,’’ he said.

But every assignment shares one trait: All are originals. “There’s no cut and paste. There’s no ‘insert name here.’ Every song and show is brand new,’’ he said. “It’s what my mom taught me to do. She was a pianist and just beautiful at improv, and she could just sit down and play a feeling.

“And to me, that’s what music is about. It’s about communicating what we don’t know how to communicate with just words.’’

Have an idea for the Arts column? Please contact westarts@globe.com.